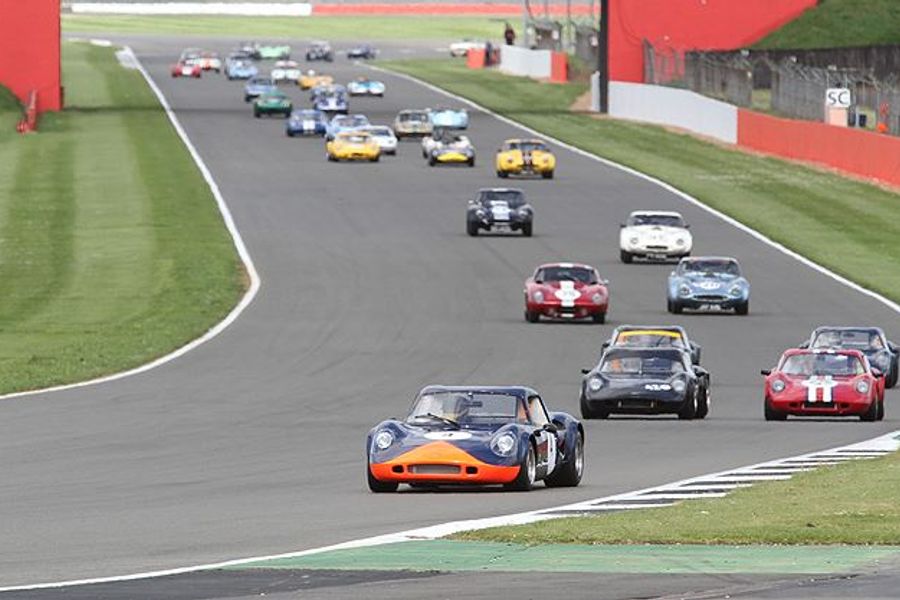 With a significantly increased crowd and a display of more than 50 classic cars in the paddock, the weekend was a big success both on and off the track. Despite torrential rain at one point on Saturday afternoon, the 15-race programme was successfully completed and the action was capped by double wins for Andrew Kirkaldy, Richard Evans, Richard Trott and Sam Wilson.

Evans was unstoppable in his Formula March 742 as he romped to a Derek Bell Trophy double, winning in the rain on Saturday and taking a second commanding win in the dry on Sunday. “The car is unbelievable in the fast corners round here,” said Evans. “I can’t think of a better car to race here.”

Martyn Donn (Lola T760) had a great run to second in the wet as conditions worsened and finally required an early halt to Saturday’s race. On a dry track the following day Jamie Brashaw moved up to second in his Formula 5000 March 73A. Max Smith-Hilliard was a welcome invitation runner as he gave his recently acquired Fittipaldi F5A F1 car a shakedown and completed Sunday’s podium.

Andrew Kirkaldy was back in the Sandy Watson team and scored an impressive pair of wins, partnering Watson in the Guards Trophy and then racing solo at the head of the 30-car field in the Pre ’80 Endurance race.

The Kirkaldy/Watson Chevron B8 was the dominant force in the Guards Trophy race and Kirkaldy went clear of the huge pack in the early laps. Watson then took the car over and raced to the flag. “He did the hard work,” said Watson of his co-driver.

Steve Brooks and Robert Beebee led the pursuit in their B8 and James Schryver made it an all-Chevron overall podium. In the GT class Mike Whitaker (TVR Griffith) and Simon Hadfield (Shelby Daytona Cobra) had a great contest and Whitaker won by less than a second. “That was 40 minutes of qualifying with Simon chasing me,” said a delighted Whitaker.

Kirkaldy’s second win came with a solo run in the Pre ’80 Endurance race in Watson’s Chevron B19. His task was eased by the retirement of John Burton when his Chevron B26 lost power and stopped. Also out was the Leo Voyazides/Simon Hadfield Lola T282, with an oil leak soon after Hadfield took over, so second place went to Philip Hall’s Lola T212.

The first of two Classic F3/Classic FF2000 races was held over to Sunday morning after Saturday’s downpour delayed the programme and it was an impressive performance from Richard Trott who took a classy win in his Chevron B43. David Shaw (Ralt RT1) was the big challenge to Trott and was attacking for the lead late in the second race when he spun. Defending champion Simon Jackson took advantage to grab second and just held off Shaw’s advances over the final lap while Marc Mercer twice topped the FF2000 pack.

Former hillclimber Mark Goodyear had one of his best results to date when he won the Classic Racing Car race in his Lotus 69 in the rain of Saturday as Robs Lamplough gave chase in his rare Palliser-based Winkelman WDB2. The concurrent Historic F3 race featured another battle between Jon Milicevic and Andrew Hibberd. This time around Milicevic just had the edge and the order was repeated on Sunday when the 1-litre F3s had a stand-alone race. Hibberd was on the attack when a moment lost him time and Milicevic was instantly away and gone. Peter Thompson (BT21) made it an all-Brabham podium.

Julian Barter’s Lotus Elan splashed to 70s Road Sports victory in Saturday’s rain as his father Charles (Datsun 240Z) led the pursuit. However Barter had to defend over the closing stages as racing legend Richard Attwood came through to a fine third in the Porsche 928 entered by Porsche Cars GB to honour the model’s 40th anniversary.

Both William Plant (Historic Road Sports) and Jack Drury (Historic Touring Cars) made it two wins from two rounds this season. Fellow Morgan pilot Kevin Kivlochan kept Plant honest although John Davison was heading for victory in his Lotus Elan until he inadvertently knocked the fuel pump switch off on the final lap. Drury, meanwhile, had to contend with a spirited chase from Rob Fenn’s Ford Mustang.

Sam Wilson took a clear double in Formula Junior with an unusually big advantage over the rest of the pack. Mark Woodhouse and Michael Hibberd were the nearest rivals as Richard Smeeton twice got the Wainer onto the podium.

The very worst of the weather played into the hands of Richard Tarling in the Historic Formula Ford 1600 race. For the second time this season, Michael O’Brien missed victory by a fraction of a second. With the capacity 54-car grid on its parade lap under black clouds, the rain and hail came down and the start was aborted. The track was very wet when the race started and anyone on dry settings was in trouble, including poleman Callum Grant.

Up front it was a contest between Tarling and O’Brien and though O’Brien tried to dive out on the sprint to the flag, Tarling was four-tenths ahead over the line. Benn Simms slithered the Jomo up to third from Grant while Sam Mitchell recovered from a couple of moments for fifth.

By now, Hadfield had gone ahead and made a fairly late second stop for Voyazides to finish the race, half a minute up on Reid. However, Hadfield had done around a minute more than the mandated 40-minute stint and they were handed a 90-second penalty and dropped to second. Phil Keen was dealt a cruel blow when the throttle linkage broke on John Clark’s Jaguar E-type on the final lap, so onto the podium went Fred Wakeman and Patrick Blakeney-Edwards in the Lister Jaguar Coupe.