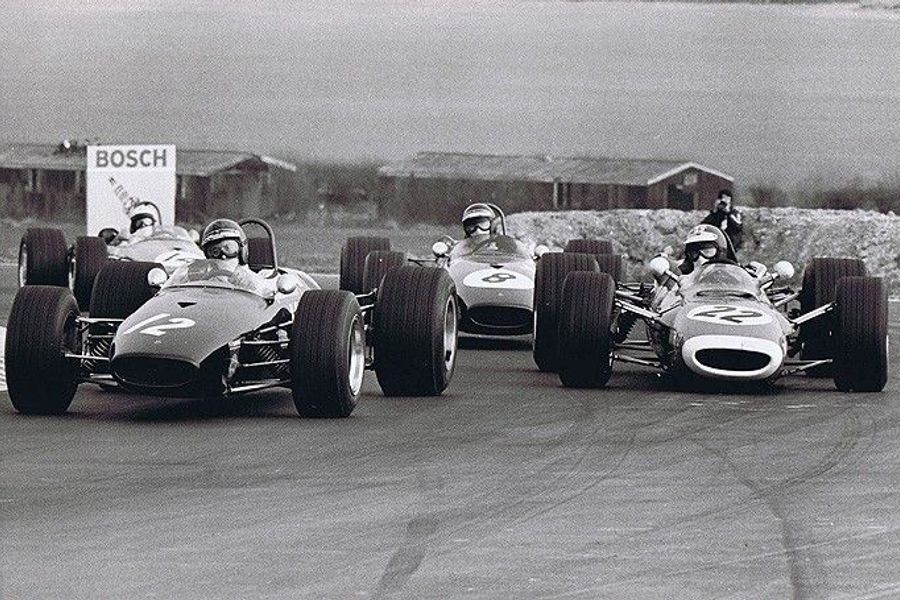 Picture: Piers Courage  heads a gaggle of cars at the chicane

Racing at Thruxton in 1968 started with a low-key ‘clubby’ meeting but it was the high-prolife second meeting of the season on Easter Monday that gathered national, and international attention. Feature race was International Formula 2 race for the Thruxton Trophy, and attracted a strong field with some of the big names of Formula 2 entered, many of who were also carving out Formula One careers.

The event consisted of two short heats over 15-laps, then a 54-lap final which would really test the runners on the new, and very quick, circuit, grid positions decided by finishing times from the heats. Pair of factory Matras were entered for Henry Pescarolo and Jean-Pierre Beltoise, while Winkleman Racing had two Brabham BT23Cs for Alan Rees and Jochen Rindt, with ‘works’ backing. The Brahmas, like the rest of the field, were powered by the ubiquitous 1600cc Bosworth FVA engine.

Other cars of note included the new Merlyn Mk12s making their race debut in the hands of Harry Stiller and John Caldwell, a Brabham entered by Frank Williams for Piers Courage, while Pter Gethin was out in the sole Chevron entered. Leading privateers featured names such as Jackie Oliver in a Lotus, and Derek Bell and Kurt Ahrens also in BT23Cs. An offial Gold Leaf Team Lotus entry was scratched before the meeting, and it had been hoped that a Ferrari might make the grid but that car never made it to Hampshire.

Chris Irwin in a Lola took an early lead in the opening heat, but clipped a kerb at the chicane and it was Oliver ahead of the field at the end of the opening lap. It was Pecarolo who was the form driver though, taking a lead and pulling clear of Alan Rees, the latter losing out to Oliver before the end.

With heat two being the quicker that put Rindt, Courage and Beltoise on the front row for the final, and on row two Bell, fourth in the second heat, and Pescarolo.

At the start it was Beltoise and challenging for th elad, Rindt only fourth, but past Bell for third by lap three. Courage dived past Beltouse ont he brakes int othe chicane to take th elad, only to lose out two laps later to Rindt.  Pescarolo had retired very early with a fuel leak after going off at Village, and at around half-way it was Rindt’s turn to hit trouble as he lost the Brabham under braking into the chicane, somehow managing to get the car back on the track, passing back thorugh a whiolehe had punched in an advertsing hoarding,  and with an exhaust now pointing in a slightly different direction to before.

Rindt stayed clear to take his first Formula 2 win of the season, and one he was to repeat at Thruxton the next two seasons - the Austrian dominant round the quick circuit.

Beltoise had closed to within there second of Rindt after his incident at the chicane, but had to settle for second ahead of Bell, who was complimented in the press for his drive. A spilt radiator saw Courage forced out of the podium battle, Oliver’s Lotus fourth.

Rindt was a dominate force in Formula 2 in 1968 with six wins, including four European Trophy races, though as a ‘graded’ driver he was not eligible for championship points, Beltoise and Pescarolo heading that series.