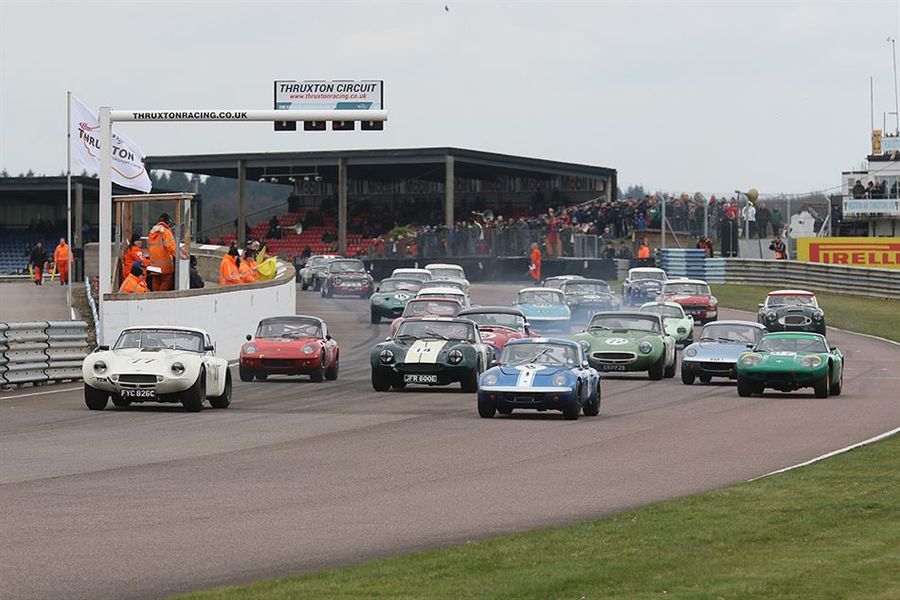 The Historic Sports Car Club will provide four of the grids for the 50th Anniversary Meeting at Thruxton over the weekend of 2nd/3rd June.
Double-header races for the Super Touring Car Trophy and the Historic Formula Ford Championship along with a 40-minute race for the Guards Trophy and a double-header non-championship period Formula Libre race for up to 2-litre single-seaters will give the weekend a strong flavour of the HSCC.
The fabulous Super Touring cars of the 1990s will return to the scene of some of the most spectacular races of the era for rounds three and four of the season. Meanwhile, a bumper grid of Formula Ford 1600s will deliver typical Thruxton slip-streaming action in the third event of their season. Thruxton has been providing epic Formula Ford racing since it opened in 1968 and the circuit’s first Formula Ford race was held on 19 May 1968 and won by the Merlyn Mk11 of Brian Sharp.
At 40 minutes, the Guards Trophy race will be one of the weekend’s longer races with mandatory pit-stops and optional driver changes. A fine grid of pre ‘66 GT cars and pre ‘69 sports-racing cars will make a tremendous sight around Thruxton’s fast sweeps and the sports-racing cars will by capped by the Chevron B8, which was making its debut just as Thruxton opened. In the GT ranks, TVR Griffiths take on AC Cobras and Jaguar E-types in what will be the third Guards Trophy race of the 2018 season.
Completing the quartet of HSCC grids will be a Formula Libre race for up to 2-litre single seaters of the 1970s and early 1980s from the HSCC’s Historic Formula 2, Historic Formula 3 and Historic Formula Ford 2000 championships. A varied grid of slicks and wings single-seaters is expected and to honour Thruxton’s rich Formula 2 heritage, the BARC will present its Jochen Rindt Trophy to the leading driver in a Formula 2 car.
The Jochen Rindt Trophy was commissioned by the BARC for the 1971 Easter Formula 2 race following the death of the Austrian racer at Monza in September 1970. He had won three European F2 races in a row at Thruxton from 1968 to 1970 and the memorial trophy was then presented annually to the winner of the Thruxton F2 race. The first winner, at Easter 1971, was Graham Hill and subsequent winners included Ronnie Peterson, Jacques Laffite and Bruno Giacomelli.
Grahame White, CEO of the HSCC, said: “We are very proud to be providing four grids for Thruxton’s 50th anniversary meeting and I’m sure that the HSCC races will add to a memorable weekend. Thruxton has a special place in the affections of many people, including me.”
Although an airfield-based circuit was used earlier in the 1960s, it was in March 1968 that the venue opened as a permanent track. The lay-out remains unchanged half a century later, making Thruxton one of the UK’s fastest tracks.
Alongside a high-profile programme of historic racing, the weekend will feature a number of demonstration sessions by a range of cars and motorbikes including the ex-Keke Rosberg Williams FW08C Grand Prix car.