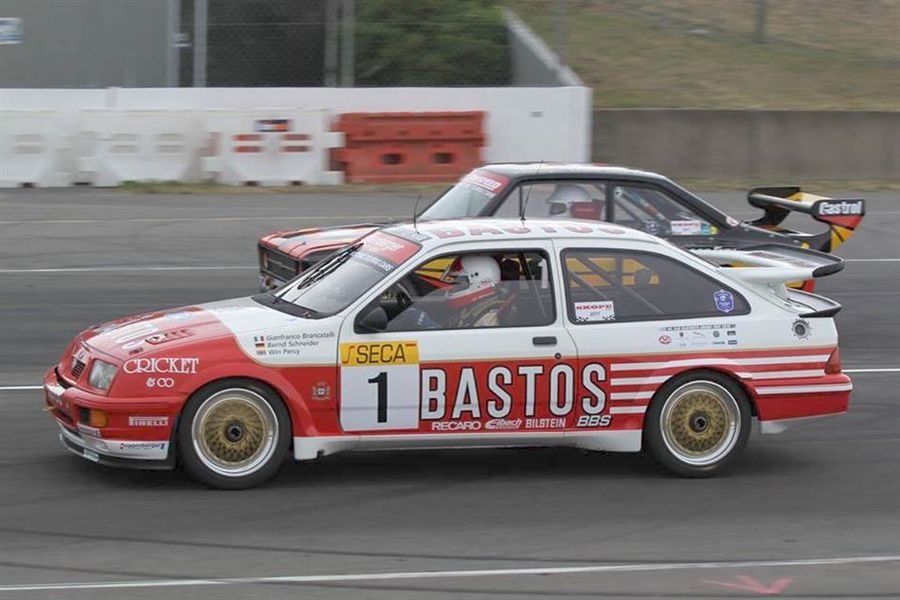 This summer’s Silverstone Classic (28th-30th of July) will celebrate the Ford Sierra RS500’s 30th birthday with two very special double-header races. For the first time ever both JET Super Touring Car Trophy showdowns taking place on the Saturday and Sunday afternoons of the Classic will feature not one, but two stellar grids racing simultaneously. The first will be filled with high-tech Super Tourers, the second with Group 1 and Group A racing saloons, including a large number of legendary RS500s.
The focus on the famed RS500 – the competition version of the original Sierra RS Cosworth – is highly significant, too, as the all-conquering turbocharged winged icon was first launched in July 1987 and thus is celebrating its 30th anniversary milestone at the Classic.
In total, the amazing and unprecedented line-up will feature more than 50-iconic entries spanning more than 25-years of glorious touring car racing history, all still displaying their evocative period liveries. There will be Group 1 Capris and Rover Vitesses from the late seventies and early eighties, Group A favourites such as the mighty RS500 and impressively rapid BMW M3s from the late eighties plus, of course, the more extreme Super Tourers from the nineties.
After what promises to be a hectic joint qualifying session on Friday, the field then will be split into two individual grids for the weekend’s pair of stand-out races. The more modern Super Tourers will line up in front and take the first rolling start. Then, 30-seconds later, the combined Group 1 and Group A grid will flash across the line thus providing spectators with two spectacular showdowns running in parallel on the full Silverstone Grand Prix circuit.
“It’s going to be very special and, with so much wonderful tin-top history on track, an amazing experience that no touring car enthusiast would dream of missing,” enthused Nick Wigley, CEO of event organiser, Goose Live Events. “The exciting Super Tourers have always been a big hit with the fans ever since the very first David Leslie Memorial Trophy race at the Classic back in 2009. Now we are doubling the eye-catching entertainment with what’s effectively a second stunning race running at the very same time – even more so, as this ‘second race’ will put the spotlight on the incredible achievements of the rightly idolised RS500.”
Introduced by Ford to put some much-needed sparkle into its humdrum showroom Sierra, the three-door RS500 is rated by many to be the world’s most successful competition car of all times. With its signature whale-tail rear spoiler and Cosworth inspired 500+ bhp engine, in its era the seminal Sierra was virtually unbeatable totally dominating Group A touring car championships right around the globe.
Perhaps its greatest triumph came at the Spa 24 Hours in 1989 when Gianfranco Brancatelli, Win Percy and Bernd Schneider took top honours in their Eggenberger Motorsport entered RS500. Today that victorious Bastos liveried car resides in New Zealand but it will be coming to Silverstone for a very special reunion at the Classic. Once again, multiple touring car champion Brancatelli will be back behind the wheel and team principal Rudi Eggenberger will be back on the pit wall.
Welsh racer Karl Jones is another reliving his RS500 glory days at Silverstone this summer. Back in the late eighties, he raced a Duckhams branded Sierra in the BTCC, scoring several podium finishes. Come July, Jones will be sharing a drive with Paul Linfoot in the striking Lui liveried RS500, formerly raced successfully in the 1988 German DTM championship by twice Le Mans winner Manuel Reuter.
As befits a 30th birthday party, Brancatelli and Jones will be joined by a number of other notable RS500 revellers. Those already confirmed include Andrew Kirkley in his ex-Laurence Bristow CAM Shipping liveried Sierra, Mark Wright’s iconic Texaco liveried machine plus the yellow Dunlop RS500 as raced in the Japanese Touring Car Championship. More ‘Cossie’ entries are expected, too.
Not only will visitors to the Silverstone Classic witness all these fabulous RS500s in dramatic flame-spitting action out on track but also, thanks to the event’s acclaimed ‘access all areas’ tickets, they will be able to observe the incredible cars close up in the paddock and even meet their renowned drivers.

Godzilla Returns for the Silverstone Classic!