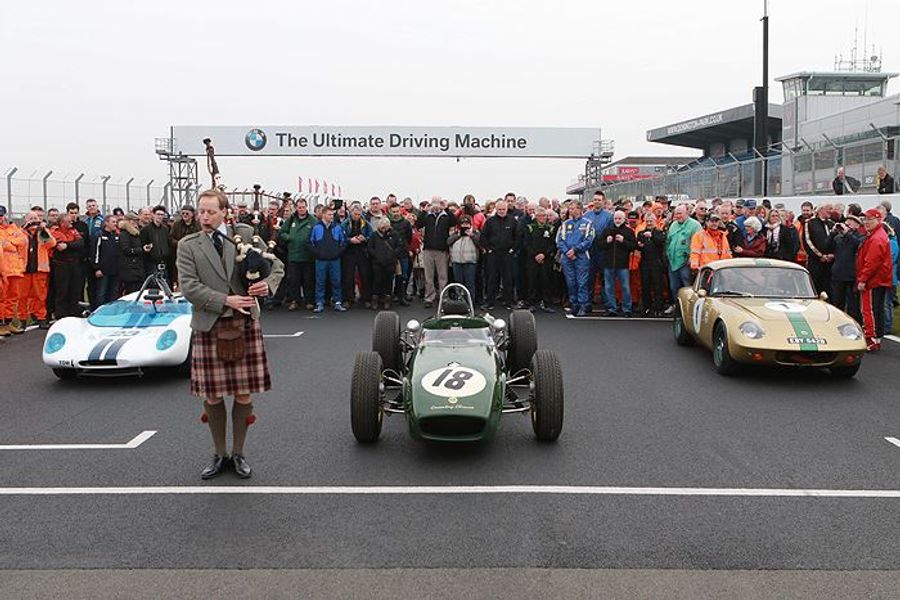 The life and racing success of Jim Clark was remembered by the Historic Sports Car Club during a moving commemoration at Donington Park on Saturday April 7th when around 500 people gathered on the start line.

The HSCC’s opening race meeting of the season was exactly 50 years from the day when Clark was killed in a Formula 2 accident at Hockenheim. The Club held a minute’s silence at 1pm on Saturday and drivers, team members, marshals, officials and spectators went to the grid to show their respect for one of Britain’s greatest racing drivers.

At the head of the grid was the Lotus 18 Grand Prix car now owned by John Chisholm. Chassis 378 is an ex-works car and was used by Clark to score his first major single-seater win at Brands Hatch in the summer of 1960.

Sam Wilson prepares and races the famous car and delivered it to Donington for the occasion. “It was lovely to see the Lotus 18 there with the other cars and it was fantastic to see so many people there to remember Jim Clark,” said Wilson. “In my opinion he was the best racing driver of all time.”

Joining the Grand Prix car was the Lotus 23B sports-racer of Darren Wilson and the Elan 26R of John Davison, representing two other types of car raced by Clark. The moving sound of bag pipes being played by Angus MacCurrach was the lead in to the minute’s silence for a Scottish sporting legend. For a minute, Donington Park fell completely silent as a remarkable racing driver was remembered in a poignant commemoration.