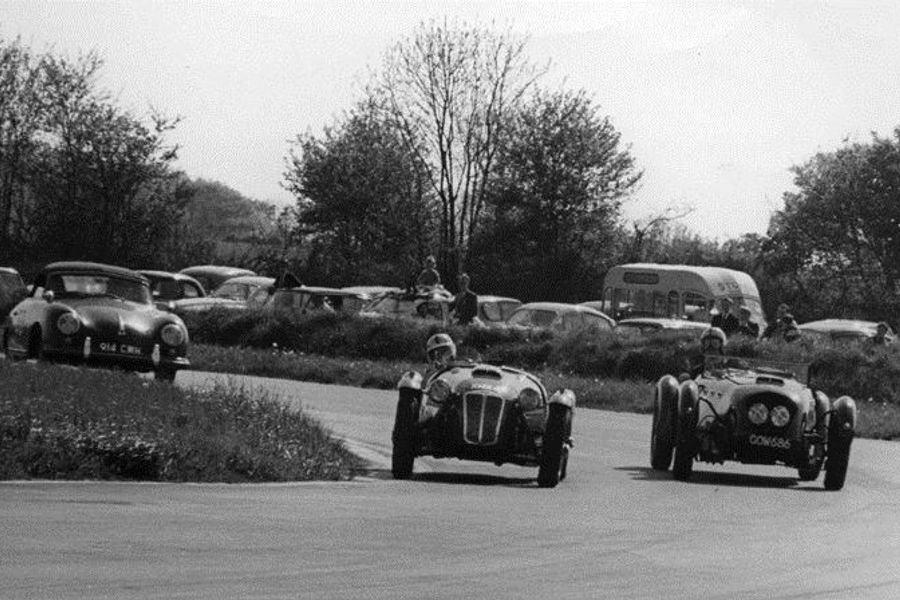 A race grid from 1966 will be re-created at Castle Combe over the weekend of 16/17 April to mark the 50th anniversary of the Historic Sports Car Club. During a full weekend of HSCC racing at the Wiltshire track the grid from the first Griffiths Formula race for sports cars from 1945 to 1955 will be reformed using as many of the original cars as possible. Sixteen cars are scheduled to attend and 11 of them are the originals from 50 years ago. For those that are not available, a car of the same make and model will feature. At Castle Combe on 14 May 1966 renowned historic racer Neil Corner won the inaugural Griffiths Formula race in his Jaguar D-type from the Lotus Mk10 of Chris Warwick-Drake and the Aston Martin DB3S of John Le Sage finished third. In total 25 cars entered the race but there were some non-starters and 14 cars finished the race. Once the 50th anniversary grid has been formed at lunchtime on both Saturday and Sunday members of the public will be invited to take part in a grid walk, which will allow everyone to get close to these fantastic cars and chat with the drivers. Later, the grid will be cleared and the cars will complete a parade lap of the track. When not on-track, the 50th anniversary cars will be on display in a marquee close to the assembly area in the paddock and as many as eight drivers from the 1966 race are expected to attend. HSCC 50th anniversary grid re-creation
No / Car / 1966 driver / 2016 drive-owner
2        Jaguar D-type / Peter Skidmore / Gary Pearson6        HWM Jaguar* / AM Greig / Jim Cochrane8        Lotus Bristol MkX  / Chris Warwick Drake / Malcolm Paul9        Frazer Nash / Martin Morris / David Morris10      Frazer Nash*/ Stephen Curtis / Chris Phillips11      Frazer Nash / Chris Drewett / Robert Mansfield16      Frazer Nash / Betty Haig / Brian Classik19      Allard J2X / Fred Damodaran / Massimo Battati22      Ferrari 166 Mille Miglia / Bernard Worth / Bernard Worth 23      Aston Martin DB2* / Mike Ward  / Chris Jolly28      Healey Silverstone  / Brian Dermott / Eric Hall29      Austin Healey 100S* / R Welling / Richard Plant33      Porsche 1500* / Geoff Thomas / Robert Barrie39      HRG 1500 / Ivan Sharrock  / Ivan Sharrock 41      HRG 1500 / Ian Dussek / Ian Dussek 42      Jowett Jupiter / Frank Mockridge / Patrick HelloCars marked with an asterisk (*) are not the original cars from the 1966 race, but examples of the same make and model. “The response to re-creating the first grid has been tremendous and it was great to discover that three of the cars are still in the same ownership. They should all be with us at Castle Combe,” said HSCC Chief Executive Officer Grahame White. “This will be the perfect way to start our 50th anniversary racing season.”