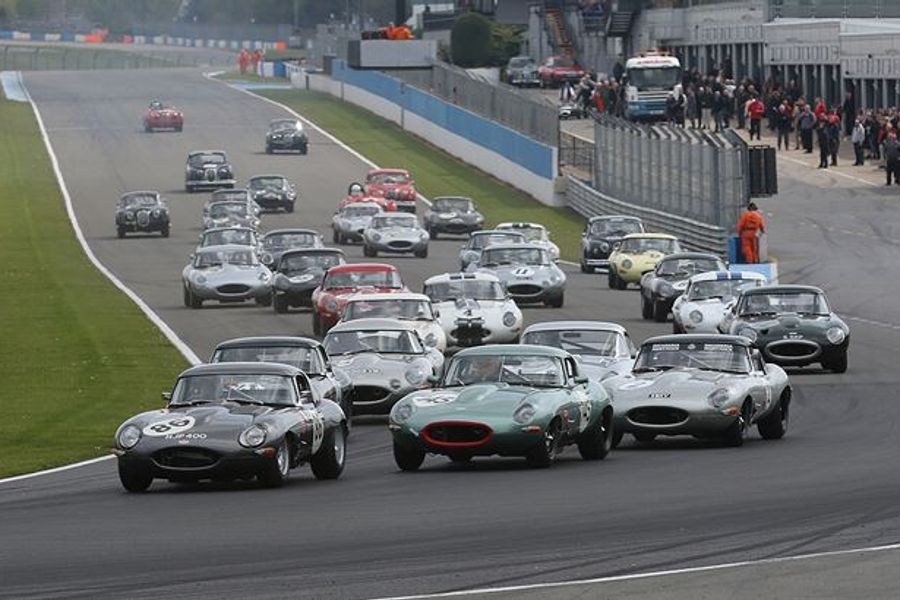 Double victories for James Dodd and John Sykes capped the HSCC race action during the seventh Donington Historic Festival (28th-30th April). Across a very full three-day programme, the Historic Sports Car Club was responsible for organising the racing element of the high-profile event. Despite the full schedule of 19-races, the event ran superbly to time and HSCC Chief Executive Officer Grahame White paid tribute to the work of the volunteer marshals in making the event run so smoothly.
Wins for Frazer Gibney and Richard Evans capped the opening event in the HSCC Historic Formula 2 FIA-sanctioned International Series, while father and son Olly and Grahame Bryant won the two-hour GT and Sports Car Cup race in their mighty AC Cobra.
On Sunday, a 40-minute race got the 2017 Jaguar Classic Challenge off to a flying start with a packed grid of pre-1966 Jaguars including a huge array of E-types. Marque expert Gary Pearson was the class of the field but Ben Short gave strong chase despite his lesser experience, while father and son Graeme and James Dodd completed the podium. Ben Eastick’s glorious D-type was the leading non E-type in a class-winning 12th place overall.
Four races for Formula Juniors got the FJHRA/HSCC Silverline Formula Junior UK Championship off to a fine start with an entry of almost 60 cars. The two front-engined races were real crowd pleasers as John Sykes gave his rare Merlyn Mk2 a pair of wins against a fierce challenge from the Lola Mk2s of Robin Longdon and Justin Fleming.
In the first front-engined race Sykes battled ahead after a slow getaway but was under considerable pressure when Longdon’s Lola suffered a broken diff on the exit of the chicane. However, Sykes could not relax as Fleming was still a threat on the run to the flag. “I had a chronic start and didn’t expect to beat Robin. I’m sorry that he fell back,” said Sykes.
The second race, on Sunday morning, was even better as the three-way battle raged all the way to the flag. Over the line, Sykes was ahead but only three-quarters of a second split three cars as Longdon took second from Fleming. “That was proper Formula Junior racing,” said Sykes.
The rear-engined Formula Juniors raced just as hard although no one quite had an answer to the pace of James Murray’s Lola Mk5 in the first race. Teenager Benn Tilley made an impressive Junior debut with a strong second in Paul Smeeth’s Lotus 22 and gave chase to Murray as he pulled clear of the rest of an early battle for second.
To bring the curtain down on the race weekend, the second rear-engined Formula Junior race ran at the end of Sunday afternoon and rising talent Tilley was on course for a spectacular win until an oil seal failed and put him out. While Murray recovered from a spin, John Fyda nipped ahead to take victory in his Brabham BT6.
The HSCC Super Touring Challenge opened with a pair of races and it was James Dodd at the head of the action as he returned to racing after two very limited seasons in 2015 and 2016. Dodd’s Honda Accord was the clear pacesetter in both races as he opened his title bid with a dominant double win.
While Dodd swept away into a commanding lead, Neil Smith (Alfa Romeo 156) and Chris Beighton (Honda Accord) battled furiously for second in the opener. On Sunday, both Smith and Beighton hit trouble and so Graeme Dodd moved through in his Honda to make it a family one-two.
“We’d like to record our appreciation of the volunteer marshals and officials,” said Grahame White. “It was a very full programme and their support, dedication and professionalism ensured that the whole weekend ran very smoothly.”