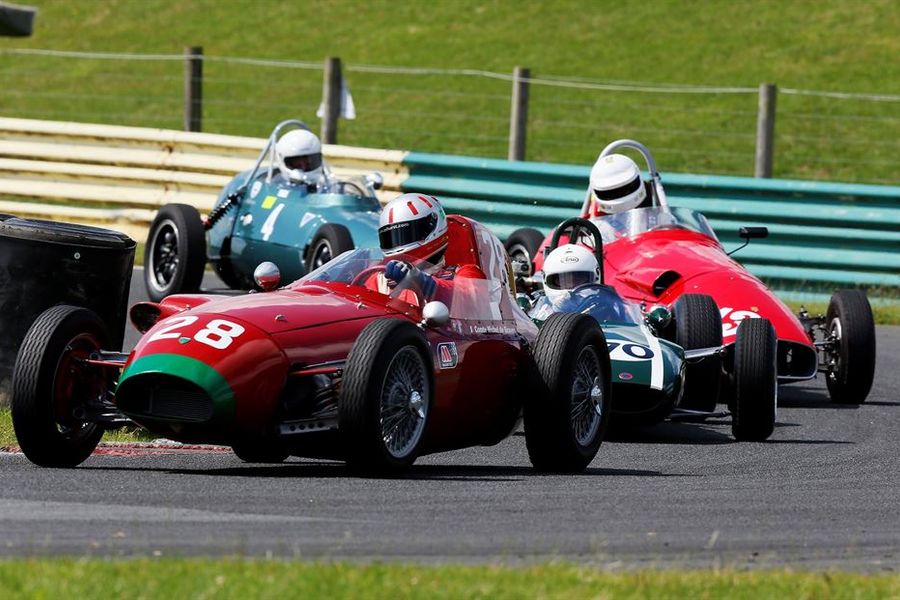 A bumper entry of more than 220-racing machines from sportscars and historic tourers to spectacular single seaters is set to feature at Croft Nostalgia Festival around the North-East's premier circuit this weekend (5th-6th August), with Le Mans winner and former Formula 1 star Richard Attwood joining the fold.
Attwood, part of the pairing that gave Porsche their first outright Le Mans 24-Hour win  in 1970 and veteran of seventeen Grands Prix with names as legendary as Lotus, Cooper and BRM, is to compete in his Porsche 928 – an model celebrating its 40th anniversary year. Alongside Attwood will be a stream of competitors in the hotly-contested Road Sports class and over the course of the weekend they'll be joined by a host of others competing in a dozen classes.
Among these will be the likes of the Historic Formula 3, Historic Touring Cars, Historic Formula Ford, Classic Clubmans, Midgets & Sprites, Historic Formula Junior and the ever-popular Guards Trophy in addition to the 70's Road Sports – all brought to you by the Historic Sports Car Club.
Some of these classes run full to the brim, taking in more than 40-entries, with a gaggle of local drivers thrown into the mix for good measure who will be counting on home support from the banks from the thousands of fans set to pay a visit to the famous North Yorkshire venue over the course of the festival weekend. Be sure to pick up your event programme so you can marry names to machines amidst the racing action.
Heading into its eighth year, the 2017 Croft Nostalgia Festival is set to be the biggest yet, ensuring a jam-packed bill of action from lights out in the opening race of the weekend to the chequered flag at the last.
Fearsome Ford Mustangs – the poster-boy of a generation of American muscle cars, will be up against nimble Brits in the form of Morris Mini Coopers and Hillman Imps in the Historic Touring Cars category. A battle of manoeuvrability and guile against power and brawn, and one that is always fascinating to see pan out. The nippy Minis and Imps will be complemented by the Spridgets – a category comprised entirely of Sprites and Midgets, which always prove quite the spectacle.
Such renowned marques as Lotus, March, Brabham and Lola will compete for Historic Formula 3 with Classic Racing Cars honours, joined by Reynard, Crossle and Van Diemen in the Formula Ford 2000s, as the historic single seaters make their mark on the billing. Then, not forgetting, Lancias and Lotuses, Triumphs and TVRs, a plethora of Porsches from the iconic 911 to Attwood's 928. It's a mouth-watering collection of classics and they're raring to renew old battles at Croft this weekend.
"You take one look at the entry list for Croft Nostalgia Festival this year and you're champing at the bit for the lights to go out in race one and for it all to get underway," enthused Circuit Manager Cat Lund. "We'll have some of the most evocative cars around, ones many of us will have grown up lusting after, on track once again and competing just as hard as they would have done back in their heyday.
"It's a great prospect and as classic motor racing goes, we're proud to be one of the highlights of the calendar with the Historic Sports Car Club coming to town in a big way with a packed timetable. The fact we've a former Le Mans winner and Formula 1 driver in Richard Attwood joining the field goes to show the level of competition out there – it's serious business."
This weekend will mark the eighth edition of the family-friendly Nostalgia Festival, which has established itself as a permanent fixture on the north-east’s annual social calendar. Blending retro racing, military magic, classic cars, vintage fashion and period entertainment, it is a 1940s-70s spectacular in every sense of the word.
Tickets for the weekend are available on the gate from just £14 for Saturday, 5 August and £20 for Sunday, 6 August – or just £28 for the weekend. Accompanied children aged 15 and under will be admitted free of charge.