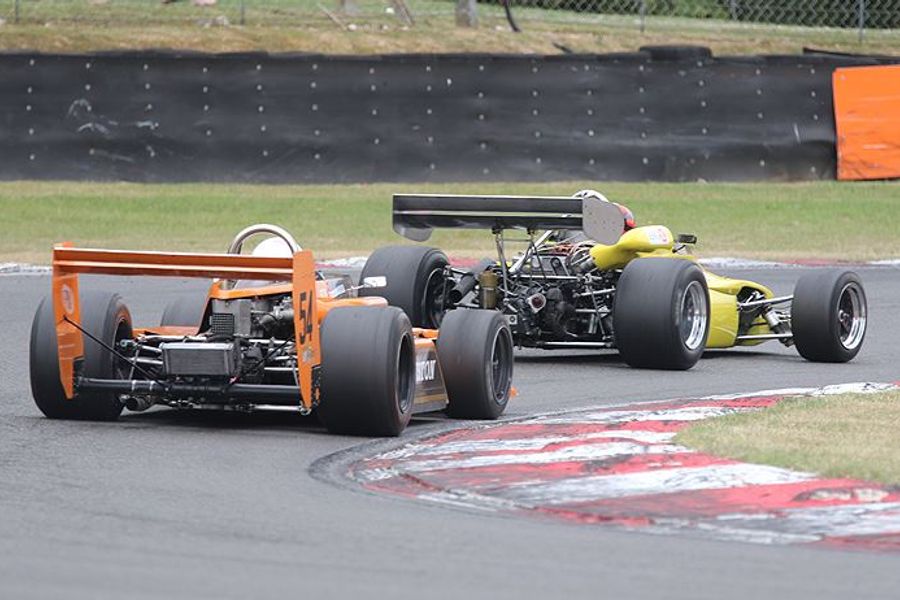 The Historic Sports Car Club’s 50th anniversary race meeting at Brands Hatch (1st to the 3rd of July) will be a major highlight of the club’s celebration season.
With a total entry of 475 cars for 23 races across the specially extended three-day event, The ‘Legends of Brands Hatch Super Prix’ meeting is believed to be the biggest in the club’s 50-year history. John Le Sage, one of the competitors in the inaugural Griffiths Formula race in 1966, will be the club’s guest of honour for the weekend.
The HSCC Super Touring Trophy entry is excellent and four cars from New Zealand will boost the grid to 25 cars, including the ex-Paul Radisich 1994 World Cup-winning Ford Mondeo, now owned and raced by Scott O’Donnell, and the BMW 318 first raced by Tim Harvey in 1992 and now raced by Warren Good. Regular front-runners include the Honda Accords of Stewart Whyte and James Dodd, while single-seater and GT ace Michael Lyons joins the grid in a Volvo S40.
Other highlights of the weekend will include more than 100 Formula Juniors competing in three races as part of the formula’s Diamond Jubilee World Tour. A fabulous 37-car front-engined grid will be headed by Mark Woodhouse (Elva), Stuart Roach (Alexis), Mike Walker (Bond), Ray Mallock (U2) and Andrew Tart (Bond), while Roach is also a leading contender in the drum-braked race in the Condor SIII.
The rear-engined disc-braked Junior grid is spectacularly competitive and has at least 10 potential winners. Westie Mitchell (De Tomaso), Callum Grant (Merlyn Mk5/7), Sam Wilson (Lotus 20/22) and Andrew Hibberd (Lotus 22) are some of the likely pacesetters.
Another superb single-seater entry has been gathered for the Classic Formula 3 Championship where the 37-car field includes a strong contingent from France. Period F3 racers Ian Flux (March 783) and Richard Trott (Chevron B43) are joined by defending champion Max Bartell (Chevron B34) and category newcomer Cameron Jackson (March 813). The Historic Formula 3 Championship double-header also has a superb entry with a gaggle of European visitors joining British front-runners Jon Milicevic (Brabham BT21), Simon Armer (March 703) and Peter Thompson (Brabham BT21.
More weekend highlights include races for Historic Formula 2, the Pre ’80 Endurance Series, Pre ’66 Grand Prix Cars from the HGPCA, the Historic Race of Champions for the Derek Bell Trophy single-seaters and a race for the GT and Sports Car Cup.
The HSCC Historic Formula 2 FIA International Series, supported by Berazzi Wheels, should be headed by Richard Evans (Chevron B42) but Dean Forward (March 782) is rapidly getting to grips with F2 power. Leo Voyazides and Simon Hadfield top the Pre ’80 entry in their stunning Cosworth DFV-powered Lola T282.
Both HSCC Road Sports categories will be in action, with the 70s field starting the weekend’s racing and a 30-car Historic Road Sports field racing on Sunday afternoon. Meanwhile, a bumper Guards Trophy field will bring the curtain down on nine hours of racing on Saturday.
Several classes will have their qualifying session and race on Sunday, including Historic Touring Cars, Historic Formula Ford 1600 and the combined Classic FF2000/Historic FF2000/Classic Racing Cars contest. The capacity Formula Ford 1600 grid will wrap up the weekend’s racing in style as driver like Benn Simms, Rob Wainwright, Callum Grant and Benn Tilley continue their incredibly tough but sporting battles at the head of the field.
On Friday, a full day of practice and qualifying starts at 9am.
On Saturday, the first of 13 races starts at 9am.
On Sunday, qualifying starts at 10am with the first of 10 races at 11.45am.
Brands Hatch The Historic Sports Car Club