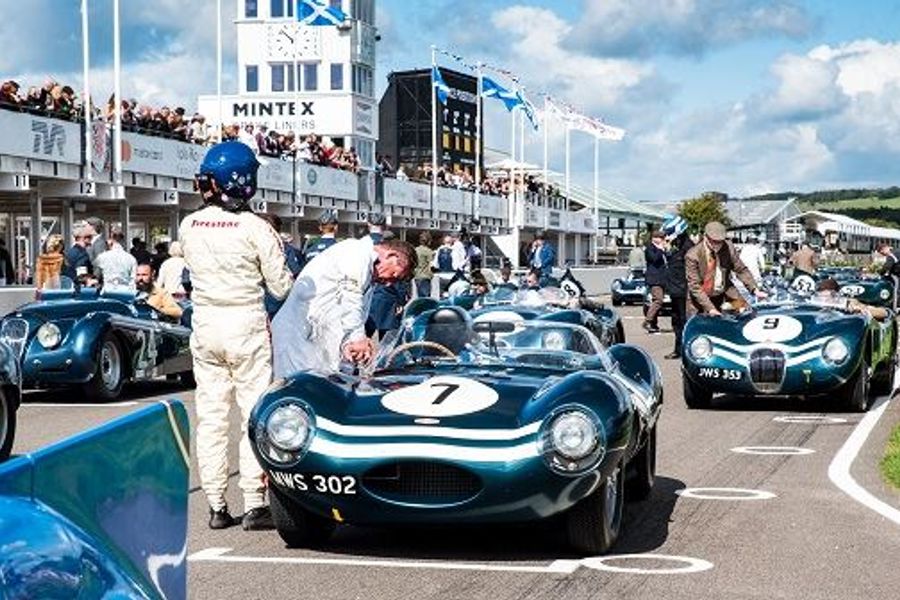 From September 7th to the 9th, Goodwood will celebrate the 20th anniversary of the Revival. The hallowed Motor Circuit will once again come alive to the sights and sounds of the 1940s, '50s and '60s. Visitors will enjoy world-class historic racing, stunning air displays, music, dancing, vintage fashion shows, and a nostalgic fun-fair.

The Goodwood Motor Circuit was originally established by the 9th Duke of Richmond, known as Freddie March, at the end of the Second World War. Freddie was passionate about racing and was persuaded by his friend, and RAF hero, Tony Gaze that the perimeter road of RAF Westhampnett would made a thrilling race track.

The circuit opened in September 1948 to host Britain's first post-war motor race meeting at a permanent venue. Goodwood became the spiritual home of British motor racing, staging headline races such as the Tourist Trophy for sports cars and the Glover Trophy for Grand Prix cars. All the top drivers of the day raced at Goodwood, from Juan Manuel Fangio and Stirling Moss in the 1950s, to Jim Clark and Graham Hill through the 1960s. The circuit held its last race meeting in the summer of 1966, when the Duke of Richmond feared that the current crop of cars were becoming too fast for the Sussex-based circuit.

On 18 September 1998, 50 years to the day since the circuit first opened, the current Duke of Richmond, (Freddie March’s Grandson, known then as Lord March), brought motor racing back to Goodwood with the very first Goodwood Revival meeting and it has been a phenomenal success from day one. The circuit had been painstakingly restored to look as it did in its heyday while complying to modern safety standards.

The Revival has since become one of the biggest annual historic motorsport events in the world and the only one to be staged entirely in period dress. Each year over 150,000 people descend on this quiet corner of West Sussex to enjoy the three-day event.

On track this year there will be 15-races over the weekend, with historically significant cars and motorcycles all pre-dating the circuit closure in 1966. Highlights include the Kinrara Trophy, which will see many millions of pounds worth of cars race into dusk on Friday night, with Ferrari 250 GT SWBs on the grid, alongside Jaguar E-types, Aston Martin DB4 GTs, among many other priceless classics. The Kinrara is arguably now the most expensive historic grid in the world.

The Barry Sheene Memorial Trophy will see two races, one on Saturday and one on Sunday. Motorcycle legends will climb aboard machines that raced before 1959, the highlight being the Le Mans-style start that sees riders sprint across the grid to their motorcycles.

The headline race takes place on Sunday with the Royal Automobile Club TT Celebration. It has been a staple in the Revival race schedule since 1998 with a grid packed full of 1960s AC Cobras, Chevrolet Corvettes, Jaguar E-Types and much more.

Racing at Revival are some of the best-known competitors and champions from the world of motorsport. Le Mans winners Emanuele Pirro, Richard Attwood and Derek Bell, Formula 1 stars Karun Chandhok and Jochen Mass, BTCC drivers Matt Neal, Andrew Jordan, Jason Plato, Tim Harvey, and Tiff Needell plus bikers John McGuiness, Freddie Spencer, Steve Parrish and James Haydon will battle it out on track to take the top step on the podium.

Away from the track there is even more to experience. The Freddie March Spirit of Aviation concours for pre-1966 aircraft will feature a celebration of the RAF’s centenary, with several scheduled flying displays. The Earls Court Motor Show presented by Sky Movies will have a special display of cars and bikes directly connected to the Hollywood silver screen legend Steve McQueen and over on the Revival High Street visitors can explore the best in period fashion, shopping and enjoy an all-singing, all-dancing fashion show.

Over the Road will host a traditional funfair, literally across the bridge from the circuit, complete with an old-school big wheel, helter-skelter and carousel. Butlin’s will be rolling back the years for their seventh year, offering free roller-skating to visitors in the Butlin’s Ballroom, styled exactly as it would have been in a 1950s Butlin’s Resort. Redcoats will entertain the children as well, encouraging games such as ‘limbo’, ‘follow the leader’ and ‘stuck in the mud’.

The Revival Cinema will once again be presented by Sky Cinema, featuring family films throughout the weekend. Adjacent to this will be the Bonhams historic vehicle auction and the Smith & Williamson Classic Car Show, where visitors can become part of the event, bringing their own classic cars for display.

The Duke of Richmond said, "It is incredible to think we are going to be celebrating the 20th anniversary of the Revival this September. It was always my dream, as a boy, to see racing again at Goodwood so it gives me enormous pleasure to see the circuit back in action. This year is extra special because we’re also celebrating 20 years since we founded the Goodwood Road Racing Club and the Revival has always been home to our GRRC members.

“Highlights for me this year will be the Kinrara Trophy which will see us racing into the dusk again; we have over ten fantastic Ferrari 250 GT SWBs racing, not to mention GTOs, E-types (including one of only 8 E-types to have ever raced at Le Mans), narrow-bodied Cobras and even a Maserati 3500GT. Fashion will have a big year too this year with ‘High Flyers’ our new fashion show, which follows a jet-set racing driver dancing his way in style through the fashions of the Revival era. The parades will be great fun as well as we’re marking 70 years of British Railways along with 70 years of the Austin FX3 Taxi and all manner of planes and automobiles. We’re also honouring 60 years of the Hula Hoop. I really look forward to seeing you all there."

For the first time this year, Over the Road will be open on Thursday evening for further revelry for those with a general admission ticket to any day of the event weekend.

Fiat 500 Celebration at the Goodwood Revival