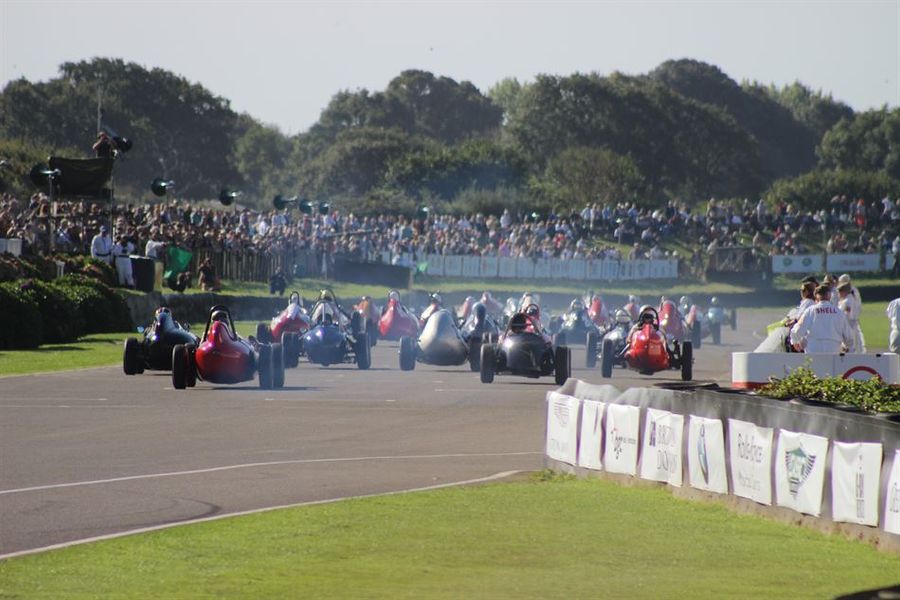 There are seven weeks to go before this year’s Goodwood Revival takes-off and Goodwood’s Motor Circuit is transformed once again into the evocative sell-out period event that welcomes thousands of visitors every year.
This year’s race schedule his now been confirmed and is as follows:
Friday 8th September
Kinrara Trophy (60 mins – two drivers)
After a scintillating debut at last year’s Revival, the Friday-evening race for closed-cockpit GT cars – of three litres and over – of a type that raced before 1963 will make for a very welcome curtain-raiser to the meeting. The sight of twirling wheels and glowing discs as a horde of throttle-balanced beauties battle into the dusk cannot be missed.
Saturday 9th September
Chichester Cup (20 mins)
There’s been a Chichester Cup race on the Revival programme every year bar one, for good reason: the rear-engined Formula Juniors with drum brakes, of a type that raced between 1958 and 1962 – period stepping-stone-to-stardom single-seaters – provide thrilling combat around the fast sweeps of the Motor Circuit, every single time.
Madgwick Cup (20 mins)
The baby sportscar race, for prototypes under three litres of a type that raced between 1955 and 1960, is no less exciting than its Whitsun Trophy big brother. A packed grid of Brabham, Crossle, Elva and Lotus machines creates real elbows-out needle on track, with the quickest cars trying everything to eke out an advantage in the 20-minute scrap.
Barry Sheene Memorial Trophy, Part 1 (25 mins – two riders)
The first of a pair of two-rider races for motorcycles of a type that raced between 1960 and 1966, whose indecent pace belies their age, takes place on Saturday. With a Le Mans-style start, in which riders run across the track to their waiting steeds, and a compulsory pitstop, the pro/am event is as frenetic as it is fabulous. And they go again on Sunday!
St Mary’s Trophy, Part 1 (25 mins)
Another double-header, with a pro/am driver line-up in saloon cars of a type that raced up to 1959, the St Mary’s Trophy is many visitors’ favourite event. Superstar touring car racers – retired and current – from across the globe go head to head on Saturday, desperate to give a good account of themselves before handing the baton to the cars’ owners for Sunday’s sequel.
Goodwood Trophy (20 mins)
The sweet smell of methanol and Castrol R pervades the paddock as the Grand Prix & Voiturette cars of a type that raced between 1930 and 1951 are warmed up ahead of the Goodwood Trophy, another Revival classic that pits exquisite Alfas, Bugattis, ERAs and Maseratis against each other. Marvel at the quickest cars being drifted beautifully on the throttle.
Whitsun Trophy (25 mins)
The big and brutal unlimited sports-prototypes of a type that raced up to 1966 contest the annual Whitsun Trophy, the fastest race of the Revival weekend. The raucous rumble from an unleashed pack of McLaren M1Bs, Lola T70 Mk3Bs and Spyders, Ford GT40s and Lotus 30s gets their intrepid pilots’ and racegoers’ attention in equal measure.
Freddie March Memorial Trophy (20 mins)
As the sun falls ever lower over the South Downs to bring Revival Saturday to a close, we’re treated to one last endurance-racing retrospective: the Freddie March Memorial Trophy for sports cars in the spirit of the Goodwood Nine Hour races 1952-’55. Evoking period memories, stunning Aston Martins, Ferraris, HWMs, Jaguars and Maseratis do battle once more.
Sunday 19th September
Brooklands Trophy (20 mins)
Kickstarting Sunday’s programme is the Brooklands Trophy for sports cars in the spirit of the great Brooklands endurance races prior to 1939. The race makes a welcome return to the programme after a year’s lay-off and features wonderful weapons that charged round the Surrey Speedbowl in its pomp.
Richmond Trophy (20 mins)
Priceless perfection comes in the shape of the Richmond Trophy for front-engined Grand Prix cars of a type that raced between 1952 and 1960. Many of the world’s most fabulous machines from arguably its most aesthetic era come out to play, including BRM, Ferrari, Maserati icons. They’re joined by front-running but less familiar cars from Ferguson and Scarab.
Barry Sheene Memorial Trophy Part 2 (25 mins – two riders)
Bike racing fans get a second instalment of two-wheeled combat on Sunday when the leather-clad legends take to the circuit for the deciding part of the aggregate event named after Britain’s great double World Champion Barry Sheene. Can Saturday’s stars hold on to their advantage, or will problems intervene for the Manx Norton and Matchless G50 pairings?
St Mary’s Trophy, Part 2 (25 mins)
The owners of the 1950s saloon cars pick up the pieces on Sunday after the pro racers’ shenanigans the day before. Many of them, regulars in the cars in historic events, are a match for their esteemed team-mates and the battles all the way down the field are no less fierce and it’s usually all to play for on aggregate.
Royal Automobile Club TT Celebration (60 mins – two drivers)
For many the largest and most shiny jewel in the Revival’s well-decorated crown, the Royal Automobile Club TT Celebration race for closed-cockpit GT cars in the spirit of the RAC TT races from 1960 to 1964 is an hour-long, two-driver pro/am feast, with no quarter given, certainly among the pros drafted in to share the precious metal up and down the grid.
Glover Trophy (20 mins)
The tiny, lowline, rear-engined machines that contest the Glover Trophy for 1.5-litre Grand Prix cars of a type that raced between 1961 and 1965 are in stark-contrast to the front-engined sit-up-and-beg racers that preceded them. The race is always fast and furious, with Lotus 25s usually showing rivals the way, just as in period.
Sussex Trophy (25 mins)
Now the traditional Revival curtain-closer, the Sussex Trophy for World Championship sportscars and production sports-racing cars of a type that raced between 1955 and 1960 produces a magical time-warp trip back to the discipline’s heyday when Jaguar D-types, Knobbly- and Costin-bodied Listers and Ferraris battled across the continent for top endurance-racing honours. It’s always a fabulous way to end.