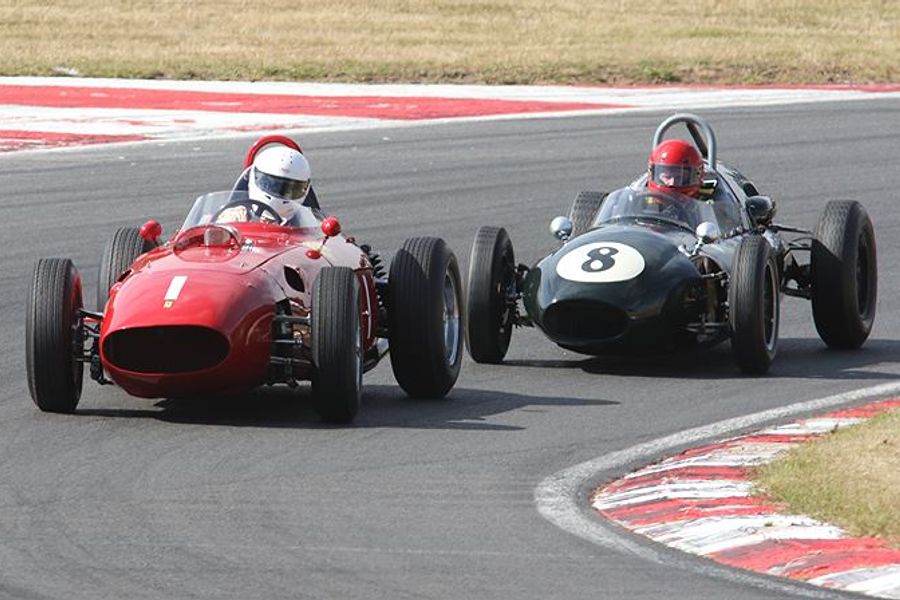 Another highlight in the Historic Sports Car Club’s 50th anniversary season will be the return of period Grand Prix cars to the Oulton Park Gold Cup (27th to the 29th of August).
The HSCC has confirmed that the Historic Grand Prix Cars Association will return to the Cheshire event to contest a pair of feature races for the Gold Cup, with a race on Sunday and a second race on Monday. Given the heritage of the race, it is very fitting that pre-1966 Grand Prix cars will be in action at this fantastic and historic venue. The Gold Cup will be awarded to the aggregate winner across the two races.
Soon after racing started at Oulton Park in August 1953, a non-championship Formula 1 race was organised. The August 1954 race was named the Oulton Park Gold Cup and it drew a fine entry, with Stirling Moss winning despite starting his Maserati 250F from the back of the grid. It was the first of five Gold Cup wins for Moss, who later made history by giving the innovative Ferguson P99 four-wheel drive F1 car it's only victory in the 1961 Gold Cup.
Through the 1960s, many of the finest drivers of the era graced the Cheshire track and the list of former Gold Cup winners is impressive. Jim Clark, Jack Brabham, John Surtees and Jackie Stewart all won the race and thrilled the big crowds that packed into the parkland track.
As has now become a tradition, the Bank Holiday weekend at the end of August is a focal point in the Oulton Park calendar as the famous Gold Cup race is celebrated and the 2016 edition promises to be one of the best yet. After testing and qualifying on Saturday, there will be up to 10 races on Sunday afternoon and then more qualifying on Monday morning before another 10 races on Sunday.
Alongside the stunning pre-1966 Grand Prix cars will be the final round of this year’s Jaguar Classic Challenge and a double-header for the HSCC Super Touring Trophy.
Many of the HSCC’s categories will be in action and there are double-headers for Formula Junior, Derek Bell Trophy/Classic Formula 3, Historic Touring Cars, Historic Formula F1600 and Historic Formula Ford 2000. Single races will be run for Historic Road Sports, 70s Road Sports, Classic Clubmans and Classic Racing Cars/URS Classic Formula Ford 2000.
As usual for Oulton Park, the Guards Trophy grid will be split across two races with the pre ’66 GT cars having their own 40-minute race away from the pace-setting pre ’69 sports-racing cars.
Historic Sports Car Club Oulton Park Gold Cup HSCC