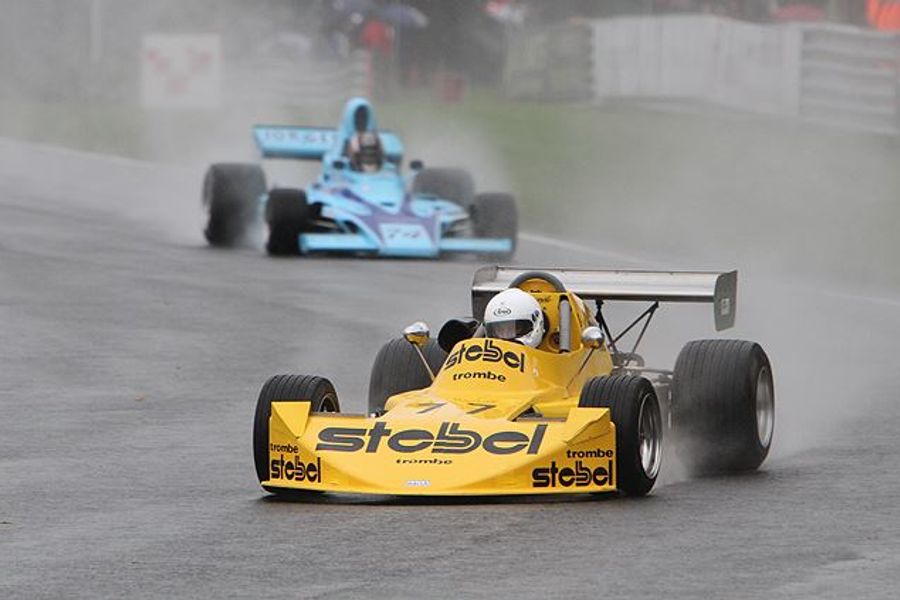 Just as in 2013, the Derek Bell Trophy provided two mighty races from a superb field that included 12 Formula 5000s. For the opening race, F2 racer Richard Evans (March 742) boldly gambled on slick racing tyres on a still wet track. Initially, Michael Lyons (Eagle FA74) romped away but as the track started to dry, Evans worked into contention and despite a massive effort by Lyons, was able to squeeze ahead late in the race after an absorbing contest. Later, on a fully wet track, Lyons narrowly turned the tables on Evans after a fabulous performance from both drivers.

In the Historic Formula Ford Championship, four drivers battled for the lead on a very slippery track and there was an historic victory for Michael Mallock in his rare front-engined Mallock Mk9. This was the first Formula Ford win for 43 years by a Mallock and the last winner, Michael’s uncle Richard, was on hand to see his old car win. Behind the Merlyns of John Murphy Callum Grant, Benn Simms secured his third HFF1600 title with fourth place.

Despite two separate tyre dramas, James Dodd was crowned Super Touring Champion after title rival Stewart Whyte spun out of the second race in his similar Honda Accord. Whyte beat John Cleland (Vauxhall Vectra) in the opening race and then Cleland mastered tough conditions on Monday to fend off the 4x4 Audi A4 of Paul Smith for victory.

Robert Oldershaw (Lola T212) and Tony Sinclair (Lola T292) shared the Martini Trophy wins, with Sinclair bringing the famous ex-Chris Craft car back to the track after a long absence. Young Sam Carrington-Yates starred in the second race by taking second in his father David’s Chevron B16.

Sunday’s races ran in dry conditions and included wins for Mark Woodhouse (Elva 100) and Jon Milicevic (Cooper T59) as they continued their battle for the Millers Oils Formula Junior Championship.

The Guards Trophy field was split across two 40-minute races on Sunday with Matt Nicoll-Jones heading a Jaguar E-type one-two in the GT section while there was a tremendous finish in the sports-racing contest as less than a second covered the top three Chevrons. Father and son pairing Hugh and Mark Colman took a slender victory.

Two races on a wet track for the ByBox Historic Touring Car Championship provided some glorious action and wins for Tim Davies (Lotus Cortina) and Peter Morgan (Mini Cooper S), with battles and sideways action all the way down the 30-car field.