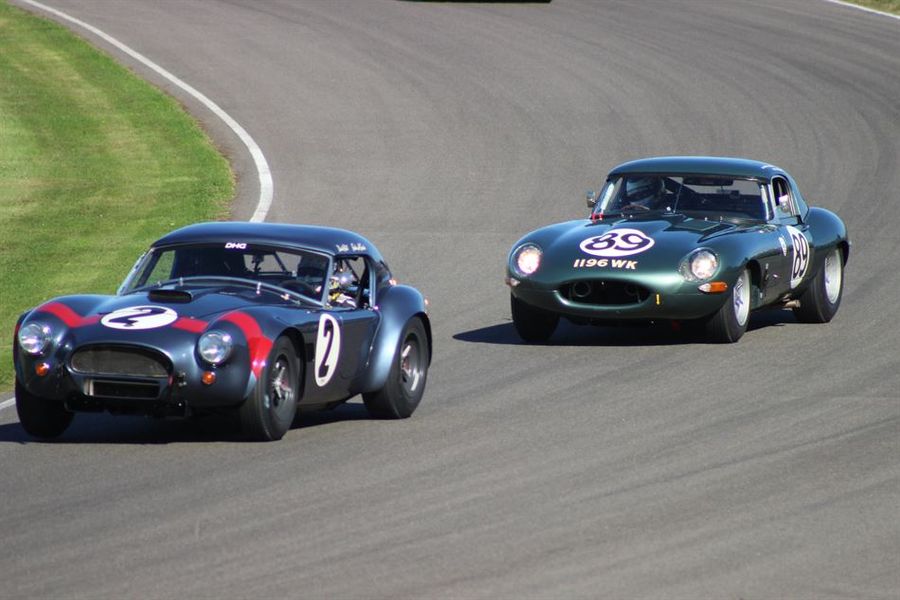 Sunday afternoon’s RAC TT Celebration, flagship race of the 2016 Goodwood Revival, proved well worthy of that label with an hour of exciting race action from the 1960s GTs. At the flag, it was last year’s victors, Chris Ward and reigning British Touring Car Champion Gordon Shedden in their Jaguar E-type who recorded a back-to-back wins after close race.
Goodwin had established a healthy lead during his initial stint but a safety car period brought the Dutch AC Cobra pairing of David Hart and Giedo van der Garde into contention and then, until a last minute incident, into the lead.
The Jaguar went into the lead at the start in spectacular fashion using the kerbs and even some of the grass to demoralise the rest of the field. As the lead stretched to over 10-seconds, it seemed as if he might be making Shedden’s task an easy one. With only a third of the race run he dived into the pits and the Scot jumped into the E-type. The picture, though, was about to change.
Jo Bamford (Ferrari 250 GTO/64) and Bill Shepherd (AC Cobra) made contact and went off in spectacular fashion and out came the safety car. When the race went green again van der Garde, who had taken over from Hart closed in Shedden and, as those who had not pitted prior to the safety car period pulled in to make their driver changes, their battle became one for the lead.
For a while Shedden seemed to have the answer for everything van der Garde tried but with 17 minutes left, he went deep into Woodcote, locked up and went wide. The Dutchman took advantage and swept into the lead. Shedder recovered and closed in on the Cobra before being temporarily held up by a backmarker. With gap first to second was now almost 1.5 seconds, once more Shedden was on a charge, and closed right up to the back of van der Garde’s Cobra. Then with hardly any time left to run the Jaguar gave the Cobra the slightest of nudges, van der Garde dramatically spinning off across the grass handing victory went to the E-type.
The ‘off’ was almost into the barriers but Giedo still managed to recover, finishing fourth behind the close battle that had been going on for third and, now second, between another couple of AC Cobras, driven by, respectively, Michael Squire/Frank Stippler and Oliver Bryant/Andrew Smith.
RAC TT Celebration Race Result:
1 Chris Ward/Gordon Shedden (Jaguar E-Type) 41 Laps in 1h03m14.536s
2 Michael Squire/Frank Stippler (AC Cobra) +13.943s
3 Andrew Smith/Oliver Bryant (AC Cobra) +14.241s
4 David Hart/Guido van der Garde (AC CObra) +20.865s
5 Gary Pearson/Chris Harris (Jaguar E-Type) +1m14.596s
6 John Young/Jackie Oliver (Jaguar E-Type) +1 Lap
7 Matt Neal/Chris Beighton (Sunbeam Lister Tiger) +1 Lap
8 Joaquin Folch-Rusinol/Ben Mitchell (Jaguar E-Type) +1 Lap
9 Rob Huff/Richard Meins (Jaguar E-Type FHC) +1 Lap
10 Wolfgang Friedrichs/Simon Hadfield (Aston Martin Project 212) +1 Lap
Fastest Lap: Hart/van der Garde 1m26.094s (100.35mph)
Chris Ward Gordon Shedden Jaguar E-type 2016 Goodwood Revival 1960s GTs RAC TT Celebration