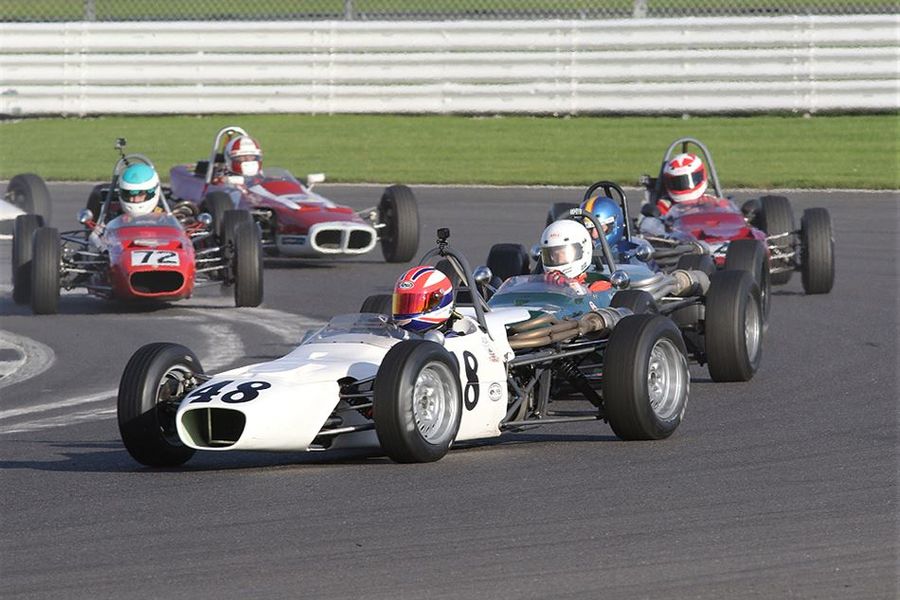 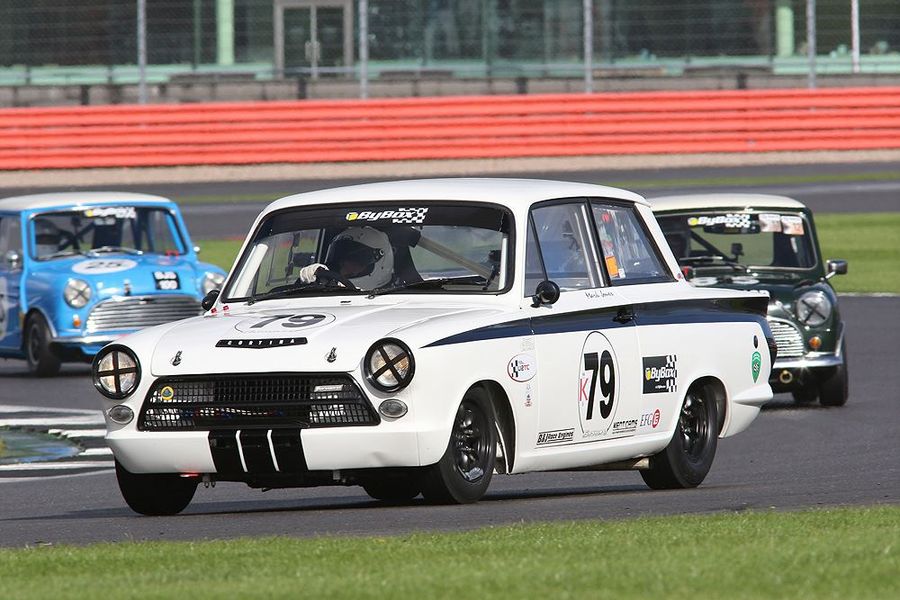 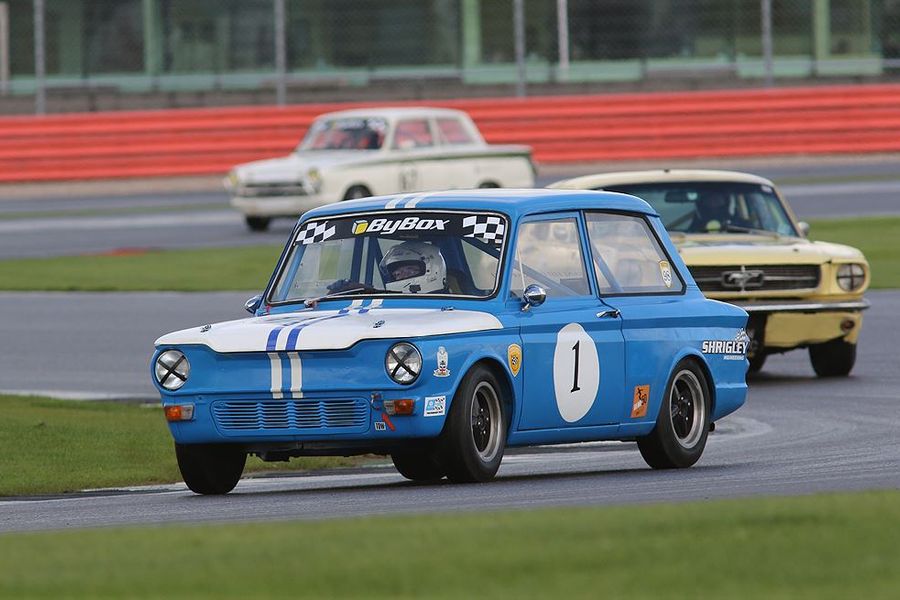 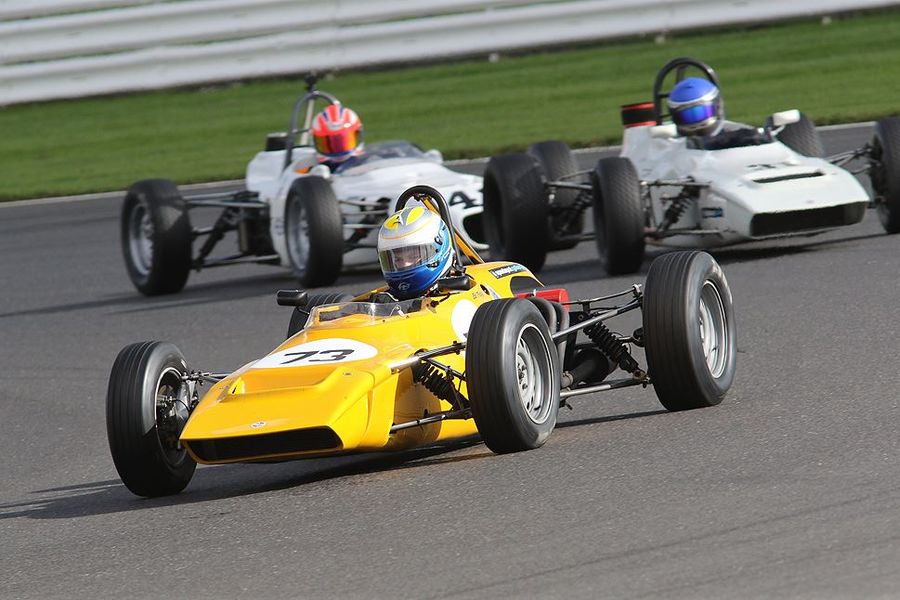 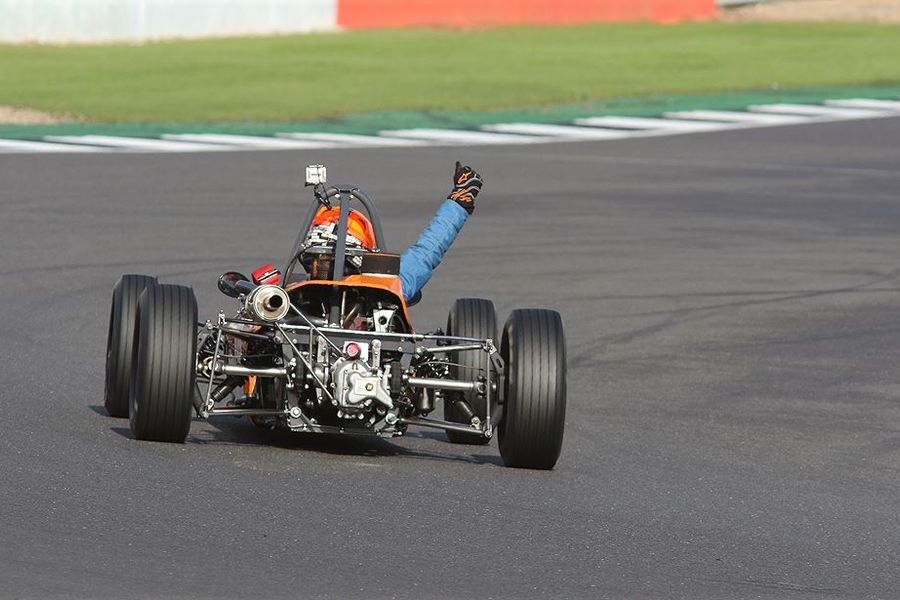 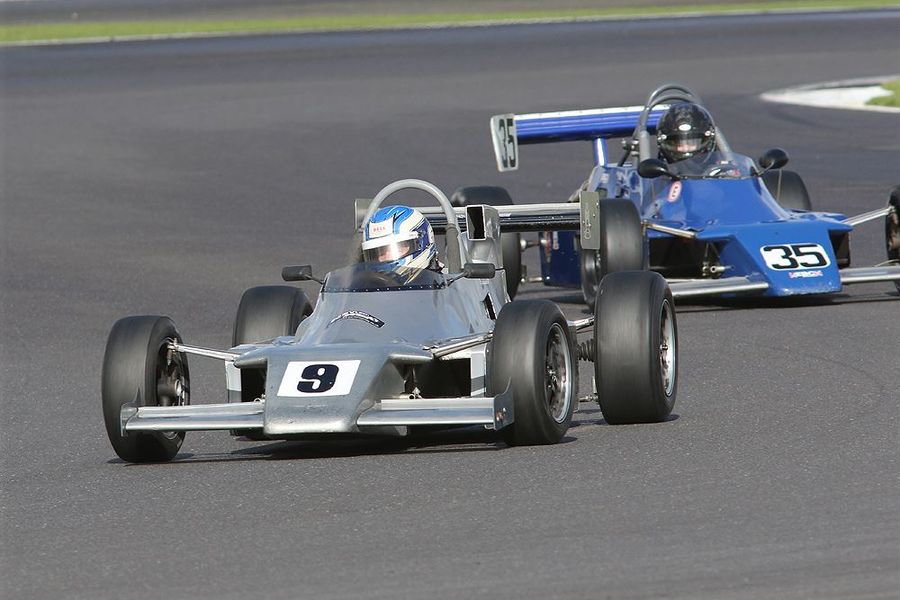 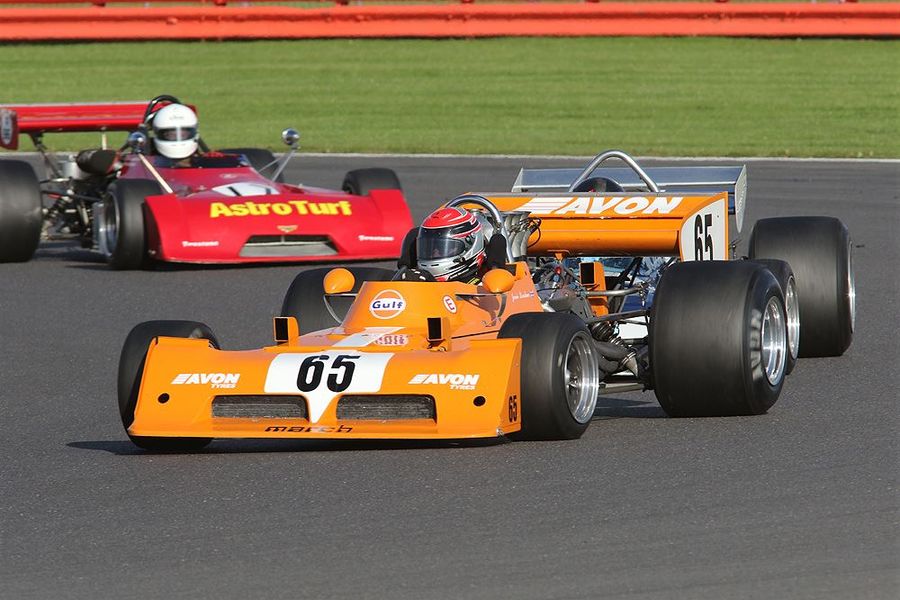 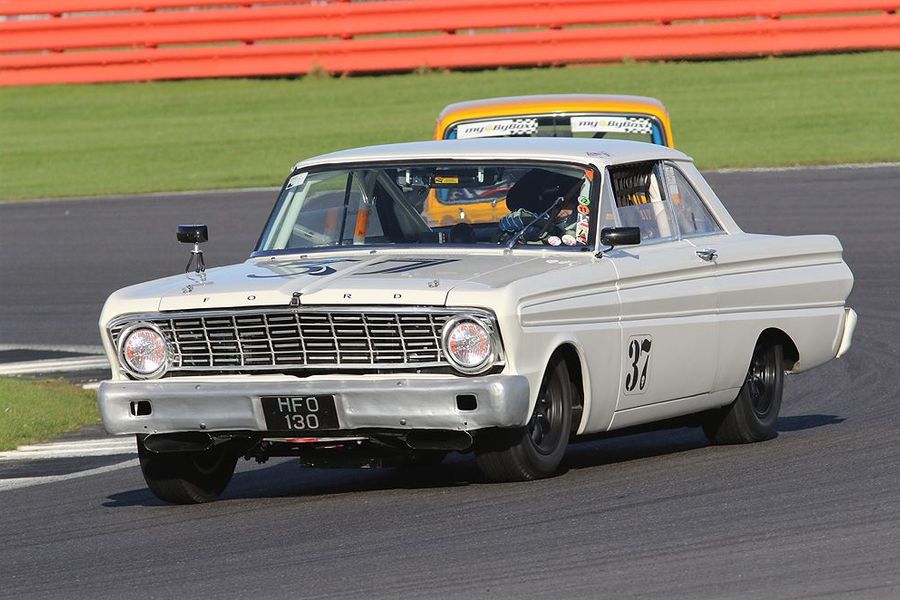 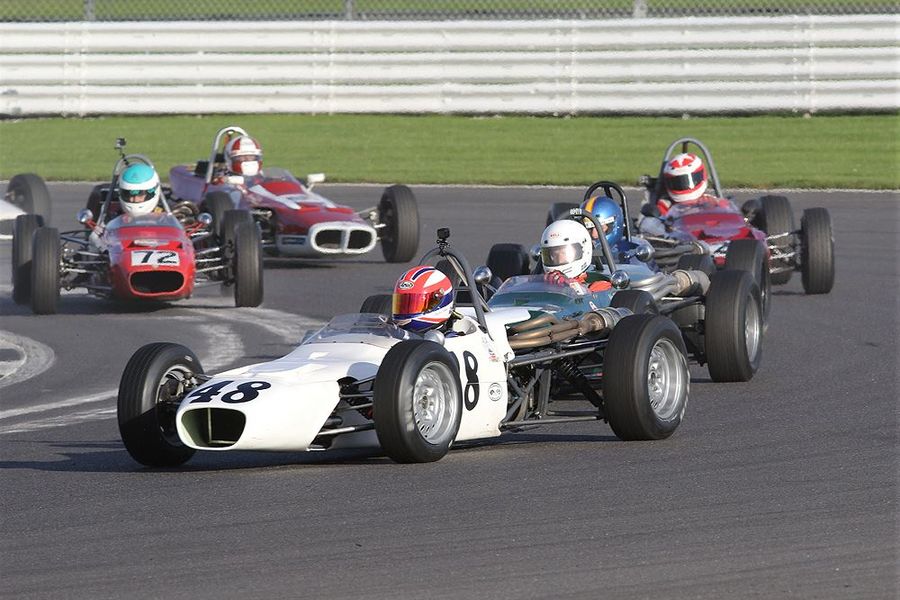 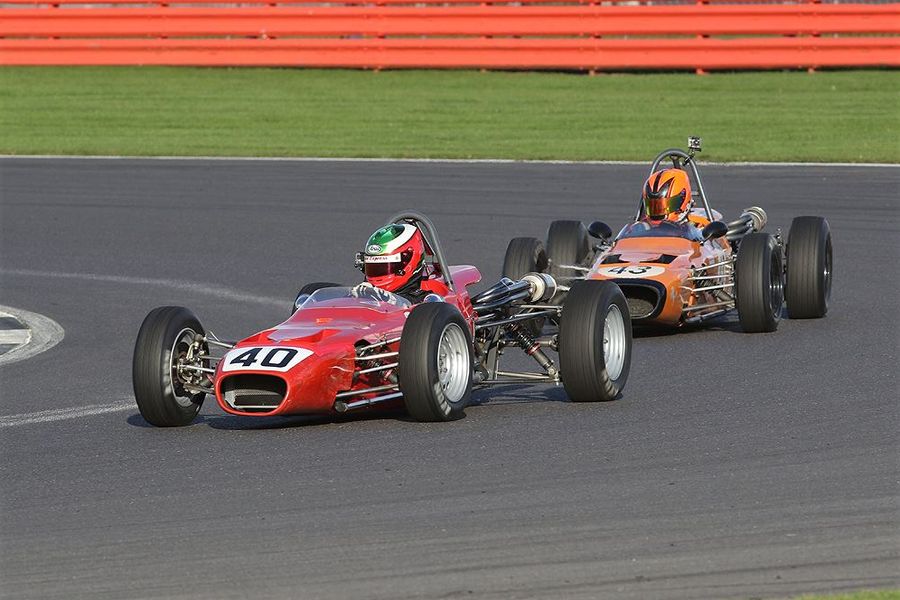 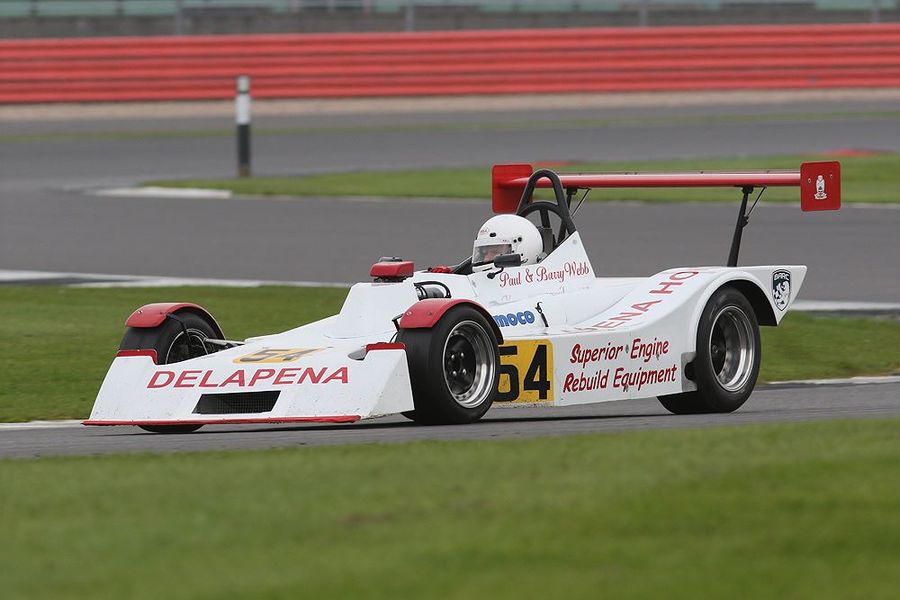 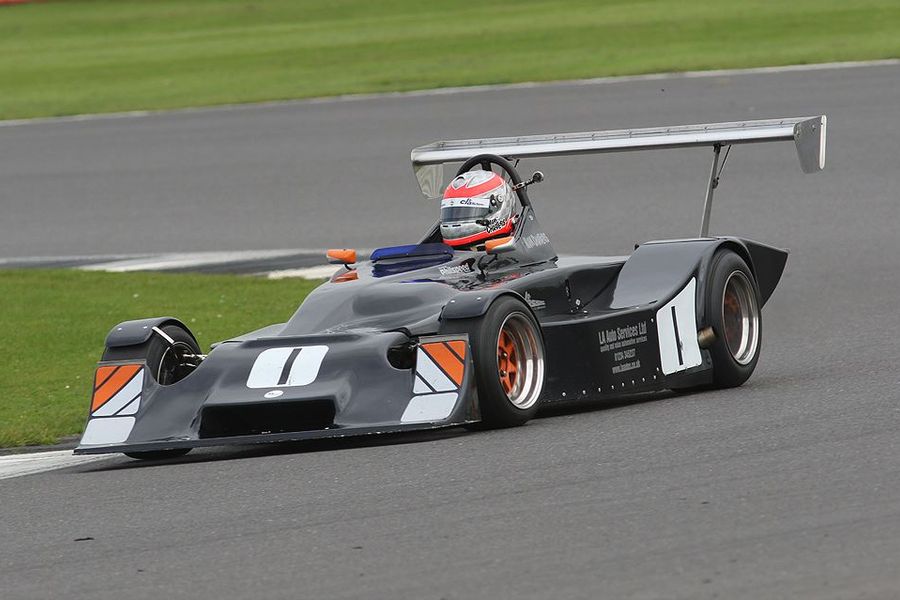 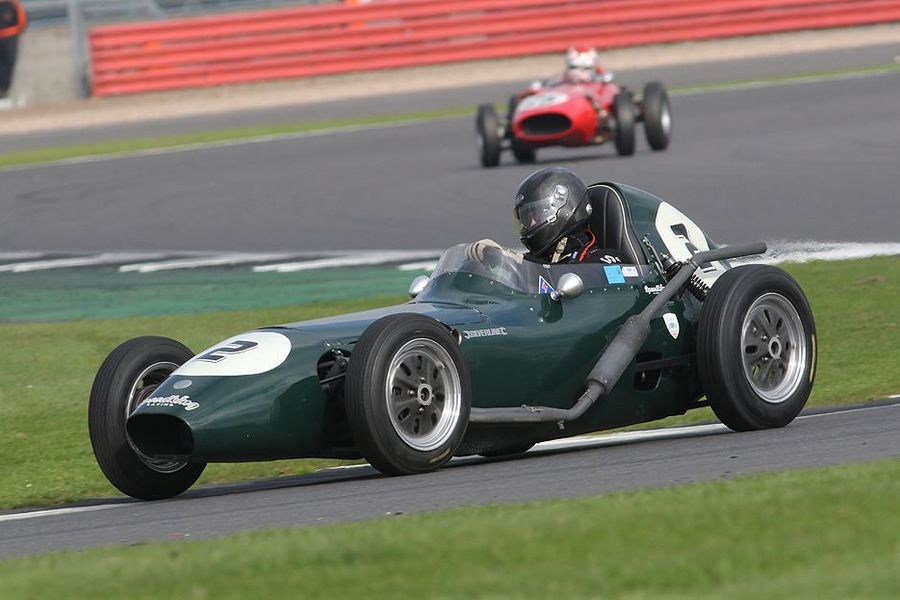 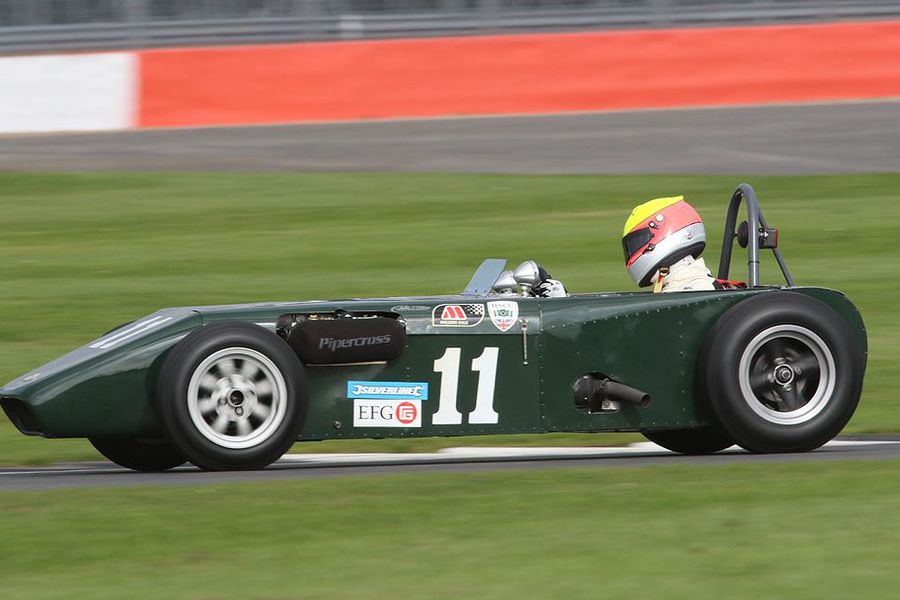 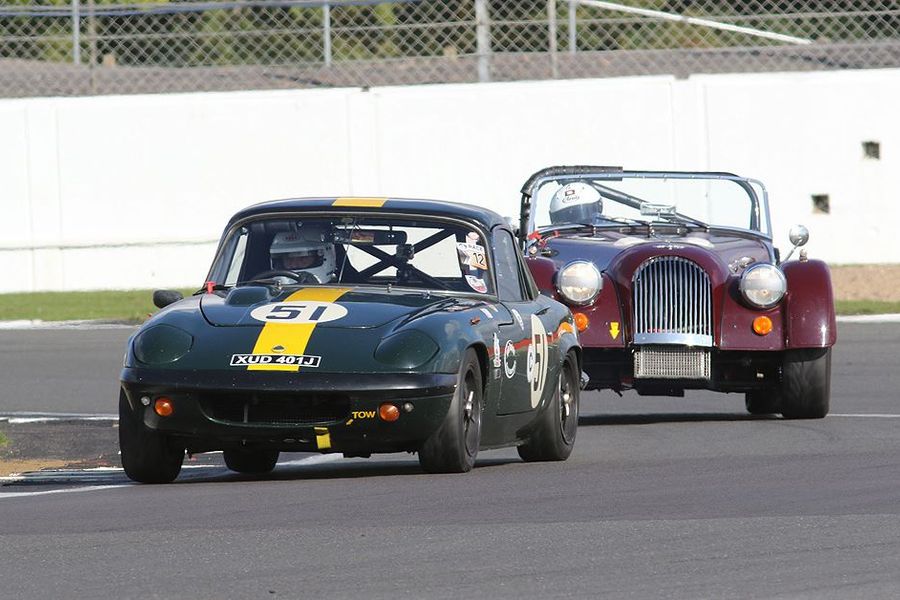 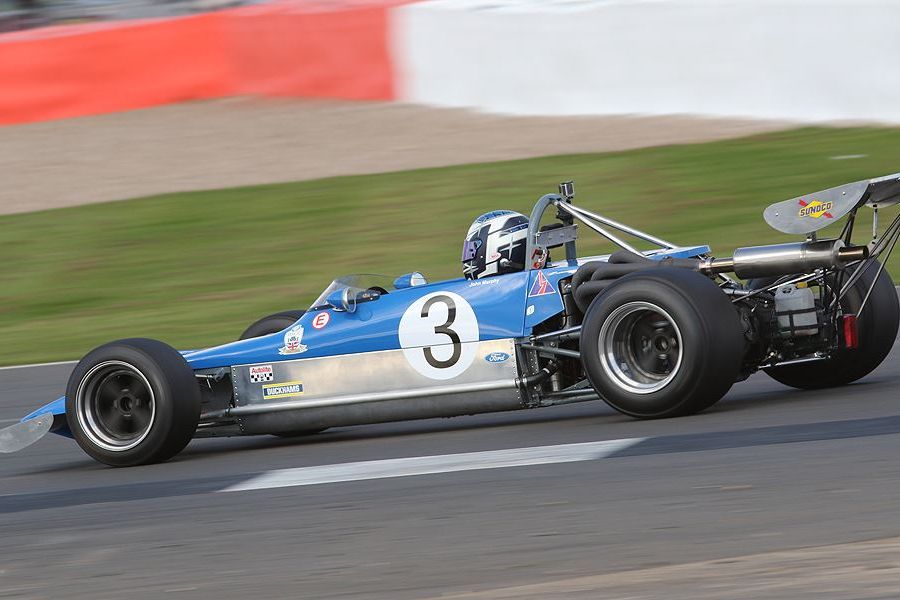 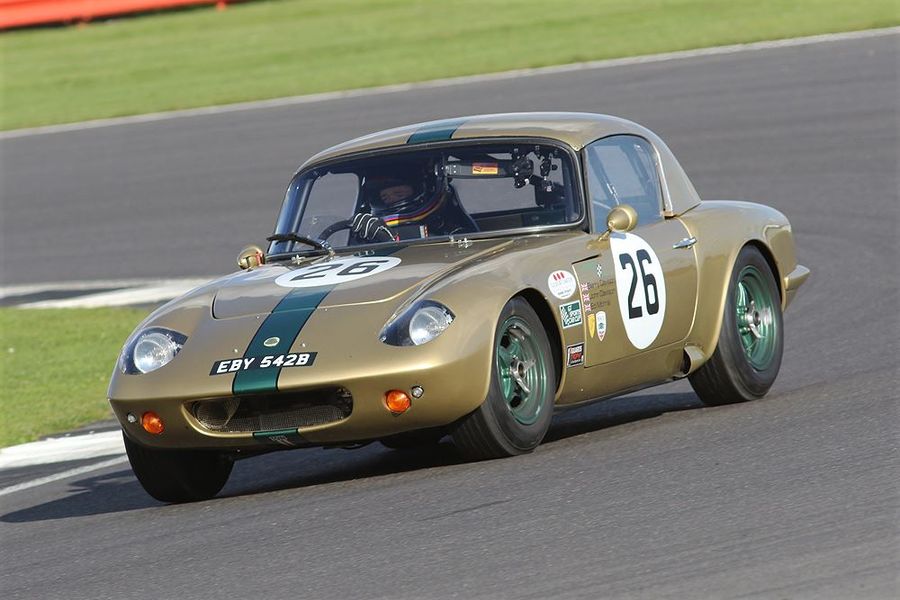 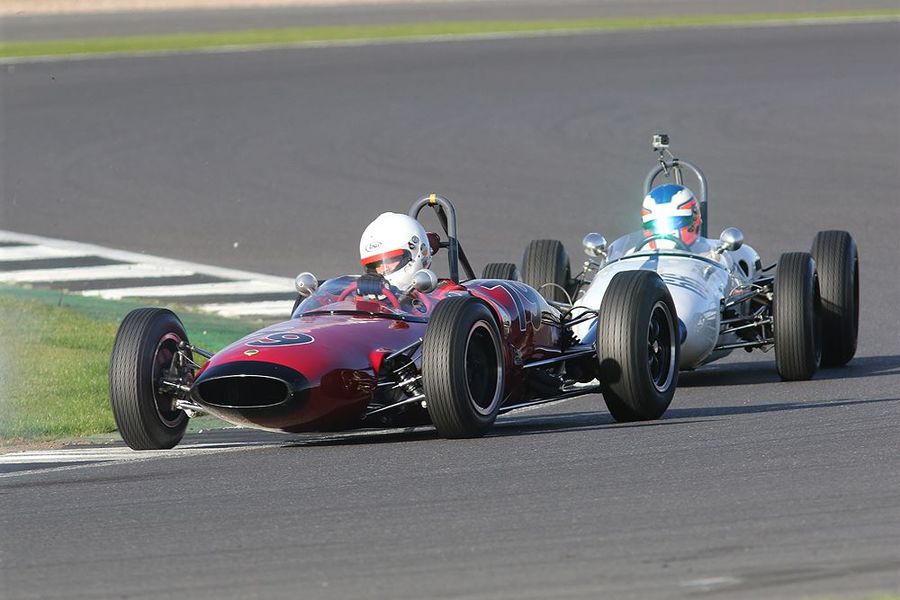 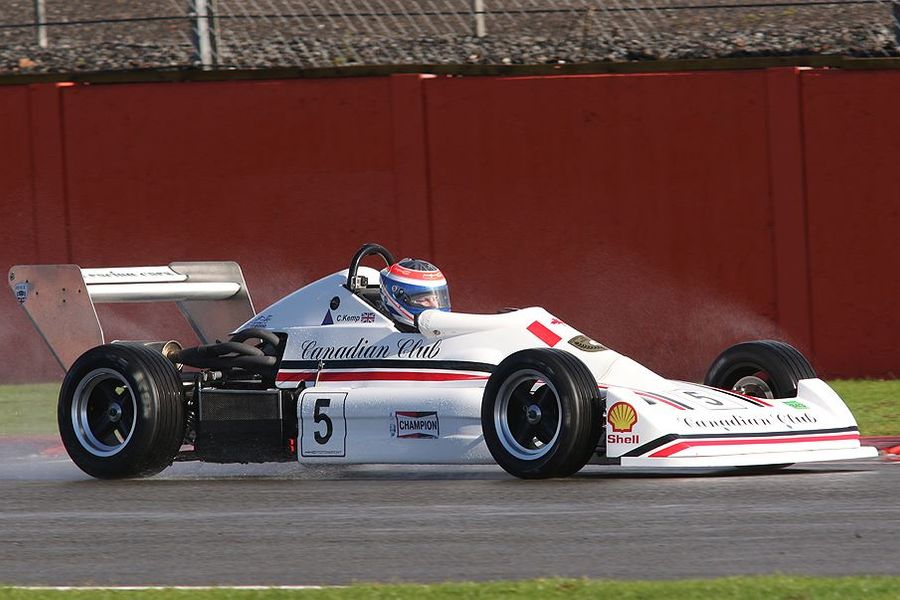 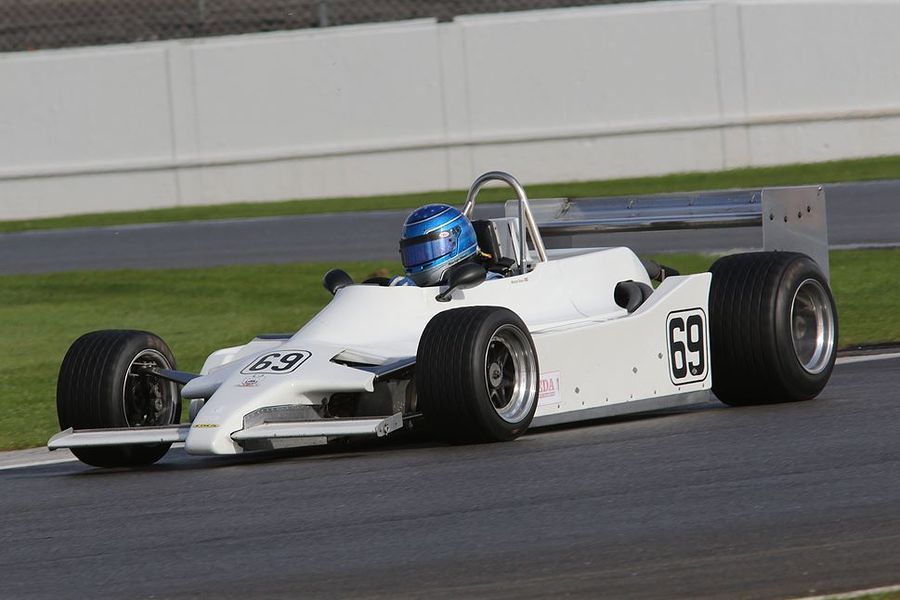 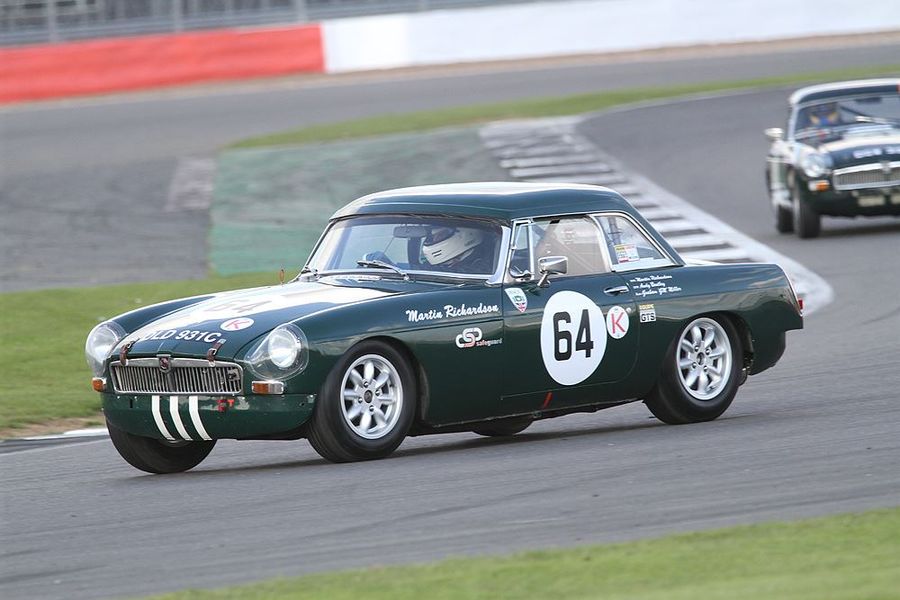 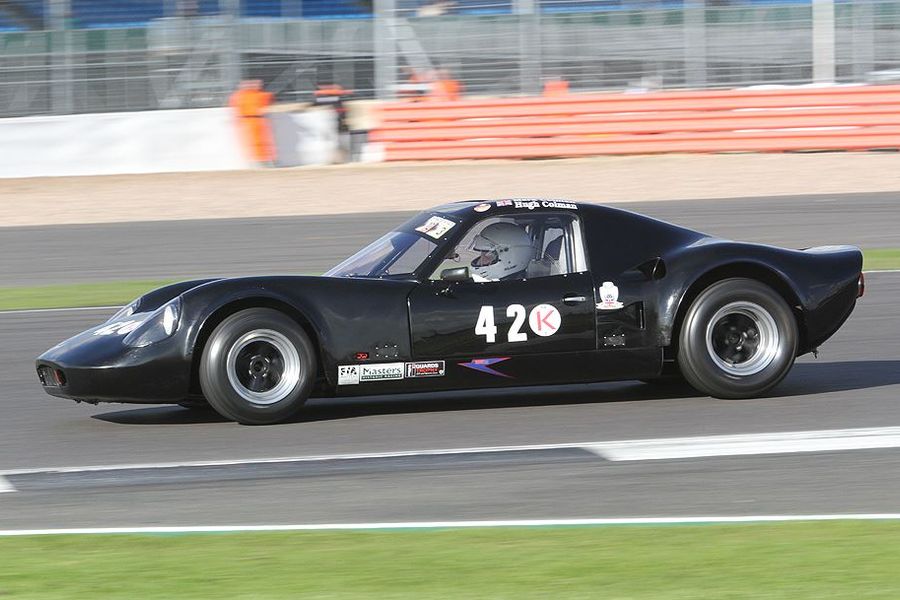 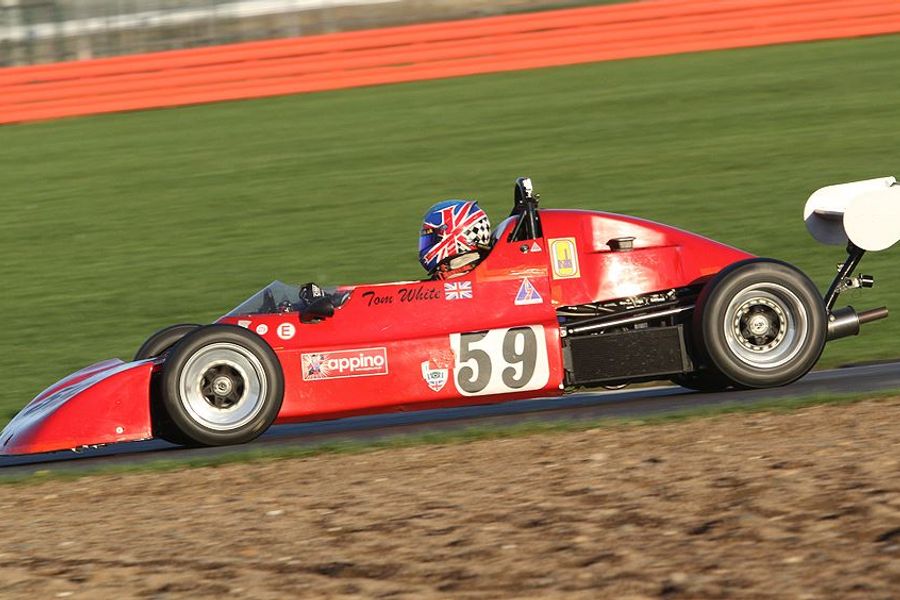 Click on the Gallery tab for pictures from Silverstone (Photo credits: Paul Lawrence)
The championship season for the Historic Sports Car Club finished in tremendous style at Silverstone over the weekend (15th and 16th of October) with some superb racing on the National Circuit. Running over two days for the first time, the weekend celebrated three drivers who competed in the first Griffiths Formula race at Castle Combe in 1966: the event that led to the creation of the HSCC. Bernard Worth presented a ‘driver of the day’ award to Historic FF2000 racer Tom Smith and his team for a mighty effort to get a damaged car back out in the very next race.
The Historic Formula Ford Championship went down to a straight fight between Callum Grant (Merlyn Mk20) and Rob Wainwright (Elden Mk8) and victory in the first of two championship races was the perfect way for Grant to clinch the title for a second time. Grant also won the Chris Mudge Memorial Trophy as aggregate winner across the two championship races.
The racing provided in four races by a 50-car Formula Ford entry was outstanding and the second championship race was one of the best of the season as up to 12 cars formed a lead pack. Eventually Sam Mitchell and Grant edged clear and former champion Mitchell took victory by a quarter of a second. Up into an incredible third went teenager Benn Tilley after starting 22nd on the grid for the qualification race, while fellow teenager Ed Thurston also starred as he took third in the opening championship race.
In the Historic Touring Car Championship, Simon Benoy managed to get his Hillman Imp repaired after a first-lap accident at Oulton Park at the end of August and raced the un-tried car to a brace of class wins to make sure of the title. In the opening race, run on a damp but drying track, Mark Jones just worked his Lotus Cortina ahead of the Mini Cooper of Jon Milicevic in the closing stages. Later in the day, on a fully dry track, Mike Gardiner (Ford Falcon) swept ahead.
Julian Barter settled the 70s Road Sports Championship title after splitting his season between a Lotus Elan and a Lotus Europa. Racing the Elan at Silverstone he enjoyed a tremendous battle with the Morgan Plus 8 of Richard Plant and on Sunday Plant was central to the Historic Road Sports race that closed the weekend as he led the chase of race winner Kevin Kivlochan in another Morgan.
The Derek Bell Trophy was settled in favour of Martyn Donn (Lola T760) after two tremendous races. The opener ran on a damp track and tyre choice was critical as Mark Dwyer swept to victory in his Formula 2 March 742. On a dry track, Jamie Brashaw thundered ahead in his Formula 5000 March 73A as Dwyer beat Neil Glover (Chevron B37) for second place.
Andrew Hibberd (Lotus 22) and Will Mitcham (U2 Mk2) shared victories in the HSCC/FJHRA Silverline Historic Formula Junior Championship rounds, while Mark Woodhouse (Elva 100) sealed the front-engined title. The Historic Formula Ford 2000 Championship delivered two winners as category newcomer Charlie Kemp (Reynard SF79) and Tom White (Osella FAF) took a win each after two excellent races.
The battle for the Guards Trophy was an absorbing contest as Martin Stretton (Elva Mk7S) took the fight to the Chevrons of Mark Colman and father and son pairing Michael and Will Schryver. Unfortunately, brake issues struck Stretton who eventually had to pull off with a seized rear caliper as Colman took a fine solo win.
The Guards title race ended in a tie when John Davison (Lotus Elan) and Martin Richardson (MGB) could not be split. Davison only needed to finish to be crowned champion, but suffered an electrical fire on the grid and finally retired after only nine laps. Mike Gardiner and Dan Cox (TVR Griffith) could have taken the title but a lack of class starters meant reduced points and left them short of Davison’s tally. Meanwhile 2007 champion Richardson won his class to equal Davison’s score.
Sharing a grid were the resurgent Classic Racing Car Series and a non-championship race for Historic Formula 3 cars. From a much improved grid of Classic Racing Cars, John Murphy (Crossle 22F) was victorious while Julian Stokes (Tecno) starred after a stirring recovery drive to second after spinning out of the lead at Becketts on lap one. Behind Stokes, Mark Goodyear (Lotus 59) drove a fine race to see off the Pallisers of Andy Jarvis and Stephen Worrad. Andrew Hibberd topped the Historic F3 cars in his Brabham BT18.
Mark Charteris added another victory in the final of the Classic Clubmans Championship, but had to find a way around John Harrison after a good battle over the opening stages. Barry Webb was confirmed as Class B champion after a steady run to a finish. Only Clive Wood could have beaten Webb to the title, but he lost the class lead to Adam Wheeler with a spin. Peter Needham (Tiga SC82) topped the invitation class for period Sports 2000s.
The combined Classic Formula 3 Championship and URS Classic Formula Ford 2000 Series double-header provided a strong grid and battles all the way down the field. In the damp opener, tyre choice was critical and Ian Pearson (Van Diemen RF82) moved ahead as his slicks came good. Later, on a dry track, David Shaw (Ralt RT1) put the F3 cars back on top with a narrow victory over Simon Jackson (Chevron B43) and Keith White (Ralt RT1).
HSCC Formula Ford FF1600