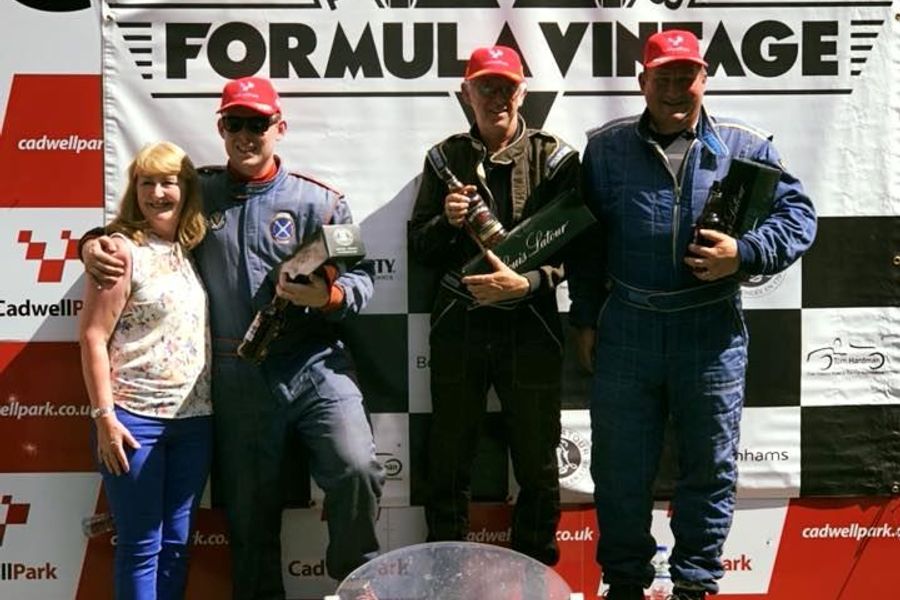 Click on the Video tab for cars leaving the collecting area at Cadwell Park.

Round three of the VSCC’s  Formula Vintage took place at Cadwell Park on Sunday, July 22nd, with some high-quality racing including the Garry Whyte Riley Handicap Race, a thrilling Frazer Nash Race, plus the triumphant return of the Intermarque Trophy.

The first race kicked off with Dougal Cawley taking the honours in his 1929 GN/Ford Piglet, 8.40 seconds ahead of second placed Richard Iliffe in his 1934 Riley Elf with Mark Gillies in his 1936 Aston Martin Speed Model third. The Dougal Cawley/Piglet combination proved once again to be consistent and successful finishing third in both race seven, the Frazer Nash Race and then two races later in the Intermarque Trophy Race.

William Mahany was the victor in the Geoghan Trophy in his 1938 HRG Le Mans Modelheading home young driver Tom Waterfield after Waterfield lost second gear on the last lap. Mahany later went on to take second in Race 6, behind Christian Pedersen in his flying 1932 Austin 7 Special. Pedersen continued to show his pace with second behind Julian Grimwade in his 1934 Frazer Nash Single Seat in the ninth race. Grimwade finished his day with another win, this time 2.81 seconds ahead of David Seber in his 1935 Wolseley Hornet Special.

The Garry Whyte Riley Handicap Race was  great spectacle, David Morley taking the Trophy in his 1932 Riley Special ahead of Andrew Baker driving his 1930 Riley Brooklands. The 1937 Riley 12/4 Special driven by Alexander Hewitson, which was built from the ground up by young VSCC member Garry Whyte, continued to celebrate his memory in apt fashion by grabbing fourth place.

The Spero & Voiturette Trophies Race saw the 'Drive of the Day' come from Angus Frost, pedalling Justin Maeers's 1929 Morgan Super Aero. Frost suffered a mechanical error early on in the race and had to pit, and after a quick tweak to the engine and a return to the  track he made up ground and time to finish an extremely creditable sixth, just 54-seconds behind the eventual winner, Christian Pedersen.

The return of the Intermarque Trophy Race saw the Frazer Nashs steal the win with an overall average speed of 83.97 mph, followed by the MGs with the Austin team third. The Frazer Nashs had seven entrants in the race, with the MGs bringing forward six and the Austins two.