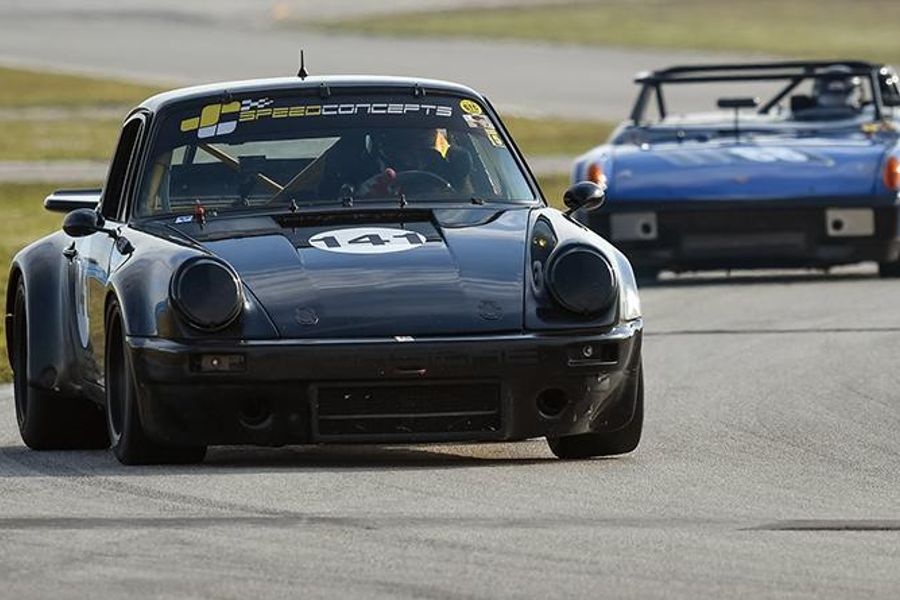 The one-hour B.R.M. Vintage and GT Classic (GTC) Enduro and season-ending sprints for the HSR Global GT and Sasco Sports series were run in quick succession Thursday afternoon, setting the tone for a competitive weekend of racing ahead at Sebring. Teaming up with race and championship-winning pro driver Leh Keen, Todd Treffert scored his second-straight Sebring B.R.M. Enduro overall and GT Classic (GTC) win in his Speedconcepts 1974 No. 141 Porsche 911 IROC. Treffert solo drove to the overall and GTC win in last year's B.R.M. Enduro finale at Sebring but was more than happy to share the top step of the podium this year with Keen.

"I have known Todd for a while and always wanted to drive his IROC Porsche," Keen said. "I am here to race in the Classic 12 Hour with Les Long but asked if I could also co-drive with Todd today and everybody said OK. I ran in the first Classic Daytona 24 a few years ago but haven't been at an HSR race since. It's a lot of fun and I am looking forward to a great weekend."

Keen brought the No. 141 to the checkered flag ahead of the Vintage-class-winning KMW Motorsports 1970 No. 88 Porsche 914/6 of Jamie Busby that finished an impressive second overall.

Third overall and second in GTC went to David Agretelis in the JWE Motorsports 1978 No. 92 Porsche 911 SC while Damon DeSantis and David Hinton co-drove the Heritage Motorsports 1974 No. 301 Porsche 911 RSR to third in GTC and fourth overall.

Busby was joined on the Vintage podium by Jonathan Ziegelman and his father Alan Ziegelman who co-drove to runner-up honors in their KMW Motorsports 1970 No. 5 Porsche 914/6. Third went to John Deford who completed a perfect Vintage-class sweep for 1970 Porsche 914/6 cars in his No. 57 entry prepared by the 901 Shop.

The HSR Global GT finale was won by Stuart Fain in his recently acquired Autometrics 2010 No. 990 Porsche 997 GT3 Cup. Fain came home a winner in just his second start - and first in HSR - in the patriotically-themed red, white and blue Porsche that was raced in its prime by Wright Motorsports. 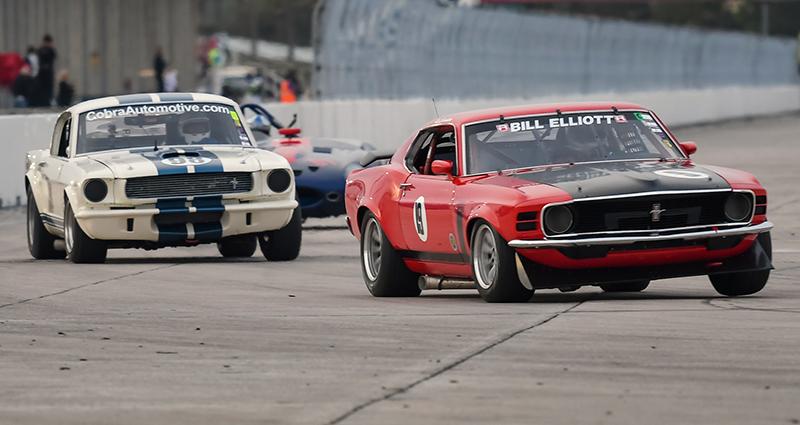 The season-ending Sasco Sports International/American Challenge race was won overall by Dennis Olthoff who also took American-class honors in a 1970 No. 19 Mustang Boss 302 prepared by his own Olthoff Racing team.

Olthoff shared the overall podium with International-division winner Larry Ligas who challenged for the lead in the early stages of the race in his Predator Performance 1961 No. 61 Jaguar XKE. Gary Moore was third overall and second in the American field in his Cobra Automotive 1966 No. 98 Shelby GT350.

Scooter Gabel won the Porsche division in the 1974 No. 159 Porsche 911 RSR and joined team owner and second-place finisher Carlos de Quesada in a one-two sweep of the class by Alegra Motorsports. The duo also did well to complete the overall top five, with de Quesada crossing the line in his 1973 No. 22 Porsche 911 just behind fourth-place Gabel.

Adam Lindemann rounded out a Mustang-sweep of the American class with a third-place showing in his 1966 No. 704 Shelby GT350. Alan Benjamin in turn completed the Porsche-class podium with a third-place finish in the Boulder Classics 1975 No. 61 Porsche 911 RSR.

Backing up his Sasco Sports International class win at Daytona earlier this month, Robert Albino made it to the podium again at Sebring in his Hudson Historics 1999 No. 99 BMW Z3 Coupe. Albino finished second to Ligas on Thursday and they were joined on the International podium by Hervey Parke who was third in his 1965 No. 11 Ginetta G4.

Still in part an active airport, Friday afternoon will once again see the arrival of vintage aircraft on one of the Sebring runways. The planes will later taxi into the paddock at 4:30 p.m. to be displayed right alongside the historic race cars through Sunday morning.

Aircraft scheduled to appear this weekend include a rare North American P-51D "Mustang" of Jim Lyons and a North American T6-G "Texan" being flown to Sebring by Jon Rising. Both planes will be making their event debut in addition to a first-time appearance by a 1943 Boeing N2-S3 Stearman.