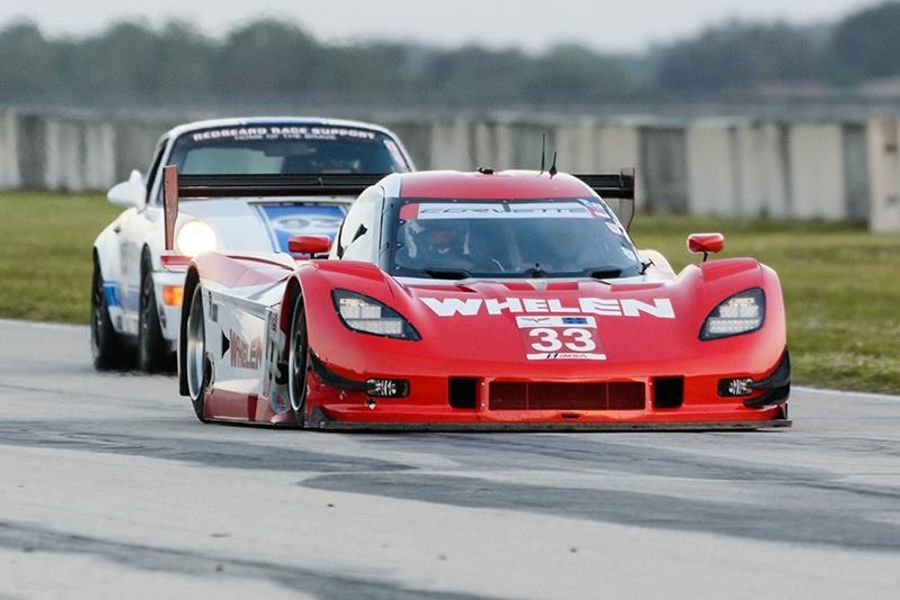 John Reisman drove the Hudson Historics-prepared 2010 No. 33 Coyote Corvette Daytona Prototype (above) to the overall B.R.M. Chronographes Enduro win Friday at Sebring International Raceway while Todd Treffert tripled-up on HSR feature race wins this weekend with a Classic RS Cup victory in his Speedconcepts 1974 No. 141 Porsche 911 IROC.
Both the B.R.M. Enduro, which included the Historic Prototype and GT Modern classes, and the Classic RS Cup race were part of this weekend's HSR Sebring Historics schedule. The season-ending event for the year-long HSR championships, the Sebring Historics shares the weekend card with the second annual Classic 12 Hour at Sebring, Pistons and Props, presented by the Alan Jay Automotive Network, which begins at Noon on Saturday.
While Classic 12 Hour competitors qualified Friday, the day's racing excitement came in the Sebring Historics events. Reisman soloed to the overall and Historic Prototype class victory and shared the podium with runner-up Travis Engen and third-place finisher Larry Huang.
Driving his 2005 No. 2 Audi R8 LMP1 prepared by GMT Racing, Engen finished on the same lap as Reisman while Huang took the final podium spot in his Savannah Race Engineering 2009 No. 25 Oreca FLM09.
The B.R.M. Enduro GT-class win went to Stuart Fain who finished an impressive fifth overall in the 27-car field. Fain co-drove his Autometrics 2010 No.990 Porsche 997 GT3 Cup with Cory Friedman.
Henri Sicotte and his GT Racing teammate Mikael Grenier co-drove the 2010 No. 88 Chevy Camaro GT.R to second in GT while Mac McGehee hit the HSR podium for the second-day in a row with a solo drive to third-place. On Friday, McGehee finished second in his Autometrics 2010 No. 097 Porsche 997 GT3 Cup in the Global GT race.
The B.R.M. Enduro also included a Prototype class for Radicals that was won by British co-drivers Chris Milner and Nigel Greensall in the 2013 No. 117 Radical SR3. The victory highlighted Milner's HSR debut in his first ever visit to Sebring International Raceway.
Runner-up honors in the Prototype Radical class went to Rich Thomas who soloed to second in his 2015 No. 738 Radical SR3/RSX.
Friday's other feature race was the season-ending round of the HSR Classic RS Cup that saw Treffert take his third race win in as many starts already this weekend at Sebring. Second place went to Stuart Milne in the 901 Shop No. 11 1973 Porsche 911 RSR while Scooter Gabel completed the Classic RS Cup podium with a third-place showing in the Alegra Motorsports 1973 No. 22 Porsche 911 RS.
Treffert added the Classic RS Cup win to his Friday victories in the B.R.M. Classic GT Enduro and the International class in the Bob Woodman Tires Challenge.
The American class and overall winner in Friday's Bob Woodman race was Curt Vogt, who joined Treffert today as a repeat race winner at the Sebring Historics. Vogt's win today in his 1970 No. 23 Ford Mustang Boss 302 prepared by Cobra Automotive came in the first Group 5 WeaherTech Sprint race of the weekend.
Engen also joined the ranks of repeat race winners at the Sebring Historics, adding a Group 2 WeatherTech Sprint win in his GMT Racing 1962 No. 1 Lotus 23B to his Vintage-class win in the Friday B.R.M. Enduro.