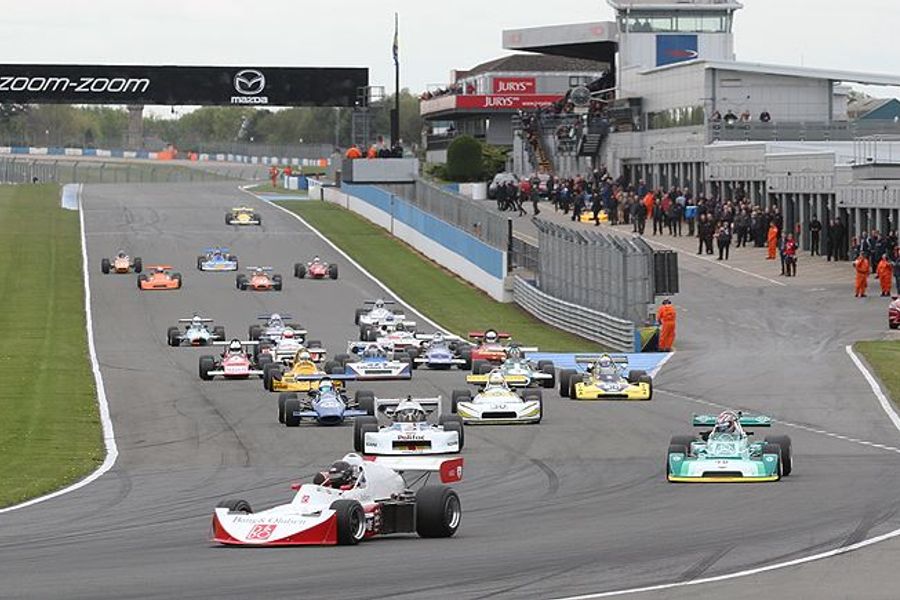 Wins for Frazer Gibney and Richard Evans capped the opening event in the HSCC Historic Formula 2 FIA-sanctioned International Series at the high-profile Donington Historic Festival over the weekend (28-30 April).
With a fantastic 27-car field, close racing across all classes and a tremendous spirit in the paddock, it could not have been a better start to the 11th season of Historic Formula 2 run by the Historic Sports Car Club. Adding to the impressive grid was the fabulous Ferrari 166 Dino of Graham Adelman, believed to be the first Ferrari ever to run in Historic F2.
Evans (March 742) headed the field in qualifying with a sub-1m5s lap as Mark Dwyer (March 742) and Jamie Brashaw (Chevron B25) led the chase. Unfortunately engine problems then sidelined Brashaw but a fine 25-car field lined up for the first 25-minute race on Saturday.
Evans discovered he had no first gear as he left the pits, so had to start in second and was quickly bundled down to third as Dwyer headed Daniel Gibson (Chevron B42). Once into his stride, Evans moved up and took the lead at Redgate despite the best efforts of Dwyer. Gibson was an early retirement with an electrical problem and Evans was not destined to finish when a fuel metering issue stopped his March with six laps to run.
Dwyer re-took the lead, but pulled off at Redgate with three laps to run when the gear linkage failed, so it was a surprised but very pleased Frazer Gibney (March 782) who came through from fourth to score his first F2 win. Up into a tremendous second place came 1600cc class winner Robert Simac (March 712M) who had considerable pressure from Martin Bullock (Chevron B17C) over the first half of the race.
Mike Bletsoe-Brown (Chevron B27), Alain Lagache (March 712M) and Luciano Arnold (Brabham BT36) completed the top six while Peter Alexander (Chevron B29) took the Formula Atlantic class by less than a second from Matthew Wrigley (Ralt RT1).
On Sunday, in the weekend’s second race, Bletsoe-Brown led the opening laps as Evans, Dwyer and Gibson fought through from further down the grid. An early seven-car lead pack made a great spectacle for the big crowd.
However, as the race developed Evans was peerless and romped away for a commanding win. Dwyer battled against a broken exhaust but still claimed second place and had an easier time once Gibson’s Chevron stopped with another electrical gremlin. Simac and Bullock ran close for the 1600cc class before Simac wriggled ahead of Bletsoe-Brown in an absorbing contest. Bullock was still a strong fifth while Jeremy Wheatley (Surtees TS15) worked up to sixth after a suspension failure in the opening race. Mike Wrigley (March 79B) also came up the order well after retiring in the opening race and clinched the Formula Atlantic class over his son Matthew.
The HSCC Historic Formula 2 FIA-sanctioned International Series continues with races three and four at the Nurburgring (June 17th/18th), but before that date some of the cars will race at Pau (France) on 26th/27th May.