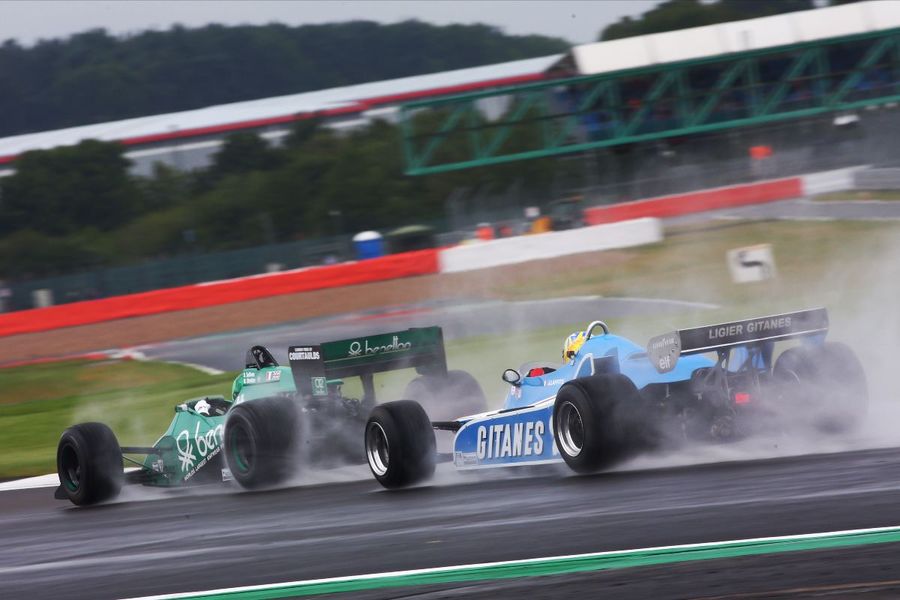 The race element of the 2019 Silverstone Classic burst into life on Super Saturday as a total of 12 races, wowed the record crowds around the famous Grand Prix circuit who were also treated to a wealth of off-track entertainment. The line-up of retro races kicked off with the HSCC Classic Formula 3 race and concluded into darkness with the Le Mans prototypes contesting the Aston Martin Trophy for Masters Endurance Legends.

Mike Cantillon headed the field early on in his Williams FW07C before Martin Stretton seemingly took control in the striking Tyrrell 012. However, all eyes were on the flying Ligier JS11/15 of Matteo Ferrer-Aza, with the Italian on a real charge. Ferrer-Aza – driving the ex-Jacques Laffite machine – eventually put both Cantillon and Stretton to the sword, taking a fantastic victory in front of the watching Sir Jackie Stewart. 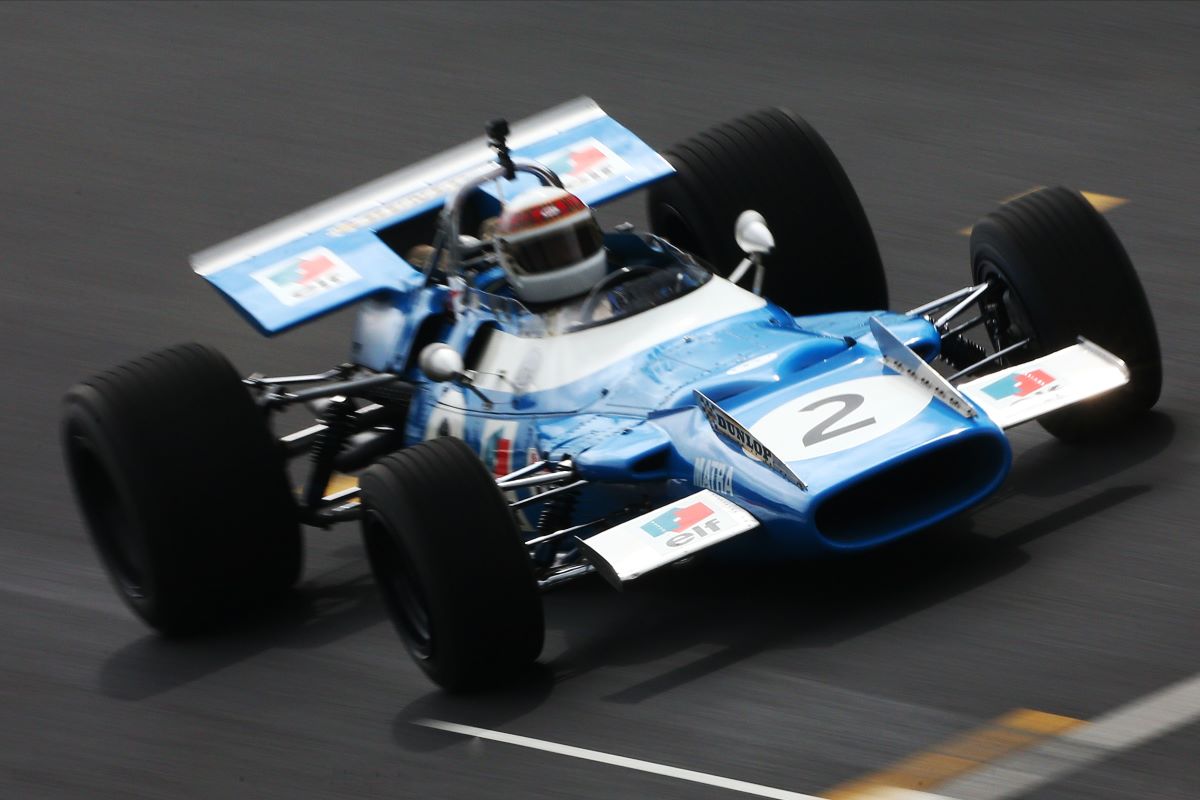 The final race of the morning was another showstopper as Martin Hunt and Pat Blakeney-Edwards defended their crown in the Royal Automobile Club Tourist Trophy for Historic Cars (Pre ’63 GT), having won the same race last year. A duel between two Jaguar E-types scrapped for early supremacy before the AC Cobra of Hunt and Blakeney-Edwards finally won the battle after a mid-race safety car period.

Arguably the most memorable on-track moment of the day took place in the Transatlantic Trophy for Pre ’66 Touring Cars, which was eventually won by the Ford Mustang of Rob Fenn and Jake Hill. Hill was battling for the lead with the identical machine of Craig Davies when the pair made contact, sending the former into a spin. Recognising his part in the incident, Davies let Hill back past before further drama followed on the final lap.

With bodywork rubbing on the rear-left tyre of Hill’s damaged car, the tyre eventually blew out on the Hangar Straight. In keeping with the true spirit of the Silverstone Classic, however, Davies refused to re-pass Hill for the remainder of the lap and the young BTCC star crossed the line – on three wheels – to take a truly remarkable victory.

Legendary Le Mans cars running into darkness is always one of the major Saturday evening highlights at any Silverstone Classic, and this year’s three race soirée proved very special, too.

Firstly the big 1926 8-litre Bentley 3/8 shared by father and son team Tim and Oliver Llewellyn, fittingly, winning the Bentley Centenary Trophy for Pre-War Sportscars, but only after fending off a race-long challenge from Rüdiger Friedrichs in his 1933 Alvis Firefly.

The focus then switched to the 60s and 70s with brothers Andrew and Max Banks winning the Yokohama Trophy for FIA Masters Historic Sports Cars in their McLaren.

The third element in the ‘Twilight Tribute to Le Mans’ boasted 180mph prototypes as the Aston Martin Trophy for Masters Endurance Legends brought the story almost up to date.

While the race was impressively won by the Pescarolo LMP1 shared by Jonathan Kennard and Mike Cantillon, most eyes were on the UK racing debut of the Bentley Speed 8 – the car that gave Bentley its most recent win at Le Mans in 2003.

Earlier in a memorable day of relentless racing, Oliver Bryant claimed overall honours in the Royal Automobile Club Woodcote and Stirling Moss Trophy in his Lotus 15, after coming out on top of a titanic tussle with David Hart’s Lister Costin Jaguar.

A pulsating three-way fight for victory took place in the HSCC Historic Formula 2, which went to the wire. Miles Griffiths won the war in his Ralt RT1, from Darwin Smith’s March 722, whilst Martin O’Connell’s Chevron B40 spun out of the lead dice on the final lap.

If the racing action wasn’t enough for the tens of thousands of spectators then further iconic car parades and demonstrations provided yet more eye candy. A special Bentley centenary anniversary parade and Abarth 70th anniversary parade were the particular standouts in a total of more than 20 circuit cavalcades, whilst a high-speed demonstration from the World GP Bike Legends proved extremely popular among the spectators.

The 2019 Silverstone Classic is far from over  with another huge bill of nine races and phenomenal entertainment scheduled for tomorrow, Sunday. 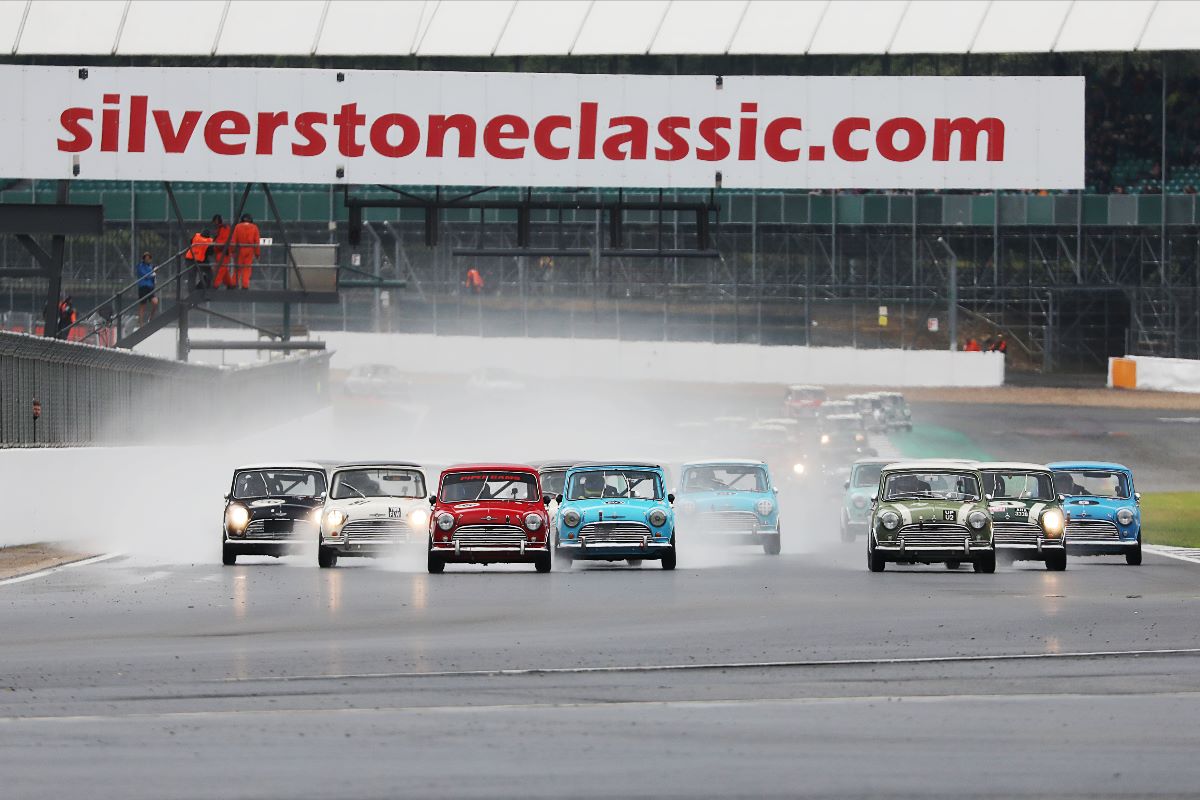 Gallery: Endurance Legends at the Classic