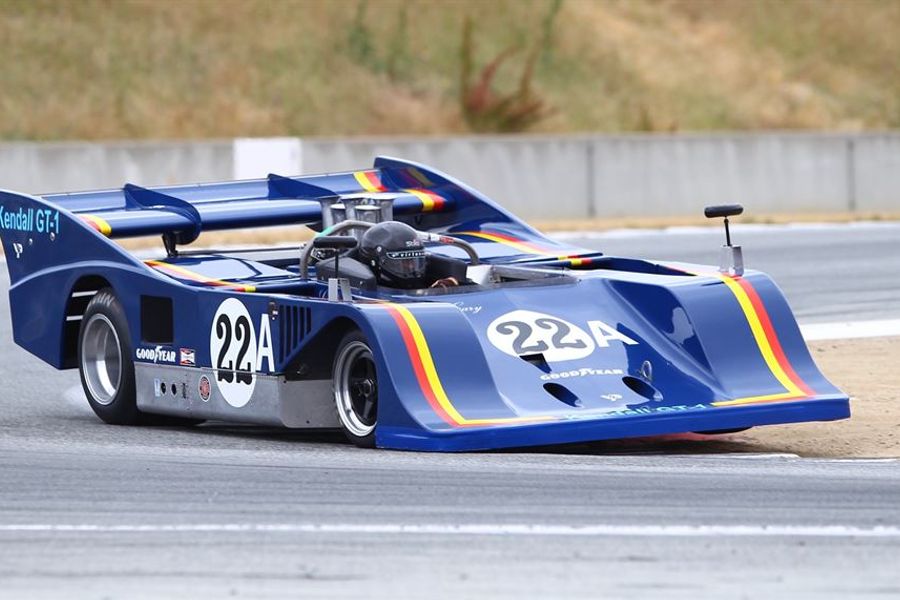 In its second year, the Spring Classic Showcasing Nitro Revival at Laguna Seca on May 18-20 grew into its realized form as a vintage motorsports festival for racing of all types from the 1960s forward. More cars filled the run groups in the three-day vintage car race, the Historic Motorcycle exhibition and display blossomed to give two-wheel enthusiasts a thrill, and the added element of nitromethane on Saturday provided the missing ingredient to morph the vintage car race into a full-blown motorsports extravaganza.

Over 30 members of the International Drag Racing Hall of Fame including “Big Daddy” Don Garlits signed autographs and mingled with fans while restored Top Fuel dragsters, Funny Cars, altereds, and more cackled their engines in the paddock. A highlight was push-start demonstrations on Saturday afternoon that brought legendary dragsters to life on an iconic race track not known for hosting machines designed to accelerate down the quarter-mile. Three dozen dragsters closed Saturday activities in a great spectacle by firing all at once in the “Line of Fire” that rumbled through the Monterey Peninsula hillside. Nine groups of vintage race cars competed on Saturday and Sunday with two races being decided each day with the exception of Groups A, F, and I – a pool of whom combined for a one-hour enduro to close racing on the course on Saturday. Clay Koevary won the enduro in the 2000 Porsche GT3R that was originally campaigned as the "Aspen Knolls" car by Mike Colucci Racing in 2000.

The SCCA GT & IMSA RS cars in Group A saw Mike Thurlow putting a thorough whooping on the rest of the grid by sweeping both Sunday races in his 1976 Chevrolet Camaro that Michael Beard originally drove at SCCA events. In the one Saturday race, he finished second on the podium to Jeffrey Abramson in the No. 56 Peerless Racing Camaro.

1967-1980 Formula Ford had great back-and-forth racing in Group B. Nicholas Colyvas drove his 1969 Merlyn MKII to victories on Saturday Race 2 and Sunday Race 1. Martin Lauber, who raced during the original period, kicked things off with a win in Saturday Race 1. Chris Porritt got in on the action with a Sunday Race 2 victory in his 1971 Lola T202.

Lauber also raced with the 1965-1978 Formula B & 1965-1977 Formula C cars in Group C, scoring a win in Saturday Race 1 and second-place finishes in the following two races driving a 1969 Brabham BT29 that originally raced in Formula B. Jim Catchot earned back-to-back wins with his 1968 Chevron B10 on Saturday afternoon and Sunday morning. Travis Engen made his trip from the Eastern seaboard worthwhile by punctuating with a win in his 1970 Chevron B178. Engen doubled down with a win in Group H on Sunday driving a 1976 Ralt RT1.

Former Wal-Mart chairman Rob Walton had a strong outing in the Sports Cars Under 2.0 Liter class in Group D with three consecutive victories in his 1960 Maserati Tipo 60 on Saturday afternoon and both Sunday races while also competing with the 1966-1972 Trans-Am 2.5-liter cars in Group G with a race-provenant 1967 Porsche 911 S. Walton finished second in Saturday Race 1 just behind Alec Hugo’s 1962 Porsche 356B.

Fans familiar with NASCAR racing enjoyed the machines in the Group E 1974-2007 Stock Cars grid that some of their oval heroes once raced. Frank Marcum had the most success with two morning wins and two second-place finishes in the afternoon in the No. 11 2001 Ford Taurus that Brett Bodine once raced with Hooters sponsorship. The afternoon races were won by Mac McGarry on Saturday in a 1989 Chevy Lumina formerly driven by Ken Schrader and Tom Cantrell on Sunday in the No. 12 2005 Dodge Charger that Ryan Newman drove on road courses in 2005 and 2006.

The screaming Can-Am cars in Group F were popular with fans on the track and in the paddock. Ilja Burkoff drove a 1970 TRC Ti 22 MkII that competed here in the 1970-1972 seasons, and he won twice in as many attempts in both morning races. With Burkoff sitting out the last race, Scott Drnek nabbed the top podium step with his 1974 Sting GW1 with a best lap time of 1:32.0.