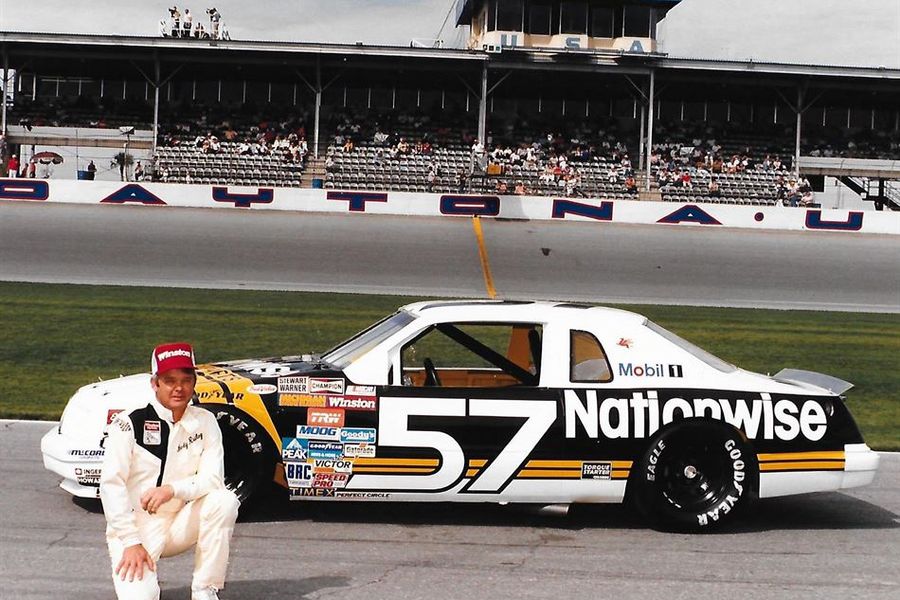 Photo: Jody Ridley poses with his Ford Thunderbird prior to the 1986 Daytona 500
When one thinks of vintage, it is many times measured in decades. For the Historic Stock Cars group at the inaugural Spring Classic May 19th-21st at Mazda Raceway Laguna Seca, it may mean only 14-years since the last time it raced professionally.
More than two dozen stock cars from the 1979 to 2006 racing seasons will debut at the inaugural Spring Classic vintage car races. Dedicated to the theory that authenticated stock cars must be preserved, restored, and race, these big and bold V8s will be roaring through the Corkscrew as a dedicated group, many for the first time ever on the fabled road course.
“Historic stock cars represent a new slice of American race history,” said Gill Campbell, CEO and general manager of Mazda Raceway Laguna Seca. “Sadly, all too often, these cars were tossed aside for parts, but now a new generation of buyers are saving them and driving them for the enjoyment of fans.”
In keeping with the Sports Car Racing Association of Monterey Peninsula’s (SCRAMP) credo, only cars that have actually raced are accepted. No fakes or clones are invited to participate. The oldest in this group is the 645 horsepower Ford Thunderbird that was originally driven in 1986 in Daytona by Jody Ridley. The newest is the 2003 Chevrolet Monte Carlo that raced at Watkins Glen and powered by an 800 horsepower V-8.
Stock car racing has history at the iconic road racing course. The NASCAR Winston West Series held events at Mazda Raceway Laguna Seca in 1980 and 1981 with grids that included Richard Petty, Bobby and Davey Allison, and Salinas, Calif., native Ernie Irvan – all of whom were among NASCAR’s 50 Greatest Drivers selected by a panel during NASCAR’s 50th anniversary season.
The Spring Classic features a diverse field of race cars over the three-day racing weekend. Complementing the Historic Stock Car group will be fields for 1967-1972 Formula B, 1973-1984 SCCA Production GT Cars, 1966-1974 Can-Am, 1973-1979 Formula Atlantic, 1983-2007 World Sports Car/Le Mans Prototype, 1966-1972 Historic Trans-Am and 1962-1972 Trans-Am 2.5 litre cars. There will also be a one hour enduro to end Saturday’s sessions, as well as daily Historic Motorcycle exhibitions.