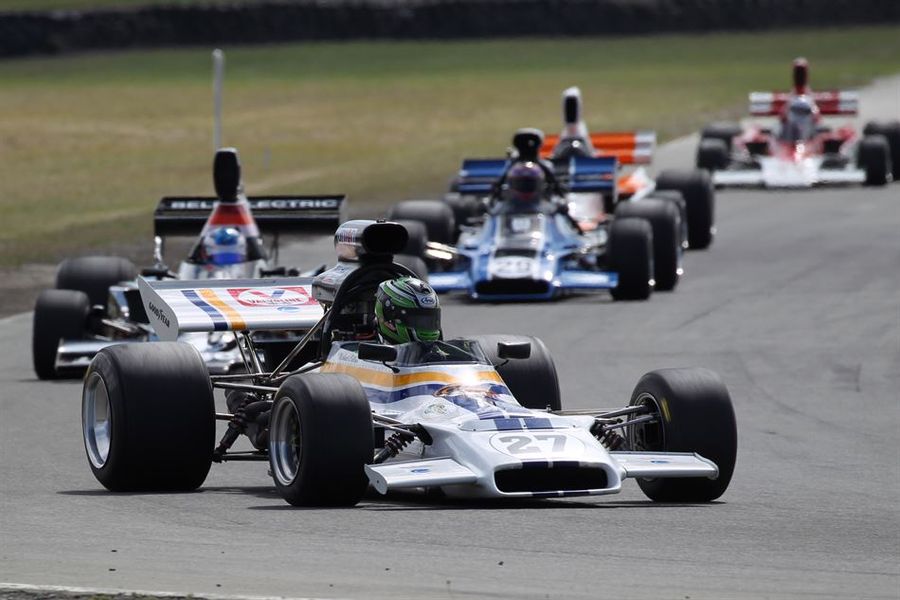 Fastest qualifier Ken Smith (Lola T332) led from the rolling start and again after an early Safety Car period caused by a multi-car collision as the 13-strong field thundered into the first corner. But just when it looked like the 75-year-old category super veteran was going to stroke home for another win he slowed and headed for the pits.

“It just started making a tappet-y sort of noise from the engine,” he said after the race. “It’s just a new one so it was better to stop and give it a check over rather than keep going and risk doing more damage to it.”

“It feels very similar to my Lotus 77, “said Thornton. It’s from an earlier era but the 77 still had a sheetmetal monocoque so there are obviously similarities between the two.”

Next across the line was Auckland driver David Banks enjoying a competitive run in his new Lola T332 followed by Grant Martin (Talon MR1A) and Ian Clements, who ran strongly until the final lap when he slowed, and struggled across the finish line thanks to broken gear lever.

Unfortunately the contact  at the first corner saw damage to Glenn Richards’ Lola T400 and Steve Ross’s McRae GM1 though both Ross and Brett Willis – who ended up in the gravel trap as he tried to avoid other cars pinballing into his -  were able to get a back going and finish the race in 10th and 11th place respectively.