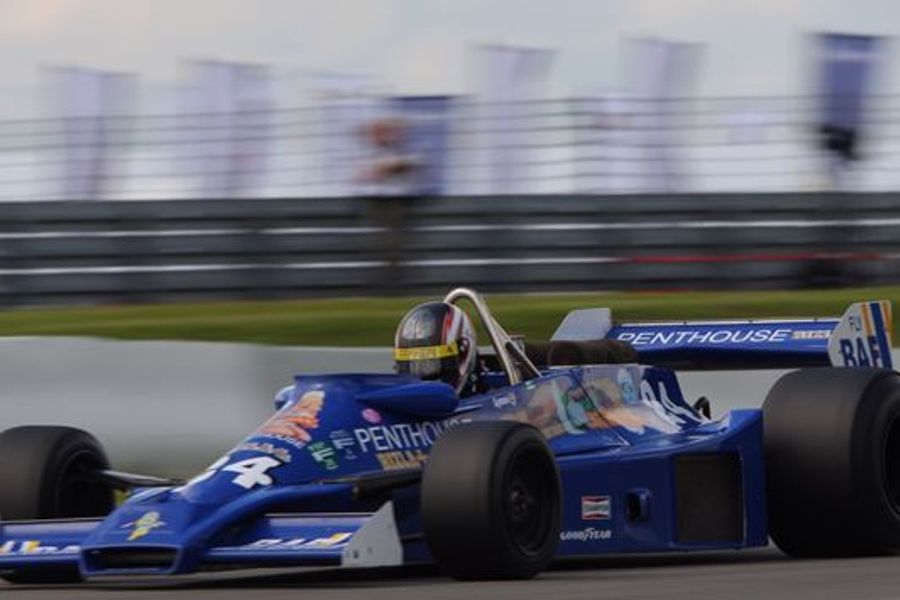 Michael Lyons (Hesketh 308E) scored a superb win at the Nürburgring Oldtimer GP, despite having to start from the pit lane. He was chased home by Silvio Kalb (Arrows A4) who dominated the race but spun at an oily turn 10 a lap and a half from home. Spots of rain fell on the out lap to the grid but as the cars formed, the rain began to intensify. No tyre changes were permitted on the grid under the series regulations, so many cars headed for the pit lane and a frantic few minutes of work as the rolling start lap began. In total nine cars started from the pit lane and Lyons was seventh in the queue as the cars were released as the pack headed to turn one. With no front row, Kalb had a clear road ahead but Manfredo Rossi (Brabham BT42) edged ahead on the run to the first corner. Kalb soon asserted himself and took the advantage with Rossi second. Attention focussed on the quickest of the pit lane starters: Lyons, race one winner Steve Hartley (Arrows A4) and Simon Fish (Ensign N180) and they were fourth, fifth and ninth after just four laps. “It was tough with Steve behind me,” said Lyons afterwards. “Only when he made a small mistake and dropped back did that left me concentrate on my race and find my reference points. Then I just pushed as hard as I could.” After four laps, Lyons was 25 seconds behind ace leader Kalb, but he soon moved ahead of Rossi and closed on the German. With two laps to go, it was down to 9.1 seconds, but Kalb seemed assured of a win, but he was caught out by a slippery turn 10 that had caused others to slide during the race. Kalb spun and Lyons gleefully picked up the race lead. He was ahead starting the last lap and never looked back. “After four attempts this year," said Lyons, "we’ve finally won one! It was hard in those conditions but it was all about making the least number of mistakes today.” Behind the Hesketh, Kalb took second with Hartley third. Had he started from the grid he would have been on pole… Fourth was Rossi ahead of Fish, with Marc Devis (Arrows A3) completing the top six. Lyons added to his outright win by being the best of those in the Pre-1978 division, with Rossi second and Max Smith-Hilliard third. The championship moves next to the Zandvoort Historic Grand Prix on August 29-31.