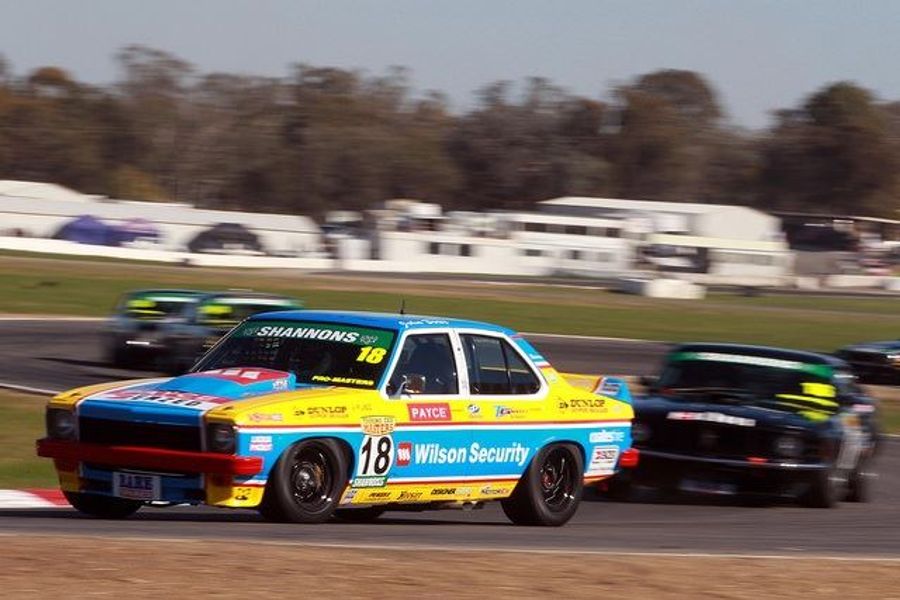 After topping the charts in Friday's practice, John Bowe took pole position and a pair of sprint race victories today to open his account in the Rare Spares Rose City Classic in style at Winton Motor Raceway.  Bowe claimed pole on a cool Saturday morning – scoring the first ever Holden pole position in qualifying in ENZED TCM history – before leading lights-to-flag in both 10-lap races to give the Torana model its first race wins in the series as well.
Gavin Bullas finished second in both races and Glenn Seton third, though the pair of Ford drivers weren’t quite able to challenge the flying Bowe today.  “It’s been a great day and a great little car,” Bowe said. “I honestly wasn’t expecting it to be this good, though if there was going to be a track that suits the car, it’s here. We’ve made a few changes but nothing that has required us to think outside the usual parameters – the car is great. “I’m most pleased for Gary O’Brien and his team. It’s been a two and a half year process to build the car and a real labour of love, it’s great to be able to reward that.” Bowe said that he was aware of the competition behind this weekend – especially the looming, black Ford Mustang of double-champ Gavin Bullas. “Gavin has taken a big step up this year with his new car and Savy Motorsport running it, which is great to see. He’s always there in the mirrors and is right there.” Bullas started second following a solid qualifying performance and pressured Bowe in each of today’s races, never dropping more than 1.5 seconds behind the quick Torana in the lead. Seton had a solid run to third in race one before engaging in a dual with Camaro driver Andrew Miedecke in the second race in a battle that went right down to the line. Miedecke grabbed third on the opening lap but was forced to cede the position on lap three when a power steering issue slowed the Lubrimaxx Camaro, allowing Seton past again. Sixth and fifth in the two races, respectively, for Mark King positioned the second Whiteline Racing Camaro well after Saturday’s action, while fifth and ninth in the two races for Jim Richards reflected the continued development underway on the still-new Shannons AMC Javelin. Charger driver Greg Crick was responsible for one of the drives of the day, as he stormed through from 17th to 7th in the first 10-lapper, progressing one spot further in the second race to grab sixth. A strong day for Paul Freestone saw him grab 8th and 7th, respectively, a strong result after qualifying 13th in his ‘69 Chevy Camaro. Brett Youlden (HQ Monaro), Cameron Tilley (Valliant Pacer), Andrew Fisher (Falcon GTHO) were others to feature in the top-10 today. The two races were filled with highly competitive racing and plenty of action – most of it clean, hard and fair.  Race one started with three cars – Karanfilovski, Gomersall and Hunter – involved in a turn one concertina on the opening lap as the field braked for the opening corner. Damage to Gomersall’s iSeek Racing Torana broke the steering and assisted his car into the path of Tilley’s Pacer at turn three, who despite being hit onto two wheels continued on to finish the race.