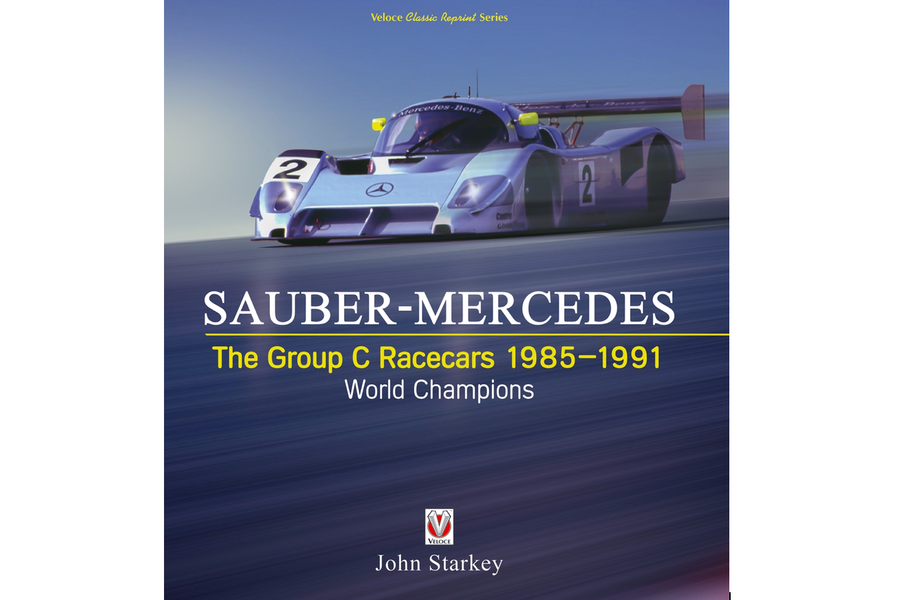 The Group C period in the 1980s and into the 1990s is oft-regarded as a golden age of sportscar racing, with cars from a variety of manufacturers competing against each other in a fuel-consumption formula that produced some great racing. For British enthusiasts it was at times hard to see beyond the lure of supporting the Jaguar team, but a growing force in the period were Sauber, who later became the official Mercedes Benz team, and their series of rapid cars.

John Starkey’s ‘Sauber-Mercedes The Group C Racers 1985-1991’ from Veloce Publishing Ltd. looks at the evolution of the team over that period, from Peter Sauber’s attractive but often frail early cars to the major force in the category they later became, winning Le Mans and championship titles. The book was first published in 2002 and it is not clear how much has been updated for this reprint, notably the list of chassis at the back of the book does not mention the C11s now active in historic racing.

I ought to mention at this point that Group C is an area close to my heart, and in fact I reported on some of the races covered in this book for various motorsport magazines. My expectations were high – but the technical information, particularly about the engine development over subsequent seasons, was in depth and interesting, and the race reports reminded me of long forgotten incidents.

There is good input from those that were there, with drivers Jochen Mass and Kenny Acheson contributing, plus team manager Dave Price, and ample illustrations, though not always the sharpest reproduction with a slight ’digitally printed’ feel about many. To be really picky, the editing could have been tighter, with pictures of an engine on following pages being captioned differently despite the photos obviously being taken just moments apart, but something slips through the net on most publications.

The 116-page book is part of the Veloce Classic Reprint series, and sensibly priced at £30 (there is a small postage and packing charge is being ordered from www.veloce.co.uk), ISBN 978-1-787114-03-6. As a look back at a classic era it was an enjoyable easy read, the Sauber story sometimes overlooked with the emphasis on the classic Porsches and Jaguars of the period.