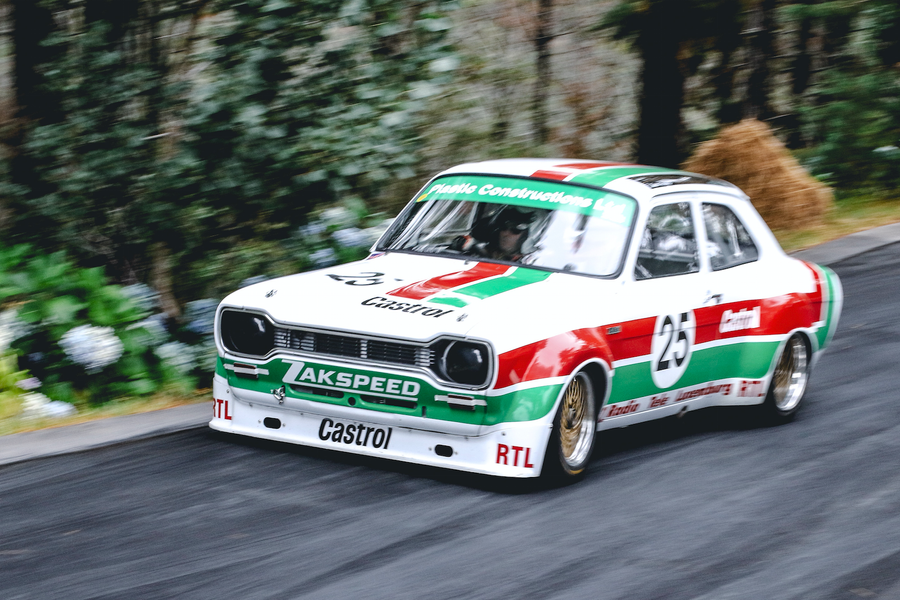 We are delighted to debut Amy Davidson as a contributor to HistoricRacingNews.com, and Amy's first piece sees her give us a unique insight in the Leadfoot Festival in her home New Zealand:

We’ve all come to know and love the Goodwood Festival of Speed in the UK. But what if you held the record there for a year, and had a few acres of lush land yourself in the Coromandel peninsula of New Zealand? Well if you’re Rod Millen, you build a sweeping driveway up your Hahei hill, past your gas station, fire station, barn, and homestead, through dense trees, ending under a tunnel at the top with stunning views out past the first-built “old barn” towards the Pacific Ocean.

Leadfoot Festival was established as a celebration of Rod Millen’s 60th birthday party in 2011 by Rod himself and wife Shelly. Family and friends worldwide were invited to drive up his hill, or to spectate dressed in period costume, with the mile-long driveway recently completed as a tribute to the tracks Millen came to love - with a Daytona camber leading into switchbacks amongst trees, parts reminiscent of Pikes Peak minus the altitude.

You may recognise the name Rod Millen from the famously mad Tacoma truck tackling Goodwood Festival of Speed sliding wildly over the course, or maybe you remember his illustrious career from Stadium Truck racing against Mickey Thompson and Ivan Stewart, to holding the Pikes Peak International Hill Climb record for 13-years (remaining the fastest all-gravel time).

Millen’s career has gained respect from racers worldwide, and at home he was a staple in establishing the NZ Mazda rotary scene, inspiring generations of Kiwi’s to restore and race rotary-powered Mazdas, changing the motorsport scene. So it was only a matter of time before Millen brought a slice of Goodwood home to NZ, and understandable why its one of New Zealand’s most successful motorsport events year after year. With the event now attracting over 10,000 spectators daily, travelling countrywide and internationally, the two days are split up by four batches of unique vehicles and consist of one practice, five qualifying runs, and three shoot outs of pre-1960 vehicles, pre-1975, and the top ten fastest.

The eighth year of Leadfoot Festival brought a variety of vehicles, from a 1915 American LaFrance Speedster that started life as a fire engine, to the brand new Pikes Peak record holding Bentley Bentayga, piloted by Millen’s son Rhys.

International drift legends displayed their skill in drift trains after batches had run, with battles showing the skills of Mad Mike Whiddett and Ken Gushi, as well as local Kiwi stars. It seemed the crowd preference for best in show would be a hard choice, but with 150 to choose from, these there were many stars including the newly restored Works Masport Escort, used by Hannu Mikkola to take victory in the in the 1979 Rally of New Zealand.

It goes without saying, the lead up to Leadfoot produces some crazy restoration work by keen competitors and exhibitors but it is the competition that counts. So…what times are we talking?

The rumour is, the goal at Leadfoot is to get under the one minute mark by the end of your first event, and whilst the times were generally decreasing, the record remained around a confident 49 seconds in the past few years, with most competitors sitting from 55-60 seconds to wind their way up.

With the previous record belonging to Alistair McRae (Colin McRae’s fabulously fast brother) it seemed to look like an even game between McRae, Millen, and local driver Sloan Cox on first glance…

On Saturday as the temps went up, the times came down. With a slightly overcast afternoon and one batch to go, Millen had near perfect conditions to give the run his best shot. Rumour has it, he not only had sneaky practice sessions throughout the year, but also managed a nap midday at the festival to get best results too. With some memorisation of the track and a few quick circles of the start line, he was off and up the hill. The trick with Millen though is the slower he looks, the faster he is, the calmer the gear changes, the quicker the record, and this time did not disappoint. With the first ever run in the 48 bracket with 48.93, he showed McRae and Cox that he still had what it takes to get a record, and left them planning tactics and memorising corners for the following day’s shoot out.

A common occurrence in countries famous for beautiful green paddocks is rain. So understandably a common occurrence for Leadfoot Festival is rain. Sunday lived up to the Leadfoot routine, and welcomed the morning runs with drizzle and a wet road, difficult to judge when the bottom section could eventually dry while the dense tree section stayed damp. It felt like Millen could easily secure the new record, and be the time to beat for 2020. But Cox and McRae sure had other ideas, with Cox midday running a 48.85 and McRae following close behind with a 48.57 - shaving a clean .36 seconds off Millen’s best.

It only allowed for their last chance, in the top 10 shoot out.

With the pre-1960 class top 10 taken out by a 1951 V8 Citroen and the pre-1975 won by Paul McCarthy in the RS1600 Zakspeed Escort replica, the top 10 quickest was a quiet time for spectators, holding their breath as their favourite rushed by, and hushing their friends to listen for the times. From what had seemed like an easy Millen mountain on Saturday afternoon, provided an outstanding and different result:

With the top ten shake up and 2019 edition coming to a close, you always wonder whether an event worth so much time and effort will keep continuing, and thankfully we got a positive answer for 2020.

Feel like seeing Rod Millen’s driveway hill climb yourself? Well you can, on the 8th and 9th of February, 2020.

We’ll see you there!