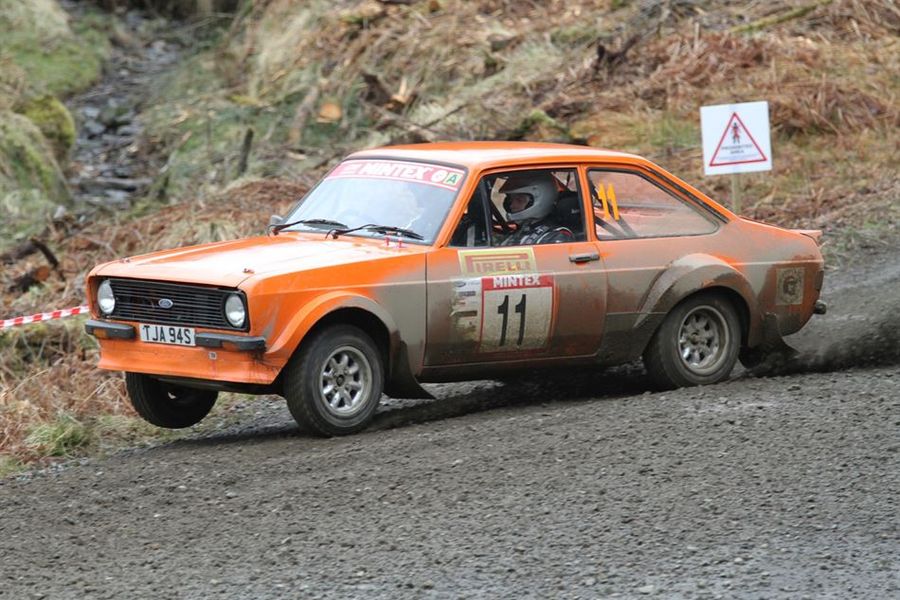 It is looking a bumper year ahead for British historic rallying with the eight-event MSA British Historic Rally Championship being joined for 2016 by the new Fuchs Lubricants R.A.C. Historic Asphalt Rally Championship. The new asphalt series is for rear-wheel drive cars from before the end of 1990, and promises to provide some dramatic action from these oversteering rally classics.
The 2016 MSA British Historic Rally Championship will feature six gravel and two asphalt rallies. The Roger Albert Clark Rally Motor Club is promoting the series under a five-year contract and 2016 will be the second year of that agreement.
The calendar builds on the success of the 2015 season and features a slightly later start as the Red Kite Stages moves back three weeks. Rally North Wales, round two in early April, will take the BHRC contenders into the outstanding Dyfi and Gartheiniog stages.
In what is sure to be a popular move with crews, the championship will return to the superb stages in South Wales for the Red Dragon Stages, a revised event from the experienced team at Port Talbot Motor Club. Asphalt events will continue to be the Harry Flatters Rally on Epynt and the Isle of Man Classicagh, while a longer gap between the Isle of Man and the season concluding Trackrod Historic Cup will make things a little easier for competitors.
In addition to the main BHRC, the competition will also include a five-round Welsh Challenge and a Northern Challenge to include the Isle of Man. The popular Clubmans Challenge will be run across the six gravel rallies for crews using no more than six tyres per rally.
“I’m very pleased with the calendar, which is an evolution of this year’s schedule,” said championship manager Colin Heppenstall. “We’re again running Welsh, Northern and Clubmans Challenges for crews who may not have the resources to contest the full season. We will shortly confirm sponsorship and TV arrangements.”
The full 2016 BHRC calendar:
Sunday 21 February: Red Kite Stages
Saturday 2 April: North Wales Stages
Saturday 30 April: Pirelli Carlisle Rally
Saturday 4 June: Severn Valley Stages
Sunday 31 July: Harry Flatters Rally
Saturday 20 August: Red Dragon Stages
Thurs-Sat 15-17 Sep: Isle of Man Classic
Fri/Sat 30 Sep/1 Oct: Trackrod Historic Cup
The new Fuchs Lubricants R.A.C. Historic Asphalt Rally Championship, which will accommodate two-wheel drive historic cars from up to the end of 1990, is also organised by the Roger Albert Clark Rally Motor Club to run alongside the Mintex MSA British Historic Rally Championship and will feature six rounds at five events.
Highlights of the schedule include a double-header round on the Isle of Man Rally Classicagh (15-17 September) and a trip to Belgium for the Salamandre Rally (23/24 April). The familiar UK asphalt venues of Epynt and Otterburn are represented by the Harry Flatters Rally (31 July) and the Cheviot Keith Knox Stages (9 October) and the programme will start with the Bovington Stages in Dorset on 5/6 March.
In addition, though it will not be a championship round, contenders will be encouraged to contest the Killarney Historic Rally (3 December) as an end-of-season party event.
Colin Heppenstall explained that the calendar includes a range of events in order to test the market in the first year of the new championship. “We’ve deliberately chosen a good spread of events, both in terms of geography and scale of rally. This will give us the opportunity to see which events enjoy the best support and that information will help shape the 2017 calendar.”
The best four scores from six rounds will count towards the championship, thus giving competitors a good choice over which events they contest.
The schedule is:
March 5/6: Bovington Stages (Dorset)
April 23/24: Salamandre Rally (Belgium)
July 31: Harry Flatters Rally (Epynt)
September 15-17: Isle of Man Rally Classicagh – double-header
October 9: Cheviot Keith Knox Stages (Otterburn)
December 3: Killarney Historic Rally (non-championship event)
Two of the events, the Harry Flatters Rally and the Isle of Man Rally Classicagh, are also rounds of the Mintex MSA British Historic Rally Championship. Crews will be able to score points towards both championships on those two events.
Heppenstall explained the thinking behind the Killarney event. "FIA and MSA rules do not allow us to include two events outside the UK, and we already have an event in Belgium in the 2016 schedule. However, we all recognise that the Killarney Historic Rally is a real highlight of the historic asphalt rallying calendar and so we are going to encourage as many of our contenders as possible to enter the rally. We think it will make a great end-of-season trip with some epic rallying followed by a fabulous party atmosphere. There will be no championship points but we will provide some awards for the highest finishing crews who are registered championship contenders."