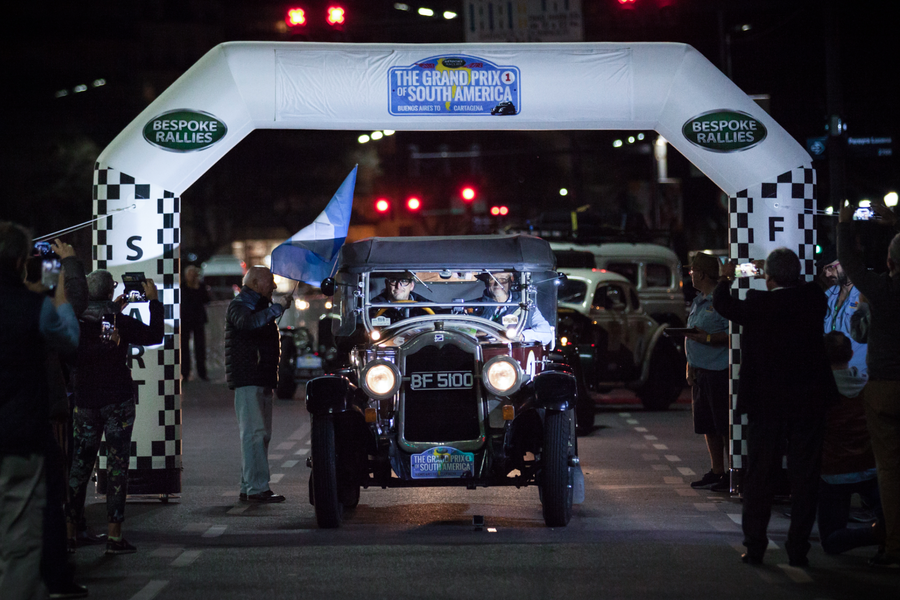 Five times World Champion Juan Manuel Fangio competed in the 1948 Grand Prix of South America, and it was 70 years later to the minute that his son Oscar recently flagged off the first contestant in the inaugural re-run of this ‘greatest ever road race’. Organised by international classic car rally specialist Bespoke Rallies, this challenging 10,000km adventure began in Buenos Aires and finished in Cartagena almost a month later, having shadowed the original route as closely as possible through Argentina, Bolivia, Peru, Ecuador and Colombia.

The winning car was the second oldest on the event, the 1929 Chrysler 75 of Andrew Davies and Paul Dilley who, despite tough opposition from the drivers of such much younger vehicles as a Triumph TR4 and pair of Ford Escort 2000s, led the event for much of the way, thanks to the notable regularity rally skills of its crew. In 2nd place was the 1972 Porsche 911 of Gerd Buehler and Armin Gottfried Knuepfing; 3rd place, the splendid 1933 Lagonda M45 of Martin Egli, Thomas Kern and Marc Buhofer; and 4th, the 1938 Chevrolet Coupe of Daniel and Rabbia Schlatter – the very type of machine in which Fangio had contested the original event all those years before.

Ever the innovators, Bespoke Rallies notched up several organisational firsts on this event, namely equipping:

Said Bespoke Rallies director John Brigden: “Considering the challenges encountered (that included some of the chosen roads being quite literally washed away) we were delighted with the outcome of this event which, due to popular demand, we now plan to run again in 2020. We were also blown away by positive reaction of the classic car fraternities within the countries visited, who gave us enormous support; as did such local authorities as the Peruvian police, who couldn’t have been more helpful.”