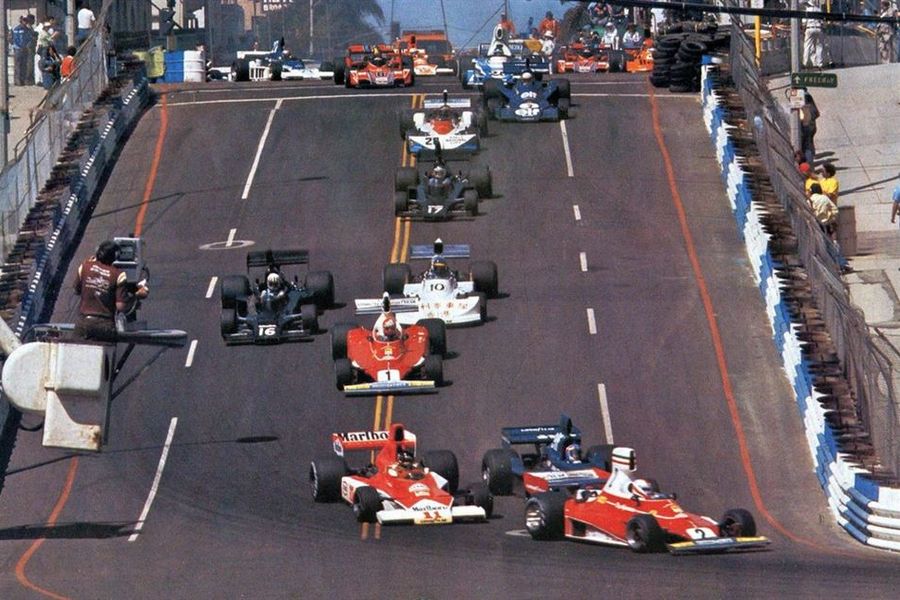 It was a Ferrari win in Long Beach for the 80-lap United States Grand Prix West – but it was Clay Regazzoni who took the win, dominating the weekend with pole and fastest lap and heading home team-mate and championship leader Niki Lauda. James Hunt went out early after a tangle with Patrick Depailler on the unforgiving street circuit, to the displeasure of the Englishman who stood on the track gesticulating at the Tyrrell driver each time he passed for several laps.

Qualifying:
With only 20-cars allowed to start the Long Beach street circuit qualifying was always going to be a dogfight for the cars at the wrong end of the timesheets. At the front, it was Saturday’s session that saw the quick times, Regazzoni taking pole as Lauda was only fourth quickest after breaking a driveshaft in that third and final session.

Depailler was on form and second overall, a second quicker tham Tyrrell team-mate Jody Scheckter, while the second row saw Hunt ahead of Lauda – and the McLaren driver’s failure to put his M23 on the front row was to have dire consequences come race day.

Down the grid the battle to qualify was dramatic, the Surtees team, who had seen Alan Jones finish second in the Race of Champions at Brands Hatch earlier in the month, this time had the Australian just scraping into the race in 19th, while Gunnar Nilsson ensured Lotus had an interest in the race with 20th and last on the grid, fine work by the team after the Swede damaged his 77 in Friday running.

Neither of the Williams cars qualified, Michael Leclere 21st and reserve, only to have his car pushed away on Sunday as everyone made it to the grid, while Jacky Ickx only ran a lap on Friday before needing a gearbox change and couldn’t get up to pace in Saturday’s one hour final showdown.

Race
It was a dramatic opening few laps that took its toll on the field. Vittorio Brambilla came together with Carlos Reutemann going into the first corner, putting both out, while Nilsson suffered a failure at the rear of his Lotus on the long back straight and hit the wall at speed, fortunately with no serious injury. Ahead of the carnage. Regazzoni was leading from Depailler and Hunt.

Hunt had initially made the better start but Depailler had got back into second as they reached the straight, and the McLaren driver was keen to get past before the lead Ferrari opened too much of a gap. On lap four he saw a gap inside the Tyrrell at the hairpin before the back straight, but Depailler claimed his line and and Hunt ended up in the barrier and out the race.

Leaping out of his McLaren an incensed Hunt enlivened his walk back to the pits by stepping out onto the track and clearly gesticulating his displeasure every time Depailler came round, and the British press loved the incident which made the front pages of certain Fleet Street editions. When the Frenchman was in the post-race press conference Hunt’s fury had not abated and he entered the room and loudly gave his opinion of the Tyrrell racer – who was profuse in his apologies saying he was distracted by a brake issue. In an ironical note – when the McLaren crew went to retrieve the car after the race they were able to drive it back to their pit, the only damage a crumpled nose…

The attrition continued with Hans Stuck retiring after a coming together with Fittipaldi, the Brazilian continuing and gaining places as others faltered in the best race to date for his new Copersucar team. John Watson lost time in his Penske as he hit the rear of Jacques Laffite’s Ligier, while Mario Andretti retired his Parnelli with cooling issues – the team’s last Grand Prix outing. In fact. Andretti only found out from a TV interviewer that the team was pulling out, but by the next morning was in talks with Colin Chapman about moving to Lotus, a move that was to pay dividends in 1978.

Lauda had got past Depailler on lap five and was easing clear of the rest, but Regazzoni was in turn increasing his gap at the front and was never threatened on his way to his fourth career win, setting fastest to complete a strong weekend. Lauda started having gearbox problems in the final laps and slowed but had enough in hand, while Depailler, who had contrived to spin from third and drop down to seventh, recovered to take the final podium position – possibly a smart choice rather than retire and face Hunt in the pits.

Lafftie was fourth, passing Jochen Mass and Jean-Pierre Jarier on consecutive laps just over half distance, while Fittpaldi claimed sixth, and his team’s first championship point, behind Mass.

Overall, a good day for Ferrari, even if it wasn’t the team number one taking the win.