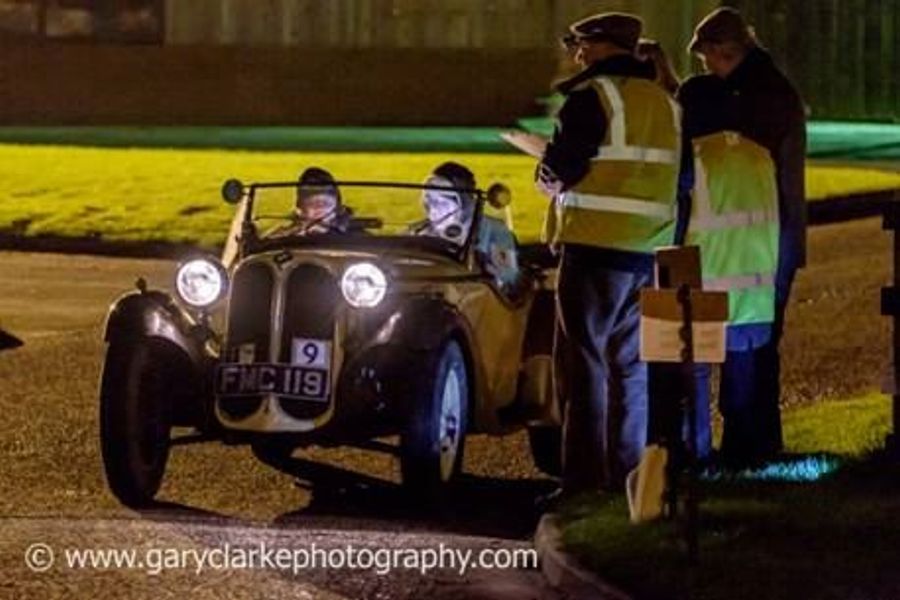 Photo: Garyclarkephotography.com
The Vintage Sports-Car Club held its Measham Rally – an event first run back  in 1950 – last weekend with an impressive ninety percent of the entry successfully completing the overnight navigational winter challenge over Saturday 16th and Sunday the 17th January.
On Saturday evening, thirty pre-war cars set off from 9.00pm onwards to take on the testing 180-mile route through North Yorkshire before returning to the welcoming start/finish venue at the Thirsk Auction Mart located to the south-west of the town from 5.30am. Conditions were not kind, competitors  having to battle through both spells of heavy localised snowfall and treacherously icy country roads through the night.
A total of thirty-two Time Controls and a further twenty-three coded Route Boards lined the route, the former manned by a team of over 70-volunteer Marshals, both VSCC members and non-members, who again proved to be the real heroes as they stood out in the elements for the duration to ensure a safe and enjoyable rally for the crews.
With the VSCC’s reigning champion navigator Annabel Jones in the passenger seat, it was little surprise to see William Ainscough atop the standings in the ‘relative’ comfort of his Frazer-Nash/BMW 319 Saloon, just a handful of points ahead of the similar 319/55 open Sports model of VSCC stalwarts, Mark Garfitt and Dood Pearce, to claim the Richard Dames-Longworth Trophy.
Competing in one of the oldest cars on the day, another leading co-driver Robert Ellis also triumphed as he guided Chris Leach home in the 1924 Alvis 12/50 Ducksback to win the Measham Trophy as the top-placed Pre-1931 Vintage finisher. It was double success for the famous Coventry-based Pre-war manufacturer as Nicholas Wright and Rob Rhodes led home the Speed Category 2 cars to win the Jeddere-Fisher Trophy in their Alvis 12/50 Tourer.
More regularly seen behind the wheel of an ERA, VSCC Hill Climb Champion, James Baxter regularly takes on the annual navigation challenge, successfully completing this year’s event in his 1929 Chrysler 70 Sports Coupe. Philip Tillyard ensured further Intermarque Trophy points for Frazer Nash, winning the Novice Class with Keith Banks in his TT Replica whilst father/son team, Ron and Matthew Birkett guided the family’s Ford Model A Trials car to victory in the Champagne Class.
The Vintage Sports-Car Club Photo Measham Rally