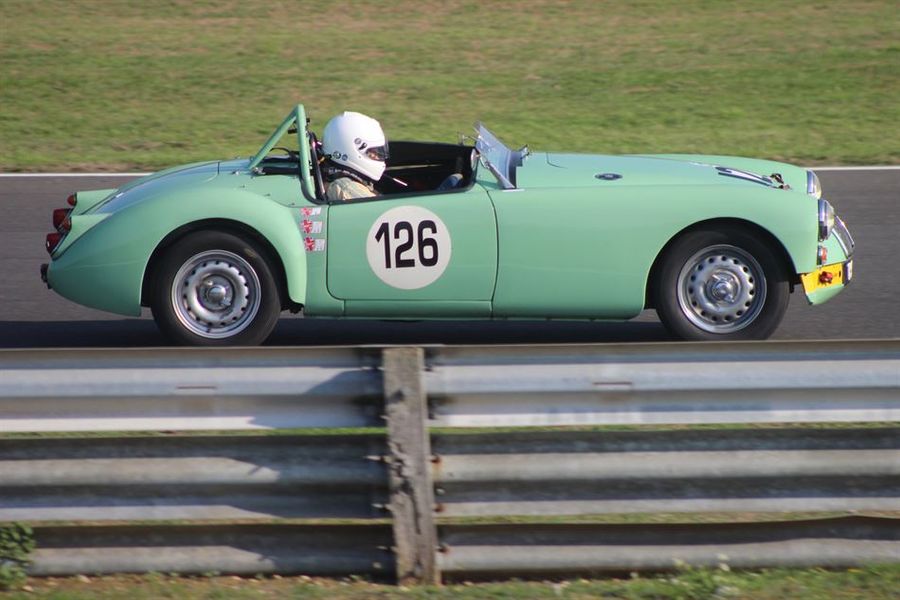 AMOC Racing put on a six race programme at Snetteron on Saturday, with some historic races  prominent in the afternoon of action

Tony Ditheridge placed his Cooper Monaco on pole for the Jack Fairman Cup race for 1950s sportscars, the large field also including the Jaguar XK and Mike Hawthorn Challenge cars. At the start Ditheridge got the little sports-racer away well, while alongside Steve Watton luridly fish-tailed his Turner before gathering it up and somehow holding onto second into the first corner.

While Watton chased hard, he could do little about the pace of the Cooper which eased away over the thirty-minute race to repeat its Snetterton win of 2017, Watton in turn clear of the Austin-Healey of Martyn Corfield. The distinctive Lister of Stephen Bond took fourth from the Jaguar MK1 of Hawthorn Challenge winner Tom Butterfield, while behind was the battle of the race.

Paul Kennelly broke free in the final laps in his Jaguar XK150 from what had been a four-car dice for sixth to claim Jaguar XK honours; fellow Jaguar racer Nigel Webb crossing the line in his MK1 for seventh, with the MGA of Graham Coles and Nick Harris’ Austin-Healey close behind, these cars running nose-to-tail through the middle part of the race.

“I was a bit exuberant off the start!” said Watton. “I wanted to try to beat Tony away but I think I was too heavy with the right foot and had to back off.”

The ever-popular Pre-War Team Challenge closed the day’s action at a sunny Snetterton, Duncan Wiltshire’s Bentley was the first car flagged away in the handicap event. Keith Piper led the early running in his Aston Martin International courtesy of a lap in hand on the field, the quicker cars working their way up the order as the race progressed.

Having been fourteen seconds behind Piper at the end of lap four, Wiltshire was past before the end of the next lap. The Aston Martin of Donington winner Peter Dubsky was working its way up the order, while running in formation were the Bentleys of Clive and James Morley, quickest in practice.

Wiltshire was sixteen seconds clear of Dubsky heading in to the final lap – and just a second and a half ahead as they crossed the line to make it a Bentley win. Behind, James Morley just claimed third ahead of his father Clive, Dubsky’s Aston Martin preventing a Bentley clean sweep.

“We are at Spa in two week’s time so the plan was to come here and just drive the car gently,” said Wiltshire. “That plan fell by the wayside very quickly and I decided to drive the nuts off the car, another 100 yards and Peter would have gone past me!”

Joining the AMOC Racing regulars at Snetterton were races for the Equipe Pre 63 and Equipe GTS fields. Having dropped to third in the early running in the Pre 63 race, Martyn Corfield had his Austin-Healey 3000 in the lead by lap eight and was in front once all the cars had cycled through their compulsory pitstops. Paul Kennelly brought his Jaguar E-Type across the line second but was adjudged to have stopped outside the pitstop window, elevating Stephen Bond’s Lister Flat Iron to second.

The MGB of Tom Smith was the pick of the Equipe GTS field, dominating the race and heading home the TVRs of Will Penrose and Mark Ashworth.