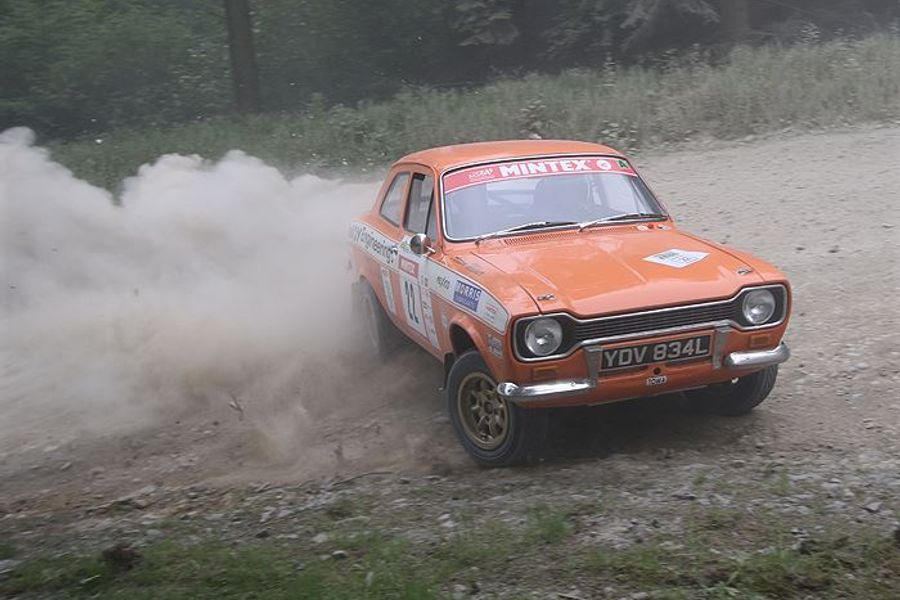 Jason Pritchard and Phil Clarke head to Yorkshire this weekend for the Trackrod Historic Cup (30th of September to the 1st of October October) with a strong chance of retaining the Mintex MSA British Historic Rally Championship title. Following a perfect score on the Isle of Man, Pritchard and Clarke only have to finish in order to secure back-to-back titles in their Ford Escort Mk2. Major rival Paul Barrett will sit at home in Northern Ireland waiting to see if Pritchard hits problems. If the defending champion fails to finish, Barrett will be champion.
After three non-finishes in a row mid-season, Pritchard battled back into contention for the title with a double victory on the Isle of Man and is now in a strong position heading for the Yorkshire forests. With class and category points, as well as bonus start points, Pritchard and Clarke will be champions simply by finishing the rally. However, Pritchard knows only too well that rallying can be full of surprises and a year ago, with the title secure, he rolled out of the Trackrod in the Dalby stage.
The Roger Albert Clark Rally Motor Club promotes the MSA BHRC under a five-year contract and 2016 is the second year of that agreement. The calendar covers six gravel and two asphalt rallies, with a double-header on the Isle of Man to make nine rounds. The team at Special Stage is filming all eight events and producing hour-long programmes to give the BHRC some of the best TV exposure in British rallying.
Pritchard and Clarke, running their Ford Escort Mk2 in the Holton Homes Category K, need to resist getting involved in a battle for victory on the rally and that could boost the chances of a landmark BHRC victory for the Fiat 131 of Matthew Robinson and Sam Collis. This is very much home ground for the project and a first win at this level is clearly within reach.
Lining up against the Fiat in the RSR Historic Engineering Category 3 are the rapid Escort Mk2s of Steve Bennett/Paul Spooner and Simon Webster/Jez Rogers. Both crews showed exceptional pace on the famous Yorkshire stages a year ago. Leading the chase of the BDG-powered cars will be the top Pinto-engined Escorts of Ben Friend/Cliff Simmons and Shawn Rayner/Declan Dear from class D3. Chris Skill and Tom Jordan will set a cracking pace in class D2 in their giant-killing 1600cc Escort Mk2.
However, the 1600cc car best placed to cause a major stir is the Escort Mk1 of Adam Milner and Roy Jarvis, back in action after crashing out of the Severn Valley Stages in June. They will be first on the road among the contenders in the Capital Construction Category 2 and will set a stunning pace on home ground despite the car’s lack of power for the fast Yorkshire stages.
Another local crew, Warren Philliskirk and Nigel Hutchinson, top the class C5 entry on their home event with category opposition from Jeremy Easson/Mike Reynolds (Datsun 240Z), Mark Tugwell/Steve Pugh (Escort Mk1), Aziz Tejpar/Alister Crook (Escort Mk1) and Terry Cree/Richard Shores (BMW 2002).
Finally, Bob Bean and Captain Thompson (Ford Lotus Cortina) and Phil Harris/Paul Kendrick (Mini Cooper) contest the Vintage Car Radiator Company Category 1. Sadly, the number of pre-1968 cars competing on gravel has now hit an all-time low due to the changes to event running order.
The Trackrod Historic Cup is based at Scampston Hall near Malton with scrutineering on Friday afternoon followed by the rally start at 7pm and one 10-mile special stage. The rally resumes at 9.30am on Saturday and the crews will return to Scampston from around 3.15pm.
Fiat 131 Ford Lotus Cortina Datsun 240Z Steve Bennett/Paul Spooner Aziz Tejpar/Alister Crook Terry Cree/Richard Shores BHRC Shawn Rayner/Declan Dear BMW 2002 Adam Milner and Roy Jarvis Jeremy Easson/Mike Reynolds Simon Webster/Jez Rogers Season Finale Yorkshire Ben Friend/Cliff Simmons Paul Barrett Warren Philliskirk and Nigel Hutchinson pre-1968 cars Mark Tugwell/Steve Pugh Mintex MSA British Historic Rally Championship Trackrod Historic Cup RSR Historic Engineering Category 3 The Roger Albert Clark Rally Motor Club Mini Cooper Matthew Robinson and Sam Collis Phil Clarke MSA BHRC Escort Mk1 Ford Escort Mk2 BHRC Season Finale Chris Skill and Tom Jordan Bob Bean Captain Thompson Jason Pritchard Phil Harris/Paul Kendrick