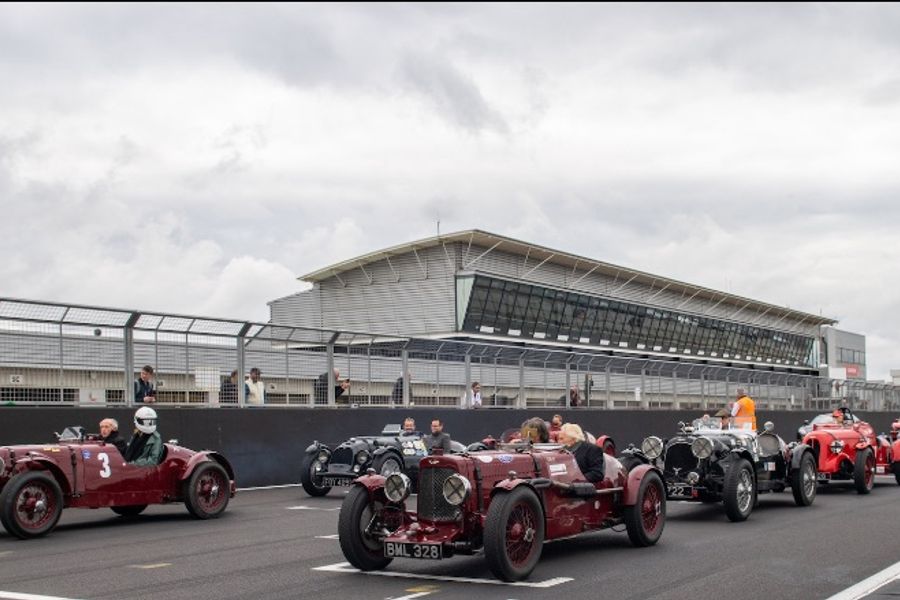 Silverstone hosted the final AMOC Racing meeting of 2019 on Saturday, October 5th, with a great day of dramatic racing rounding off with the AMOC Intermarque Championship, for so long a staple of British motorsport, titles being decided, Porsche taking the teams’ prize while James Neal and Ryan Hooker claimed the drivers’ honours.

An impressive array of cars lined up for the Pre-War Team Challenge race, with the Aston Martins on the grid also racing for the St John Horsfall Memorial Trophy. The handicap start saw the field released in six groups, some cars with one or more laps in hand, although a safety car period early in the race threw the carefully calculated handicap times up in the air.

Once racing resumed, it was the Bentley of Clive Morley at the front of the field from the Aston Martins of Robert Murray and Christopher Scott Mackirdy, these three still a lap clear of the rest. Scott Mackirdy quickly moved to the front and began to pull away, while behind the quicker cars were closing in, though some had lost out during the safety car period and were now too far back to challenge.

Lapping ten seconds a lap quicker than the lead group was James Morley’s Bentley with the Riley of Alexander Hewitson right with him, and although they were able to get past Murray on the last lap, Scott Mackirdy was able to hold on for the win, and as first Aston Martin the coveted St John Horsfall Memorial Trophy, with Clive Morley just holding off his son to take second.

“I was waiting for all these faster cars who never came!” said Scott Mackirdy. “I had trouble getting into top gear and missed the gear several times, I’ve won the St John Horsfall Trophy once before, but to win it twice is quite something, a real honour, and it was really special to have a member of the Horsfall family present it to me.”

The Team result saw a narrow victory for Bentley, who won by just two points from the Aston Martin squad. 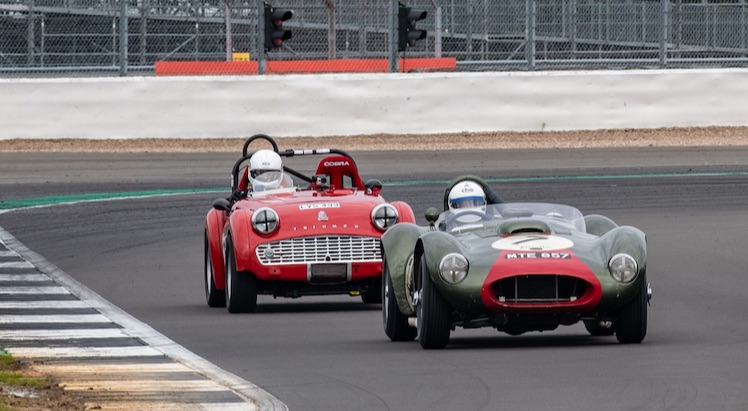 Tony Bianchi had his unique Farrallac Mk2 on pole for the Jack Fairman Cup and Innes Ireland Trophy Race, but his car moved before the start and as he stopped it the race started. To add to his woes, he was tapped into a spin in the pack on the first lap and ended up 24th, Tony Ditheridge coming round two seconds clear in his Cooper Monaco from the Cooper Bobtail of Robi Bernberg.

As Ditheridge pushed hard at the front and opened a gap, Bernberg held second from the MGA of Graham Coles, while Bianchi was charging up from the back of the field, into sixth by lap eight and closing on the cars ahead. By Lap 13 Bernberg had Bianchi right with him, but it was a battle for honour only, Bianchi carrying a ten second penalty for an out of position start.

While Bernberg and Bianchi swapped places more than once, Ditheridge kept up his impressive pace at the front and continued on to take the win. Bernberg and Bianchi crossed the line side-by-side but the penalty relegated the latter to fourth behind David Wenman’s Morgan.

“I was worried Tony Bianchi was going to come up on me in the Farrallac so I thought I better put some space behind me,” said Ditheridge. “I pushed hard at first and then just decided to keep going like that, then on the last lap it got stuck in third, and then fourth gear!”

Paul Eales was first of the Innes Ireland Cup field, with the Triumph TR4 of John Andon in second and the  gorgeous Alfa Romeo Giulietta Sprint of Jack Willmott in third.

The Aston Martin GT4 Challenge and AMOC Intermarque Championship fields combined settling the Intermarque drivers’ and teams’ titles at the end of the race. Several of the Aston Martin Vantages that had run in the GT Challenge were back in action for the GT4 element of the race, and it was David Hornsey who led from the start, but with the rapid Intermarque Nissan 200SX of Kevin Bird second heading a train of GT4 Vantages.

Hornsey opened a gap as Bird continued to head the rest, Intermarque runner Gavin Dunn’s BMW now part of the group behind the Nissan and with the Porsche of category points leader Tim Bates next up. Everything changed on lap 11 when Bates suffered an engine failure, ending his championship hopes, and laying oil down bringing out the safety car. The pit stop window had just opened and Bird and a number of others duly made their compulsory stop as the safety car emerged.

It took twelve laps behind the safety car before racing resumed and a great restart from fifth saw Chris Murphy swiftly up to third behind Becker and Bird, and then to right behind the leader on only the second lap after the field had been released. Robin Marriott took his Vantage into third with four laps to go, Murphy taking the lead at the same time to head Bird and start easing clear at the front.

Murphy held on for his first Aston Martin GT4 Challenge win, Bird heading the Intermarque runners home with a fine second place overall. Marriott was third while Dunn was fourth in his immaculate BMW E36 and second of the Intermarque field.

“The car has finally been reliable!” said Kevin Bird. “We have been out a few times with it and today it held together, we were really quick in a straight line but the Aston Martin GT4 cars were on slicks and had the advantage in the corners. It was great fun, and I love being able to race and share the car with my son.”

Once the race was over it was time for the points to be totted up for the Intermarque titles, and while Porsche took the teams’ crown, it was tight in the drivers’, the title going to Porsche pairing James Neal and Ryan Hooker, who had finished third in Intermarque in the race.

“Always nice to leave with some silverware!” said Hooker. “We knew it was going to be a close race today and we have been consistent across the season and that is what has put us in that position. We had a plan for today which worked up to a point as the safety car came out.”

“We had planned to come in early,” said Neal, “but it turned out to be one lap too early as the safety car then came out. I thought it was all over but the safety car stayed out for along time which meant everyone else had to pit as well. Ryan was then able to get past a few people and the points were close at the end – we just made it and are delighted to take the trophy.”

Making a return to racing alongside the AMOC Racing regulars for the day were the Equipe Pre’63 and Equipe GTS A fields. Richard Woolmer led early on in his Elva in the opening race of the day for the Equipe Pre’63 and GTS Class B fields, but once everyone has stopped it was the Austin-Healey 3000 MkII of Mark Holme who led, winning comfortably from the similar car of James Haxton and Jack Rawles.

The Equipe GTS A field spent more than half their race behind the safety car after an incident on the first lap, almost all the field electing to make their pit stops the moment the pit window opened with the safety car still circulating. Once free to race it was the TVR Grantura of Lee Atkins that quickly opened a gap and took the win, Tom Smith second ahead of fellow MGB racer Ollie Neaves. 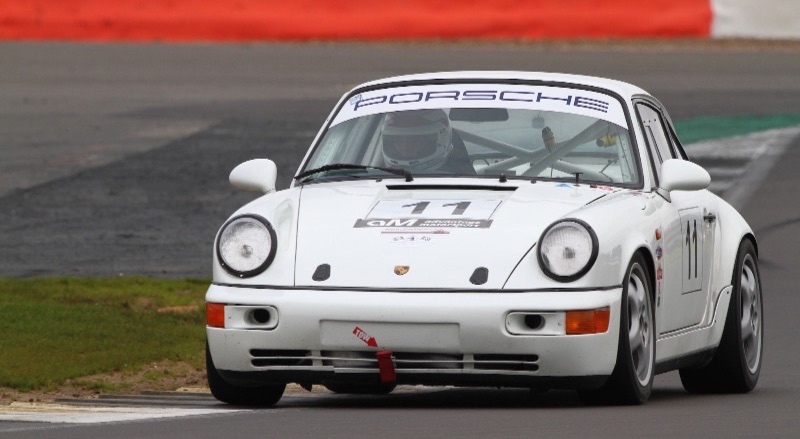