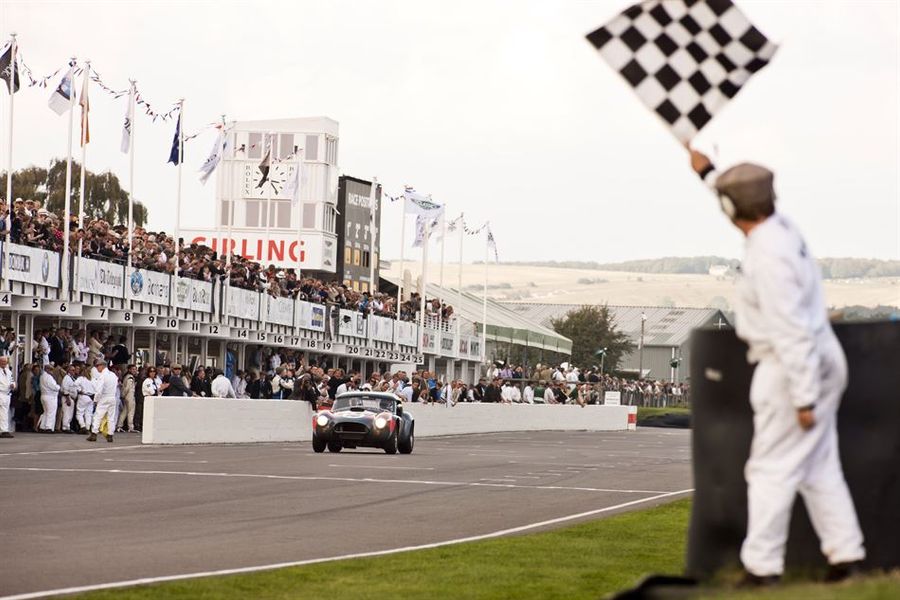 Formula 1 test driver Giedo van der Garde and David Hart provided the highlight of the final day of the 2014 Goodwood Revival as they took victory in a riveting RAC TT Celebration race in the latter’s AC Cobra. The pair, who fought off competition from £150million worth of rivals, were just one of a number of winners on Sunday as the world’s largest celebration of historic motor racing and vintage lifestyle also featured a poignant tribute to the heroes of the Second World War and, in particular, the D-Day landings.
Hart had led for the first part of the one-hour race, pitting along with most of the field when a car off at the first corner saw the safety car out just as the pit window opened. van der Garde was now in the Cobra, will Ollie Bryant right behind in a similar car. Bryant immediately put the leader under pressure, which was rewarded as van der Garde went wide at Lavant, but when Bryant's Cobra lapsed onto seven cylinders he waved van der Garde past.
van der Garde took the win, Bryant stranded trackside as his car cut out just before the end. The Maserati Tipo 151 of Derek Hill and Joe Collasacco claimed third, Matt Nicholl-Jones battling through to fourth in the E-Type he took over from Robin Liddell.
Arguably, the most exiting of the weekend’s 14 races was the second part of the St Mary’s Trophy, a giant-killing action in which the little Austin A40 of British Touring Car team boss Mike Jordan eventually saw off a pair of mighty Jaguar Mk1s. For virtually the entire 16-lap race the three could have been covered by the proverbial handkerchief, Jordan staying with the larger cars to win on aggregate, son Andrew having driven the car in part of the race on Saturday.
The racing cars were not the only ones to take to the track with over 100 military vehicles from the 1939-1945 conflict lapping the circuit on Sunday as part of a tribute headed by Lord March. It is now 75 years since the ninth Duke of Richmond aided the war effort by making what is now the Goodwood Motor Circuit available for the nation’s use. The result was RAF Westhampnett, a Spitfire base that made a massive contribution to the eventual victory.
It is not surprising that evocative Spitfire and Hurricane displays are a regular part of any Goodwood Revival’s entertainment and it is usual for them to be joined by the Battle of Britain’s Memorial Flight’s Lancaster, but with the only other example of this great, four Merlin-engined bomber currently visiting the UK from Canada, the crowds at this year’s Revival were treated to the sight of both on all three days. As Lord March pointed out, it was to such as these and the 23 D-Day veterans present, that we owe our current freedoms.