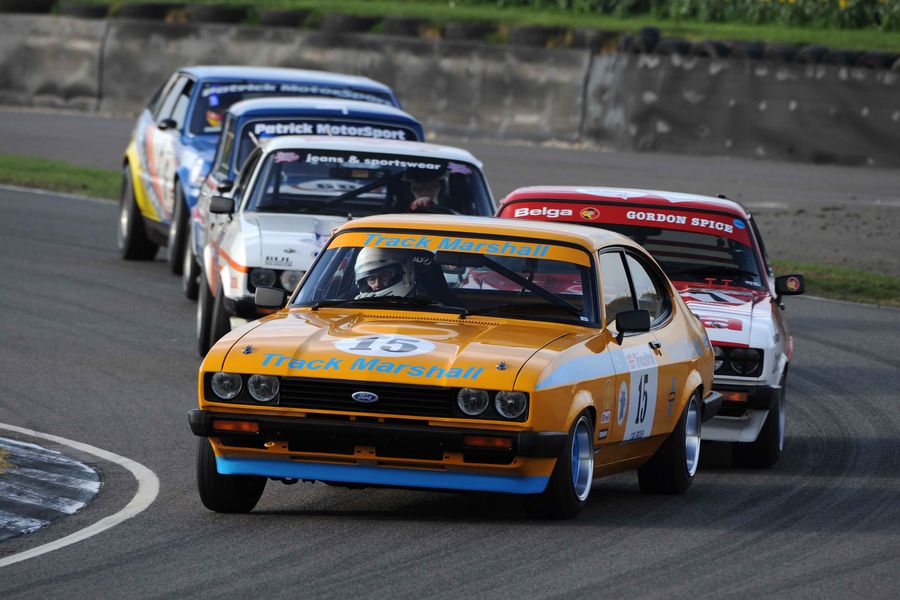 The iconic Ford Capri was a star on the road for all of its 18-year production life, and was just as popular and successful on the race track. Now for sale is a race car that can trace its provenance right back to the hugely popular saloon championships of the 1980s, as well as having now an impressive historic career at events such as the Goodwood Members’ Meeting (check out the video at the bottom of the story to see the car in the thick of a great Goodwood battle).

The car is a three-litre MkIII Capri that bears the well-known yellow and blue livery of sponsors Track Marshall, a manufacturer of tracked farm tractors who also built tanks in World War II! It is being sold by owners Graham Scarborough, Howard Dawson and Peter Ratcliff, and is on the pace in historic racing having just missed out on a podium in the Gerry Marshall Trophy at Goodwood last year. Peter recounts the story of the car with a level of detail few others could supply:

“Towards the end of 1982 experienced Capri racer, Graham ‘Skid’ Scarborough purchased the Track Marshall Group 1 Capri from Chuck Nicholson, who had raced the car in the first seven rounds of the 1981 Tricentrol British Saloon Car Championship.

“Skid used the Track Marshall Capri in Modified Saloons in 1983 and 1984 with great success, taking the championship in 1983 and winning his class in 1984. As agreed with Chuck Nicholson, Skid ran the car in Track Marshall colours in 1983. 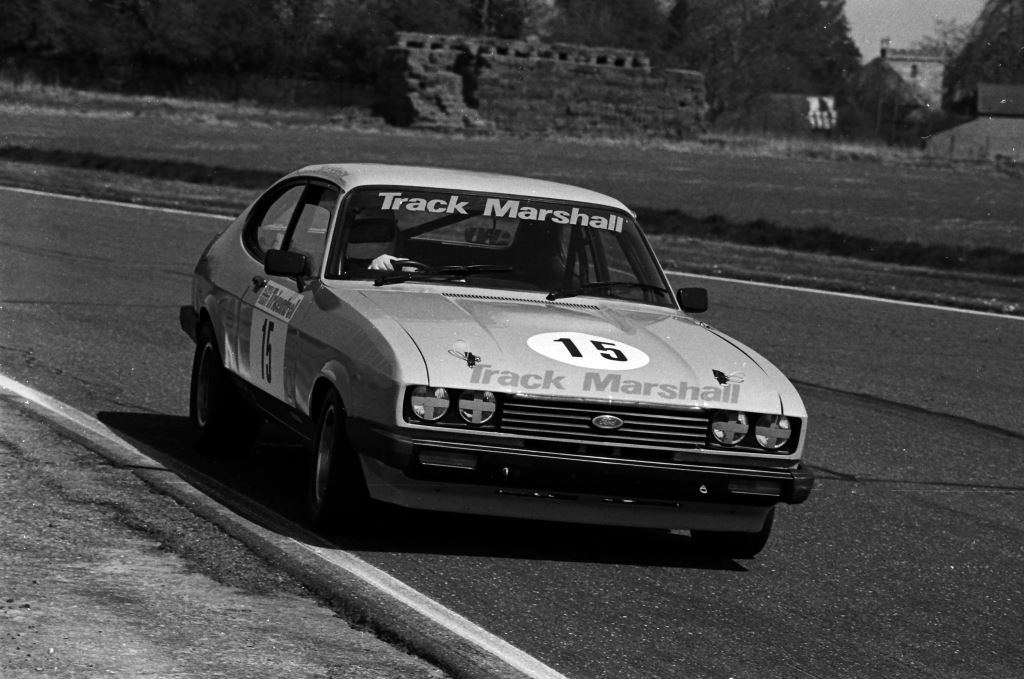 “For 1984, Skid changed the colour scheme to that of his primary sponsor, Letchworth Roofing. Although Skid had won the Modified Saloon Championship in 1983, he felt that others, including Bill Griffin, were getting closer, so for 1984 he fitted the Track Marshall Capri with lightweight bonnet, doors, tailgate and plastic windows.

“Skid sold the car in 1985 as a lightweight Modified Saloon Car. The car ran for maybe three or so races before being badly damaged in a racing incident.

“At the beginning of 1983, Skid had sold his championship winning Production Saloon Mark III Capri 3.0 litre to his main sponsor, Ken Crofton of Letchworth Roofing. Unfortunately, Ken sideswiped the bridge at Abbey in a race at Silverstone in 1983, and the car had to be rebuilt with a new shell.

“A brand-new shell was purchased from Ford and over the 1983/84 close season, the car was rebuilt by Roger Dowson. This rebuild coincided with Skid’s lightening of the Track Marshall car for Modified Saloons so the bonnet, doors, tailgate and windows from the Track Marshall car were transplanted to the newly built production car.

“At the beginning of 1985, Ken decided to sell the production car and it was purchased by Mike Scott of 96 Club, who used it as a club hire car for a season before then selling it two of his customers who used it sparingly for track days until the late 1980’s. The car was then unused for several years.

“In 1992, the Capri was purchased by Howard Dawson. Howard and Skid are old friends, going back to the early 1980’s but it wasn’t until after Howard had bought the car that he and Skid realised that it was in fact his old production car, as built by Roger Dowson in 1984. Tell-tale signs included the blue dipstick, the welded pedal set and underneath the then red paintwork, there were clear signs of the original Letchworth Roofing sponsorship that the car had run with in 1984. Howard had the car lightly restored and it was used in a couple of club races at Silverstone by both Howard and Skid.

“In 1996, Skid and Howard decided to rebuild the car for the emerging Classic Group 1 Touring Car series. Skid undertook the work on the car, rebuilding all aspects of the Capri, putting it into the correct specification and building the engine to full and correct Group 1 specification.

“Skid then drove the car at a number of events in 1996 and 1997. During 1997, Skid purchased an ex-Gerry Marshall Production Saloon, and although he continued to run Howard’s car, he rebuilt his own car to the same Group 1 specification and successfully campaigned that car, winning several Classic Group 1 Touring Car championships and making regular visits to Spa. Skid still owns the ex-Gerry Marshall car in its original Auto Plan livery.

“It is the Roger Dowson built 1984 Production Saloon that is now being offered for sale in the Track Marshall Group 1 livery from 1981. It has only ever been a race car (as opposed to a converted road car like many) and has many parts from the original Track Marshall car still fitted to it.

“It has a known lineage right back to its original build in 1983/84 and has been associated with Graham ‘Skid’ Scarborough for all but a short period of time between 1985 and 1992.  Since 1996 the car has been owned and run by Scarborough and Howard Dawson.

“In late 2013, multiple Caterham Championship winner Peter ‘Ratters’ Ratcliff joined the ownership triangle and Skid continued to run the car for Peter and Howard to drive. The CSCC Future Classics series saw some epic in-house battles in 2014, 2015 and 2016 between Peter in this car and Skid running his Auto Plan Capri.

“In late 2016 the car underwent a complete nut and bolt rebuild to be presented at the 2017 Goodwood Members Meeting as a properly specified and accurate Group 1 Ford Capri in the correct Track Marshall livery as run in the British Championship in period.

“The car has an invitation to run in the Gerry Marshall Trophy event at the 78th Goodwood Members Meeting in March 2020, which would be a great first outing for any new owner!”

If you are interested in purchasing this unique car from a classic period of saloon racing that is now able to race at a broad swathe of historic meetings, then Peter Ratcliff can be contacted via peter.ratcliff@hotmail.co.uk or on 07977 998830.