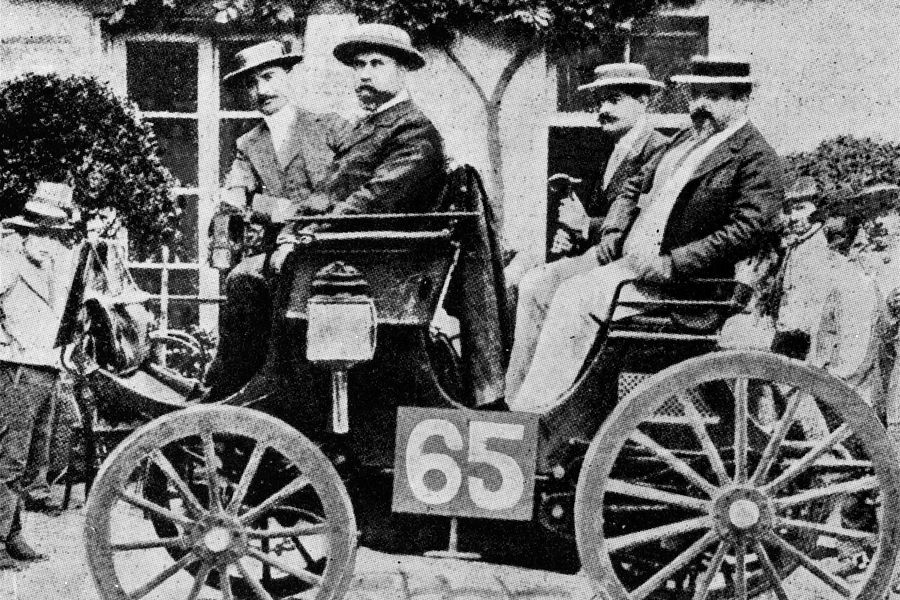 In the morning of July 22, 1894, 125 years ago to the day, 21 brave drivers lined up their vehicles on the Boulevard Maillot, right next to the Bois de Boulogne in Paris for the first ever motorsport event, and Mercedes can trace their history right back to that day.
Starting at eight o'clock, the soon-to-be racers and a number of passengers in their cars would compete in the first ever automobile race - an endurance race, held on 127 kilometres of public roads from Paris to Rouen.

Thousands of spectators came to witness the event and made the start quite a tricky affair as the roads had not been closed to the public. A report later read: "The convoy is led, flanked and pursued by numerous cyclists, also by a number of vehicles with a mechanical propulsion system which are tackling the route as amateurs."

The event was organised by the French newspaper "Le Petit Journal" and the regulations were worded in rather broad terms, promising victory to a horseless carriage that was "not dangerous, easy to drive, and cheap during the journey".

After a mid-race lunch break in Mantes, the first car arrived at the finish line at 17:40, followed in due course by 16 more vehicles that completed the race. Nine of the 17 finishers were powered by 3.5 horsepower (2.6kW), two-cylinder V-engines that had been invented by Gottlieb Daimler and were manufactured in France according to his original plans. A 5hp (3.7kW) Benz vehicle was also among the finishers of the race.

The first prize was given to the competitors ‘whose car comes closest to the ideal’ outlined in the regulations and was shared between two French car manufacturers, Panhard & Levassor and Peugeot. Both vehicles were driven by the ‘Système Daimler’ - Gottlieb Daimler's 3.5 horsepower engine.

In their verdict, the jurors emphasised Daimler's innovation: "The Daimler engine, developed by a skilled engineer from Württemberg; Mr Daimler - who was present yesterday in Rouen to share in the triumph of his work - has turned petroleum or gasoline fuel into a practical solution."

Towards the end of the 19th century, a wealthy businessman named Emil Jellinek became the best customer of Gottlieb Daimler's car company, the Daimler-Motoren-Gesellschaft (DMG). He ordered his first Daimler car in 1897 and took delivery of two more vehicles in the following year. In 1899, DMG had already supplied Jellinek with ten cars, and in 1900, with as many as 29.

Jellinek used many of the vehicles to compete in car races. In March 1899, he competed in the prestigious Nice Race Week in a Daimler ‘Phoenix’ racing car. However, he did not participate under his real name; instead, he entered the race under the pseudonym Mercédès, the first name of his eldest daughter, Mercédès Jellinek. Emil Jellinek would continue to use the pseudonym at races and the name ‘Monsieur Mercédès’ was commonly heard in motoring circles.

In April 1900, Jellinek and DMG signed an agreement for the order of new cars which were to be built to Jellinek's specifications and powered by a newly designed engine that was to be called ‘Daimler-Mercedes’. On December 22, 1900, Jellinek took delivery of the first vehicle with the new engine - a 35hp (26kW) racing car with a low centre of gravity, a lightweight but powerful engine and a honeycomb radiator, developed by DMG chief engineer Wilhelm Maybach. The car could reach top speeds of up to 90km/h and is today regarded as the first modern automobile - and the first ever Mercedes. A few months later, this new type of car won virtually every contest it competed in at the Nice Race Week 1901, making the first Mercedes a true race car. DMG began marketing cars with the Mercedes designation in 1901 and lodged the designation as a tradename on 23rd June 1902.

In the beginning of the 20th century, Grand Prix race cars used to be painted in the international auto racing colours. Those colours represented the origin of the car or the driver. British teams would compete in "British Racing Green", French vehicles were painted in "Bleu de France" and Italian teams painted their cars red. Mercedes-Benz Grand Prix race cars were traditionally painted white, representing the German origin of the brand. 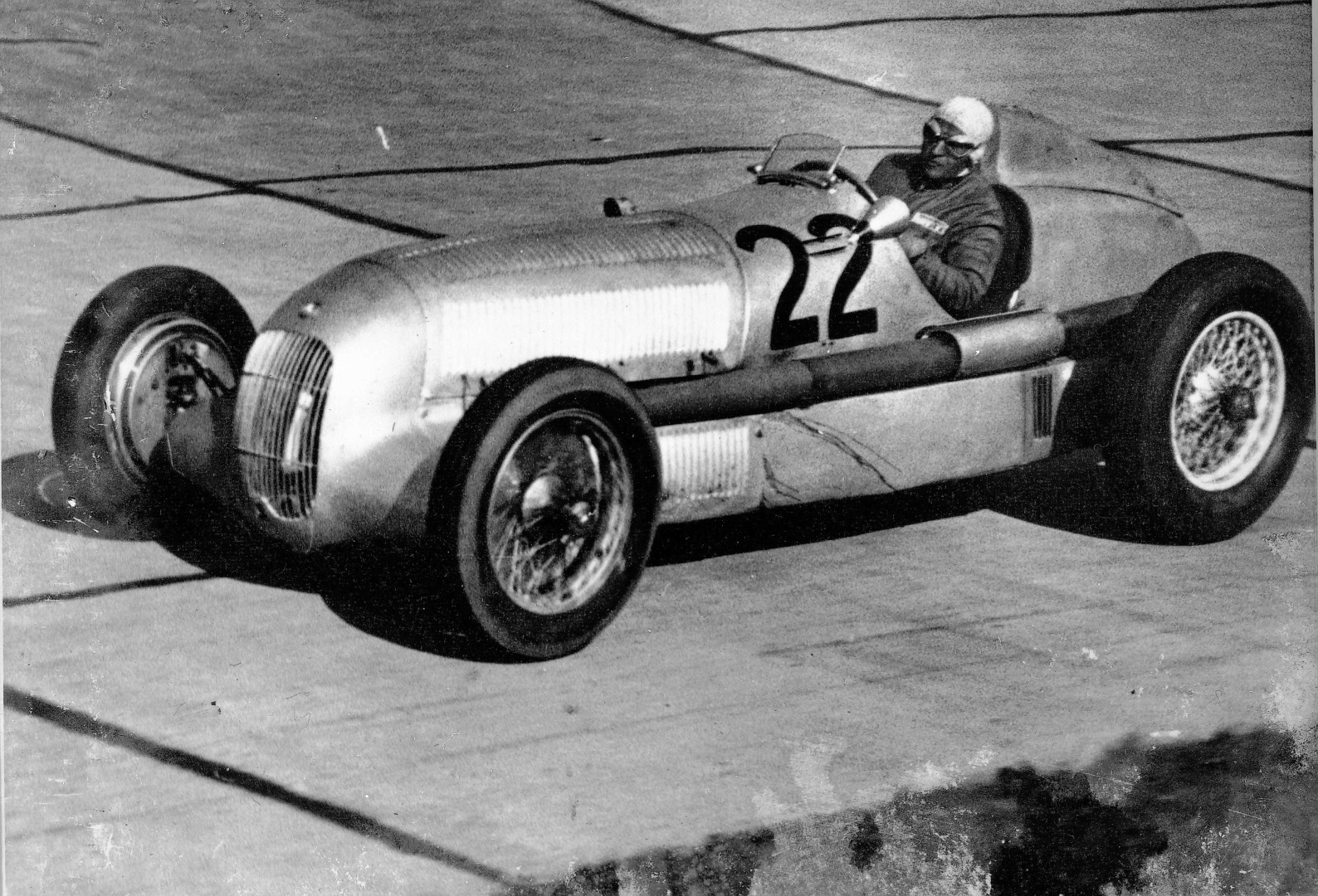 According to the legend of the Silver Arrows, this all changed in the 1930s. The Eifelrennen, held on 3 June 1934 at the Nürburgring, was the first race in which the Mercedes-Benz W25 competed. The car was a newly designed race car for the 1934 Grand Prix season, which saw the introduction of a new set of regulations that limited the total weight of the car to 750 kilograms without fuel, oil, coolant, and tyres. Apart from the maximum weight the regulations left a lot of room for innovation, not restricting the design of the car in any other way. The Mercedes-Benz W25 followed a classic vehicle architecture; the rear-wheel drive car was powered by a supercharged 3.4-litre in-line 8-cylinder engine that was mounted in the front and produced an output of 354hp (260 kW).

It was a mighty race car, but according to Silver Arrows legend there was one small issue with it: when the W25 was weighed the day before its first race, it was slightly above the weight limit of 750 kg. Allegedly, the team was able to bring the weight down to within regulatory limits by scraping off its white paint. Without the white paint, the metal bodywork of the car was exposed, giving it a silver look: the first Silver Arrow was born.

However, the W25 would not only become known for its shimmering bodywork, but also for its impressive on-track performance. Manfred von Brauchitsch won the Eifelrennen in the W25 the following day, breaking the track record with an average speed of 122.5km/h. It was the first of many wins for the Silver Arrows. The W25 would compete until 1937, the last year of the 750-kg formula. From 1934 to 1937, the vehicle design was constantly modified in the hunt for more performance. Within three years, the engine displacement increased to a maximum of 4.7 litres, raising the output to 646hp (475kW). Many famous racing drivers competed in the W25, among them Rudolf Caracciola and Luigi Fagioli.

In 1954 Mercedes-Benz made its Formula One debut. Since the start of the 20th century, the brand had built a reputation for developing strong and reliable race cars, so the expectations were high. However, entering a new racing series is never an easy thing to do - especially when you arrive a few years late to the party and renowned competitors such as Ferrari and Maserati had already won races in the series or even championships. 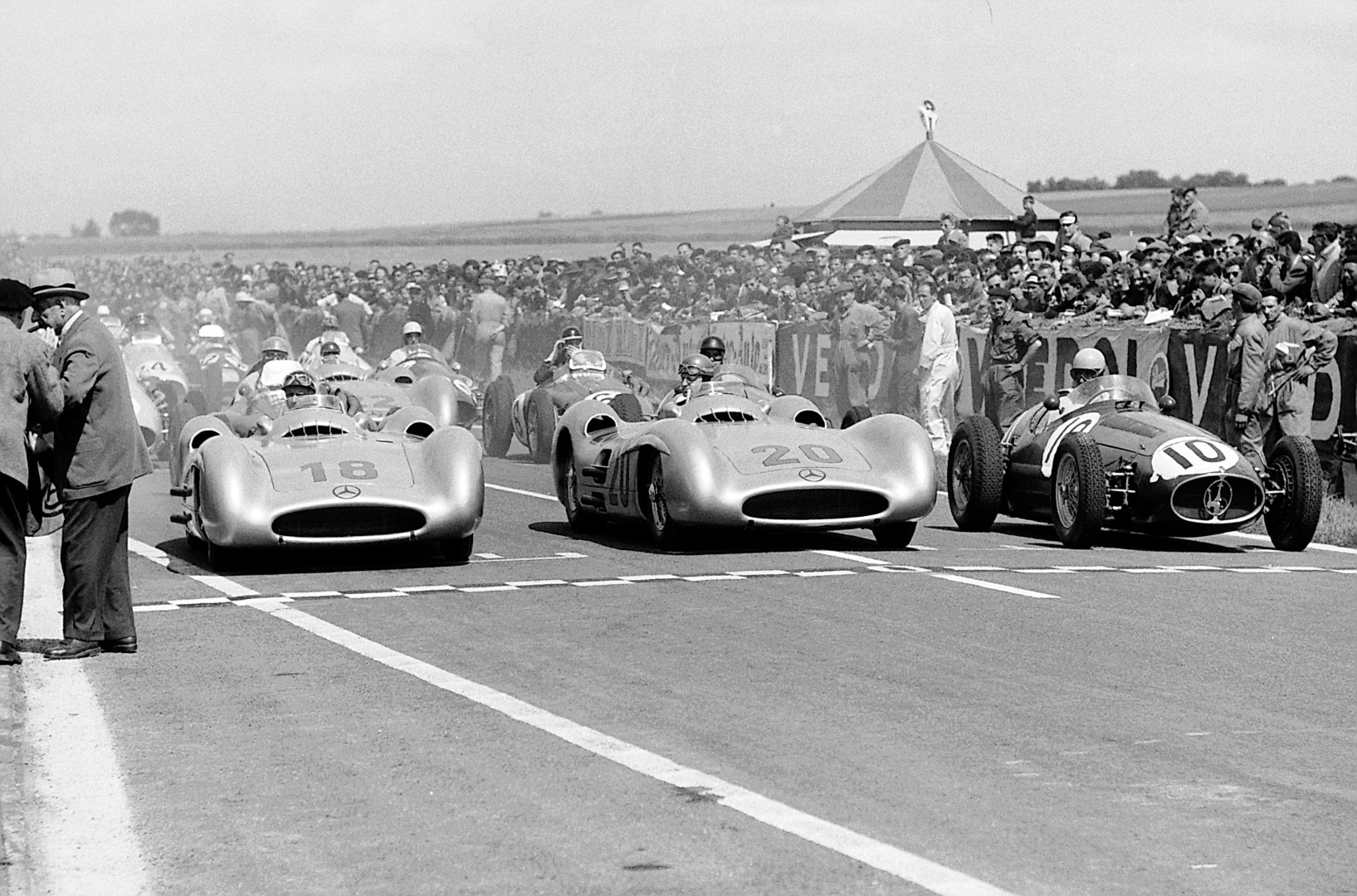 The new car had a few tricks up its sleeve though and when it was finally time to enter its first race - the French Grand Prix, held on 4th July 1954 in Reims - the W196 showed what it was capable of. In the hands of Juan Manuel Fangio, Mercedes-Benz won its first ever Formula One race.

In its early 1954 spec, the W196 was powered 2.5 litre, inline 8-cylinder engine with an output of 256hp (188kW) and came in two different body styles. There was the classic monoposto with open wheels that looked relatively similar to other Grand Prix racing cars of its time. And then there was the famous "streamliner", a car that was aerodynamically optimised to reduce drag and therefore extremely strong on circuits with few corners and long straights. Although the streamlined version has since become an icon of motorsport history, it was actually the monoposto that competed in more races.

Mercedes-Benz stayed in Formula One for two seasons and won nine out of the twelve races in which they competed. Eight of those were won by Juan Manuel Fangio who also won the World Championship in 1954 and 1955 driving the W196. In his first year, Juan Manuel Fangio raced alongside Karl Kling and Hans Herrmann, both of which claimed a podium in the season, as well as Hermann Lang. In the following year, Stirling Moss, André Simon, Piero Taruffi joined the team; with Moss being the only other driver alongside Fangio who won an F1 race in a Mercedes in the 1950s.

In 1994, 39 years after Mercedes-Benz had last competed in Formula One, the brand officially returned as an engine manufacturer for the Sauber team. The partnership was built on previous achievements racing sports cars, which saw Sauber-Mercedes win the 24 Hours of Le Mans in 1989 and the World Sports Prototype Championship in 1989 and 1990. When Sauber made its F1 debut in 1993, its Brixworth-built engine was labelled "Concept by Mercedes-Benz"; one year later the three-pointed star returned officially to the pinnacle of motorsport.

In 1995, Mercedes entered into a partnership with McLaren and won its first race in 1997. One year later, the Mercedes-powered team won the Constructors' Championship and Mika Häkkinen the Drivers' Championship - an achievement he would repeat again in 1999. The partnership with McLaren lasted until 2014 and Mercedes-Benz engines propelled a certain Lewis Hamilton not only to his first Formula One win in 2007, but also to his first world championship in the following year. In his entire Formula One career, Lewis has made every one of his 239 race starts with Mercedes-Benz power.

2019 is the tenth season for Mercedes as a modern-day works team in Formula One, having first raced in 2010, the team name providing a continuity with those earliest days of motorsport. 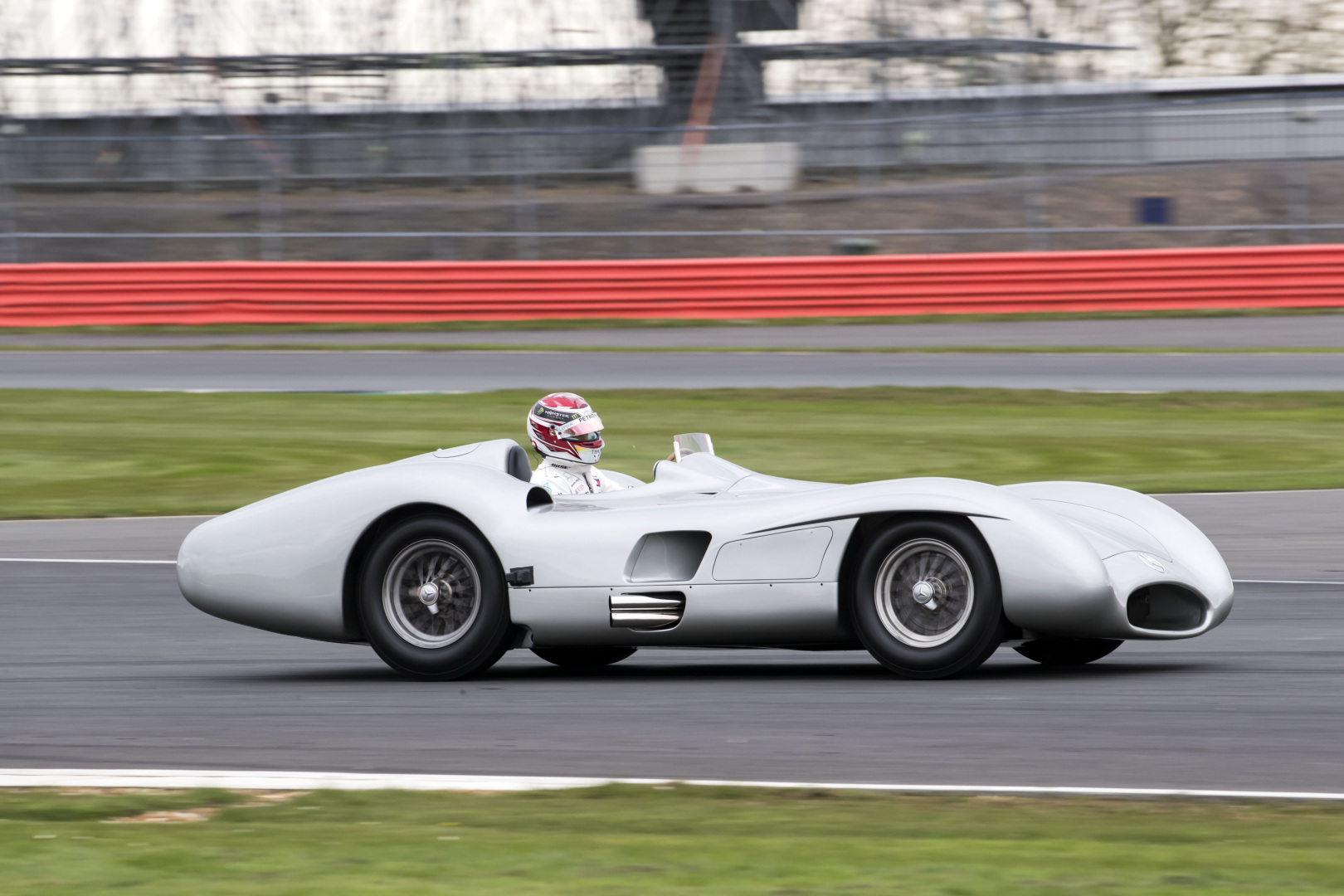