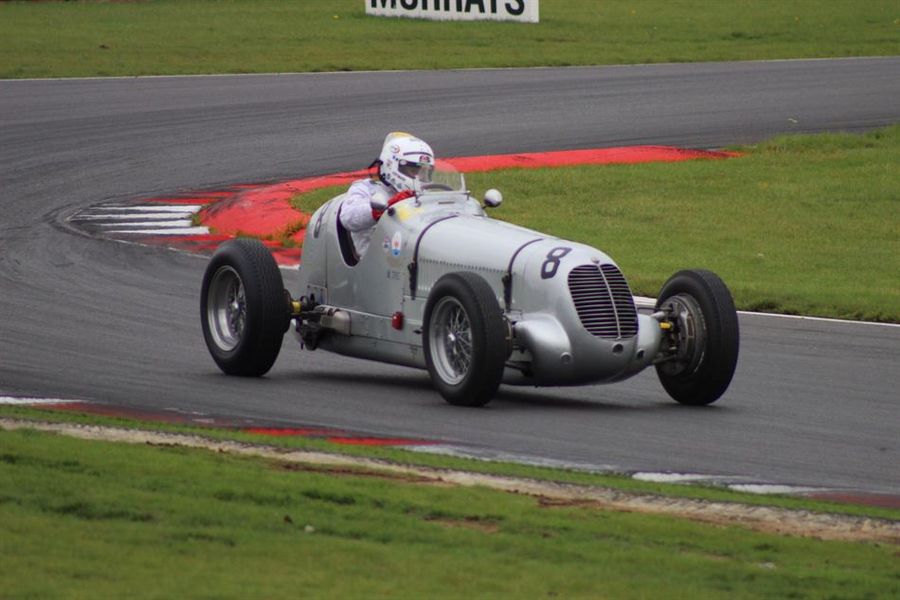 The Vintage Sports-Car Club’s 2016 race season starts at Silverstone with their ‘Spring Start’ meeting on Saturday 23rd of April, where the club will welcome HRH Prince Michael of Kent, a familiar face at the venue as a member of the British Racing Drivers’ Club, who will present the awards for the day’s special ‘Stanley Mann Cup’.
Over 300-cars are currently entered for the 11-race programme, and the GP Itala Trophies feature a number of the club’s most prominent silverware, including the collection’s namesake GP Itala Trophy Race for pre-1931 Vintage Racing Cars, a part of the VSCC’s first meeting at Silverstone in 1949, which will also feature a special Bentley class for the  Stanley Mann Cup.
The Amschel Rothschild and Patrick Lindsay Memorial Trophies Race for Pre-1961 Racing Cars will again bring together the pinnacle of Grand Prix, Formula 2 and Voiturette racing machinery of the immediate pre- and post-war eras, whilst the Fox & Nicholl and Silverstone Trophy Races accommodate both original and more modified road-going pre-war Sports-Cars.
As ever, pre-war fans will also enjoy the most eclectic full grids competing in the ever-popular All-Comers Pre-war Short Scratch and Handicap formats.
The VSCC’s 2016 race season will also see a host of invited grids as part of each race day, with a number of clubs and series scheduled to take part; this year’s ‘Spring Start’ see the HGPCA Pre-1966 Grand Prix Cars, the AR Motorsport Morgan Challenge, and the FISCAR Tom Cole Trophy, celebrating the career of the 1950’s Allard and Ferrari driver, who suffered a fatal accident at Le Mans in 1953 in his Ferrari 340 MM Spyder.
Also scheduled is a Frazer Nash race, which will see a capacity grid of both pre- and post-war cars from the popular British marque whilst the day also includes an ever-popular grid of 1950s Sports and Sports Racing cars.
There is free paddock and grandstand, a mouth-watering display from world-renowned auction house and club Principal Associates Bonhams, onsite catering facilities and a busy trade Village.
With ‘Spring Start’ coinciding with both the Queen’s 90th birthday and St George's Day this year, the circuit will be leading the celebrations with a special afternoon tea. Further enhancing the nostalgic festival atmosphere of this year’s event plus a children’s entertainment area to keep our younger enthusiasts occupied, including a bouncy castle and face-painting.
Yet another attraction will be the VSCC’s first ever AutoSolo at Silverstone. Taking place on one of the venue’s tarmac car parks, this simple ‘Driving Tests’ competition for pre-war cars will provide plenty of entertainment during the morning’s practice sessions, finishing ahead of the scheduled lunch break before the racing action begins.
Vintage Sports-Car Club ‘Stanley Mann Cup’ HRH Prince Michael of Kent British Racing Drivers’ Club Silverstone ‘Spring Start’