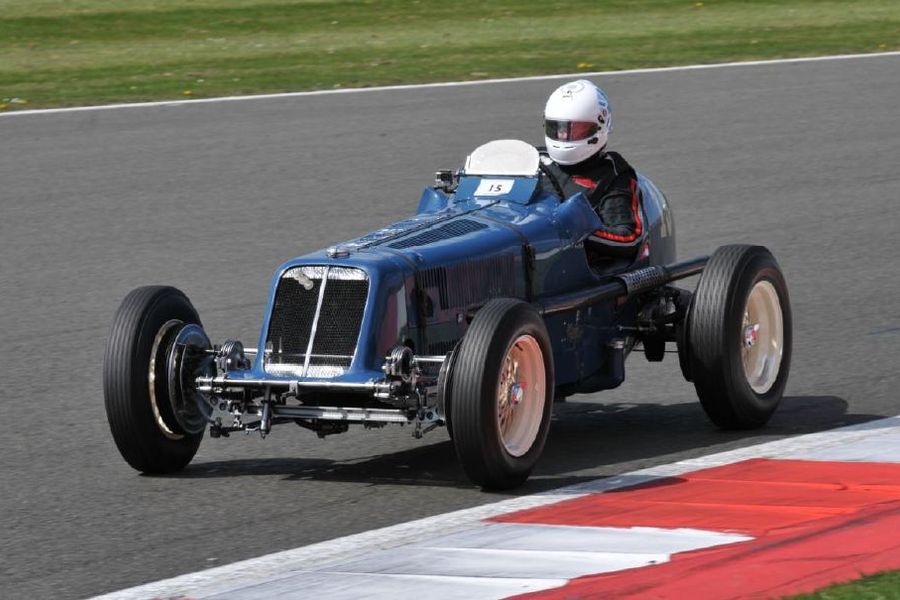 The Vintage Sports-Car Club started their 2015 circuit racing season with their annual ‘Spring Start’ race meeting at Silverstone on Saturday 18 April, with some fine racing in front of an estimated crowd of over two thousand spectator's for the afternoon’s entertaining 11-race programme.

As is the general custom, many used the morning practice sessions to explore the many other attractions away from the track, including another fine display of cars from world-renowned Auction house and Club Associate, Bonhams, including the famed ex-Works Aston Martin Ulster ‘LM19’, the expected headline lot of their Festival of Speed Sale at Goodwood in June, whilst the ever-popular Trade Village also drew plenty of interest. A wander through both the Competitor Paddock and Spectator Pre-war Car Park proved a spectacle in itself with many commenting it was the most impressive atmosphere in years.

During the Lunch Break, there was a small presentation in the Paddock as the original Stork Mascot that had sat atop one of the Club’s annual trophies for over 50 years was returned to its owner, a splendid 1919 Hispano-Suiza H6B Tourer also on display throughout the day.

A packed schedule for the afternoon’s Race Programme meant the action came thick and fast. It fell to the Regularity Trial to again start proceedings, boasting another fine array of road-going Pre-war Sports-Cars; over a half of the field ‘qualified’ by completing their required laps in the allotted 30 minutes, including 19-year old George Parkinson, making his VSCC Racing debut in his Rosengart LR2 Torpedo. This was quickly followed by the first of two ever-popular Pre-war Allcomers Short Handicap races, won by John Earle Marsh in his Alvis Silver Eagle.

The day’s third race saw the highly-anticipated debut of the Club’s new Premier Cru Racing series of races. A busy start to the Historic Season had resulted in a smaller grid than hoped, with several cars ‘hors de combat’ although promises of joining the fun later in the season. The quality that remained, however, was not in question, with stunning examples from revered ERA, Maserati, Bugatti and Talbot on show. A tight Qualifying Practice resulted in less than 0.8 secs separating the top three on the grid, with Mac Hulbert’s famed ERA R4D on pole in the hands of James Baxter, ahead of the sister R4A of Nick Topliss in third, the pair split by the ever competitive Calum Lockie in Sean Danaher’s Maserati 6CM.

To the race and a lightening start for Topliss saw him take a slender lead into the first corner at Copse. The battle behind continued throughout the first lap before an incident at Brooklands; trailing the two ERAs, Lockie made an ambitious attempt to take both down the inside on braking but loss of grip and a subsequent spin took him into the path of the unfortunate Baxter, the contact leaving them both out of the running, and releasing Topliss to lead to a dominant victory.

An issue with his supercharger halted a strong display by Duncan Ricketts in the ERA E-Type, retiring from second place on Lap 12, promoting the ERA R12C of Terry Crabb and Sean Danaher in the Maserati 8CM, whose contest was undoubtedly providing the best action of the race. With two laps to go, the ERA finally broke the efforts of his Italian rival to take a worthy second place. Richard Pilkington was next home, besting Hudson’s Type 35 Bugatti – the sole Vintage survivor – for 2-seater honours, whilst Julian Wilton was a definite people’s champion, successfully completing his first ever race in ERA R7B.

A long journey trailering his Riley Special to Silverstone from Fife was made all the more worthwhile for Durward Lawson, as he led home a competitive Silverstone Trophy Race for Special Pre-war Sports-Cars for an impressive first Trophy victory, just ahead of the ever-exuberant GN/Ford ‘Piglet’ of Longstone Tyres chief, Dougal Cawley, and Ewen Getley’s Bentley. Late entrant for FISCAR's now annual George Abecassis Trophy, Matt Grist gave a barn-storming performance in HWM Jaguar ‘HWM 1’ to win from the back of the grid, ahead of an elated Jonathan Abecassis, doing the family proud with second place in his grandfather’s Austin Healey, and third place Andrew Smith in the Aston Martin DB2. Grist was unable to repeat the win in the day’s later race for 1950s Sports Racing cars, with Mark Lewis dominant in his mighty Lister Knobbly.

Another capacity grid for the day’s second Handicap Race of the day proved another entertaining show, with William Elbourn celebrating his 23rd Birthday in style, with victory in his Riley 12/4 Special.

Ever the headline, the Race for Pre-1961 Racing Cars proved another breath-taking spectacle; celebrating the 30th Anniversary of the Patrick Lindsay Trophy, Duncan Ricketts ended ERA’s 15-year stranglehold on the silverware, bringing David Baldock’s stunning Alta home as the first Pre-war finisher. Meanwhile, an epic four-way tussle ensued at the front of the race for the Post-war Amschel Rothschild Trophy spoils; Fred Harper overcame a problematic morning practice, eventually forcing the powerful Kurtis Indy-Roadster to the front on lap 5 and on to a hard-fought victory. Behind, the Lotus 16 of Marshall Bailey and Connaught pairing of Michael Steele (C Type) and Simon Diffey (John Morley’s B Type) continued to trade places throughout, with the additional challenge of lapping back-markers adding plenty of extra excitement, the Lotus coming out on top ahead of the younger C Type.

An unfortunate coming together between the Frazer Nash of Douglas Monro and David Ozanne’s Aston Martin brought a swift end to the first instalment of the Fox & Nicholl Trophy Race on lap 3. With the two machines locked together and immovable from the middle of the track, the sensible decision to show the Red Flag was taken – happily the drivers were unharmed. Moved to the end of the day, the race was re-started with cars gridded on their finishing positions of the first part, with several cars unable to rejoin proceedings with the change schedule. A short, sharp three laps followed, inevitably led home by perennial challengers in the HRGs of Will Mahany and Andrew Mitchell, the former’s Le Mans the winner by less than half a second. Richard Pilkington’s Talbot scored a popular third place finish and his sixth win of the famous named trophy for larger capacity cars. Julian Grimwade started his season and he ended his last, taking a commanding victory in the day’s only Pre-war Allcomers Scratch Race in the Frazer Nash Norris Special after electrics issues earlier in the day.