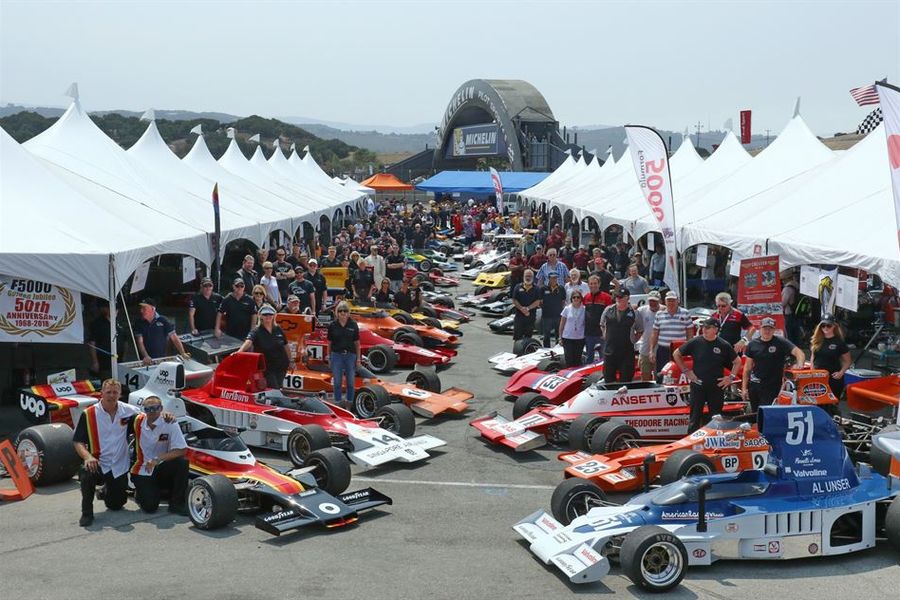 After 10th and 7th place finishes in the two F5000 category races at the Pre-Reunion meeting the weekend before, and third behind Bennett and SAS Autoparts MSC Series young gun Michael Collins (McRae GM1) from Christchurch in the Bonham Cup prelim race on Saturday Higgins appeared to be just getting into his stride.

Yet as he was surrounded by well-wishers after the Rolex race the Auckland ace was happier talking about the response from officials, fans and fellow historic motor racing aficionados to the decision by the NZ F5000 Association to organise the trip to the two meetings to help their American counterparts celebrate the 50th anniversary of the stock-block 5 litre V8-engined ‘wings-and-slicks’ F5000 category.

‘I know for a fact – because they came up and told me directly – that a lot of the people here really appreciated Stu (Lush), Geoff (Harper) and I bringing our ex Danny Ongais car back to race here. And from what other guys are saying it’s been the same with them,“ Higgins said. “People here really seem to appreciate the effort we have all put in to get here.”

Fellow driver, and the administrator of the US-based Formula 5000 Register, Seb Coppola, concurred, saying at the conclusion of racing on Sunday that; ‘we have certainly appreciated our Kiwi and Aussie cousins bringing their cars here to help us celebrate such an auspicious occasion as the 50th anniversary of our category at this iconic facility.”

Sunday’s 14-lap feature race ran very much to script, with Pre-Reunion meeting pace-setter and Saturday Bonhams race winner Craig Bennett from Milford, Michigan, behind the wheel of  his unique Dodge-engined Shadow DN06 getting an early jump off pole position then sprinting away to a lead he then managed to the chequered flag. With Michael Collins (McRae GM1) out with an engine issue Andy Higgins slotted his Lola T332 into second where he, in turn, stayed for the rest of the race.

UK-based SAS Autoparts MSC series regular Greg Thornton (Chevron B24) was also part of this group early on, having finished Saturday’s prelim in fourth place, but was forced out on lap 9 with a broken input shaft.

Evergreen series veteran Ken Smith (Lola T332) was forced to sit out the Pre-Reunion races with a virus, but was back to his best for the Reunion meeting itself. The lack of track time showed in Sunday’s Rolex race, however, where  a gamble on car set-up backfired and Smith was left struggling with a lack of grip. A strong fifth place in the Bonhams preliminary race on Saturday should have parlayed into a possible podium on Sunday; instead the just-turned 77-year-old from Auckland was shuffled back to seventh.

Like Andy Higgins – who won a special Bonhams Cup award for the driver (in this case in the F5000 category) who ‘best exemplified the spirit of the event’ – fellow Aucklander Grant Martin enjoyed a competitive and largely trouble-free run at both the Pre-Reunion and Reunion meetings, with a best finish over the weekend of sixth place on Sunday, but was happier talking about the meeting itself.

“It’s been seriously cool,’ he said. “Billionaires can and do spend millions buying cars to run at this meeting yet here we are a bunch of blokes in black T-Shirts from West Auckland out there mixing it with them. It’s been fantastic and once we got a direction on car set-up we were away.”

Like Martin it was a second time at the iconic Laguna Seca track for Dunedin driver Steve Ross, the pair having shipped their cars up for a meeting in 2014. Despite knowing which way the track went, Ross admits it remains a daunting place to race, and not just because of the stomach-churning drop down the infamous ‘Corkscrew’ turn three-quarters of the way around.

“We just don’t have anything like it at home, or even in Australia for that matter,” he said. “Back home most of our tracks are pretty flat and I can’t think of one that has any blind crests.

“Here you’ve got a serious climb plus a couple of blind crests going up the hill and even the corner as you drop down the start/finish straight is blind. I’ll tell you what you’ve got to have your wits about you here, particularly with 30-plus cars and a huge speed differential between the fastest and slowest.”

Having cast such a shadow over the racing scene in the US, the UK and Europe as well as in Australia and New Zealand it was no surprise that some famous names from the various F5000 series of 40-50 years ago made a point this year of attending the annual Rolex meeting.

Included in that number were category originals Derek Bell and David Hobbs from The UK, Kevin Bartlett from Australia, and both David Oxton and - of course - Ken Smith from New Zealand.