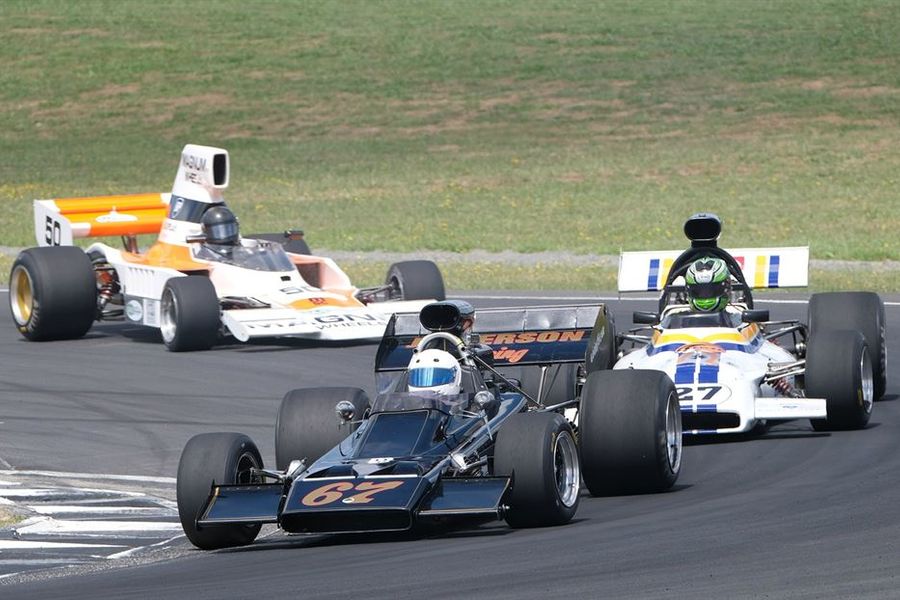 Andy Higgins (Lola T332) is the 2017/18 SAS Autoparts MSC NZ F5000 Tasman Cup Revival Series champion, the Aucklander wrapping up his second series title at the final round at the annual Phillip Island Classic meeting in Australia over the March 10th/11th weekend.

Since selling that car he has raced a variety of other historic single-seaters before returning to the SAS Autoparts MSC series this season in partnership with car owner Stu Lush, and engine builder Geoff Harper of HLR Racing, in a Lola T332.

Like Higgins and his father, competing in - indeed helping run – the SAS Autoparts MSC NZ F5000 Tasman Cup Revival Series is very much a family affair for Burson – who shares his passion for the category, and the cars of compatriot Graham McRae, with his father, Peter Burson.

Peter also competes in the series in a McRae GM1, this season finishing 15th overall.

Third, despite missing the final round at Phillip Island to attend a family wedding, was category young gun Michael Collins who enjoyed a dream debut behind the wheel of Alistair Hey’s McRae GM1.

The 21-year-old from Christchurch, who in 2017 won both the South Island and NZ Class 2 Formula Ford titles, was immediately on the pace at the opening round of this season’s SAS Autoparts MSC F5000 series, battling for the lead at the first round. He then claimed his first race win at the second before winning all three class races at his home round at the annual Skope Classic meeting in Christchurch in February.

Defending SAS Autoparts MSC series title holder Brett Willis (Lola T330) from Rotorua had an up and down season but held on to claim fourth place this time around.

Making a big impression wherever he went, meanwhile, was runaway Class A (for earlier series’ cars) winner David Arrowsmith from Christchurch who finished fifth overall

Driving the only Ford-powered car in the SAS Autoparts MSC field, a Boss 302-engined Lotus 70, Arrowsmith spent the season redefining just how quick one of the earlier model F5000 cars can be driven.

And what of category stalwart Ken Smith, the 76-year-old super-vet contesting his 60th consecutive year of national level motor racing?

After a heavy crash in a borrowed car (after problems with his own) at the opening round at Pukekohe in November, Smith dominated his own ‘home’ round at Hampton Downs in January but was forced to sit out the final at Phillip Island after an engine issue at the penultimate round in Christchurch.

The result was 12th overall in the season points standings.

With 2017/18 done and dusted the focus of key SAS Autoparts MSC series regulars now turns to the big 50th Anniversary of the  F5000 category race meeting at the Rolex Monterey Motorsports Reunion meeting at Laguna Seca in northern California in August.

As many as 14 Kiwis are expected to line up alongside fellow category drivers from the United States, Canada, the UK and Australia in the 51-strong field.