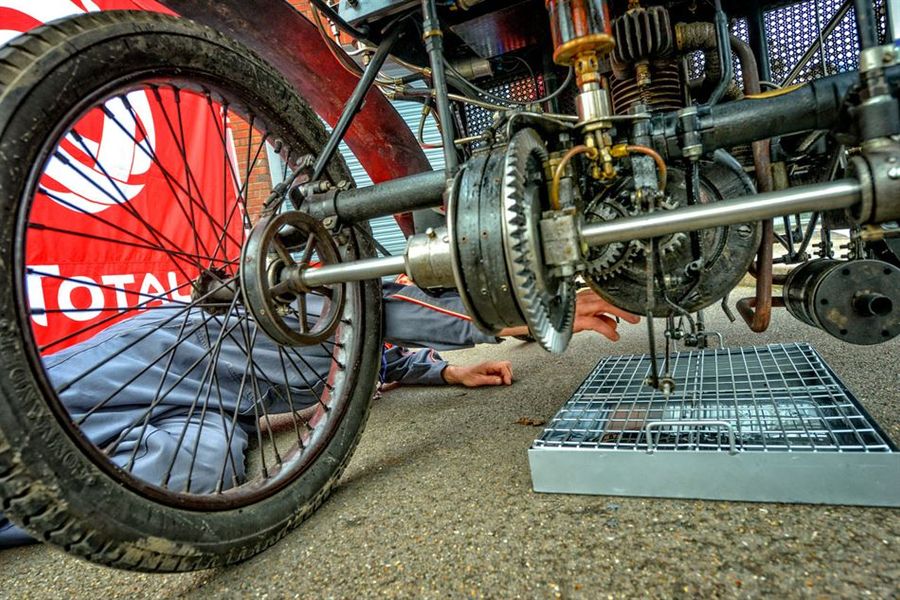 Pioneering automobiles from the 19th century and their intrepid crews will benefit from Formula 1 technology as leading oil and gas company Total becomes a long term Official Lubricant Supplier to the famous Bonhams London to Brighton Veteran Car Run supported by Hiscox.
Total first became involved in the Royal Automobile Club event last year and has now signed a three-year agreement which will see the company’s involvement expand to offering not just lubricants to participants but also a full mobile welding service to compliment the work of the RAC Motoring Services patrols.
Marc Smith, General Manager at Total UK, Lubricants Division, said: “Total has been catering to the needs and specifications of generations of engines from the 1920s right up to multiple F1 world championship winning cars and Aston Martin Racing. We are delighted to be supporting the Run for the second year in a row and to strengthen our link with the veteran car community.
“It is amazing that these cars are still running and with our expertise and technology applied to oils and lubricants, we are working to ensure their engines perform as well as – or even better than – they did when new, more than 110 years ago!"
With experts on hand to talk about how modern oil technology is vital to the longevity of veteran engines, Total will be at the start of the Run in Hyde Park and will provide two oil stations en route, at the Honda Redhill assist point and the Harrods stop at Crawley, the official half way point.
Total has teamed up with leading restorers, Classic Motor Cars of Bridgnorth to provide the mobile welding unit. This is the first time that such a specialised service has been offered to participants in trouble.
“As usual, patrols from RAC Motoring Services will be providing help to those who break down, but sometimes these unique vehicles demand specialist help and we are delighted to be able to offer this service thanks to Total and CMC,” said Ben Cussons, Chairman of the Veteran Car Run Steering Group Committee.
This year’s Run marks the 120th anniversary of the first ‘Emancipation Run’ from London to Brighton, which was held in November 1896. It marked the passing into law of the Locomotives on the Highway Act which raised the speed limit for ‘light locomotives’ from 4mph to 14mph and abolished the need for the vehicles to be preceded by a man carrying a red flag.
As tradition dictates, the Run – which has been organised by the Royal Automobile Club since 1930 – will take place on the first Sunday on November, which this year falls on the 6th. More than 400 three- and four-wheelers – all built before 1905 – will take part in the Run.
The Run is just one element of the Royal Automobile Club’s London Motor Week – a seven-day celebration of motoring, which includes an art exhibition, motoring heritage lectures, a motoring forum and a motoring books awards evening. The penultimate event in the week is the free-to-view Regent Street Motor Show, on Saturday 5th November, which turns London’s premier shopping street into a motoring showcase that puts the spotlight on veterans and moderns alike. Then just before 7am on Sunday 6th of November the Club’s premier event, the 120th anniversary Bonhams London to Brighton Veteran Run supported by Hiscox, gets underway.
Total as Official Lubricant Supplier London to Brighton Run Total