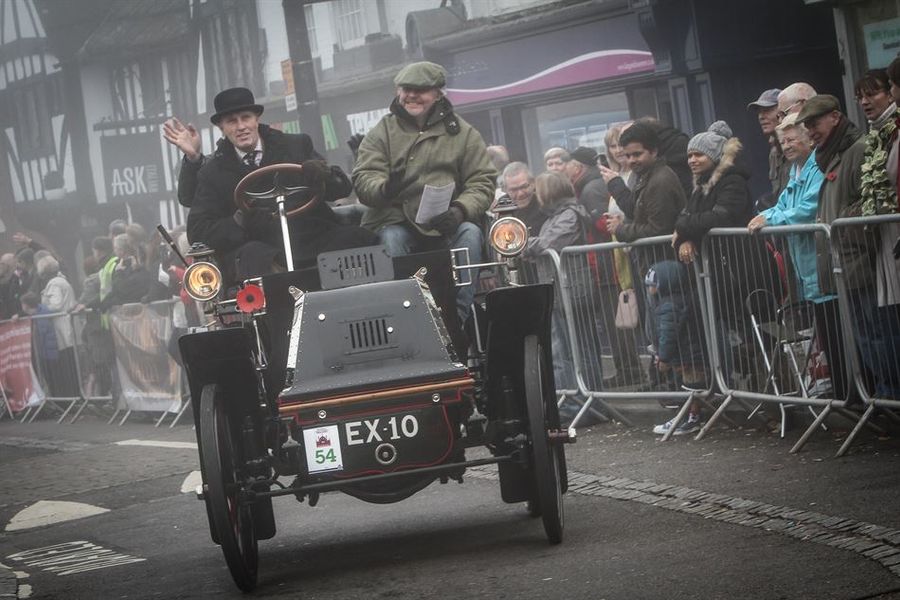 The 2016 Bonhams London to Brighton Veteran Car Run – the world’s longest running motoring event – will celebrate inventor Karl Benz’s 130-year old patent, granted on January 29th 1886, and the early days of German motoring when the annual pilgrimage of veteran cars makes its way to the south coast in November. The run commemorates the early days of motoring and the visionaries who developed the early cars - without whom we would not have the historic motorsport we enjoy so much.
The Benz Patent Motorwagen (patent number 37435) was a two-seater, three-wheeler, powered by a single cylinder four-stroke engine mounted at the rear. Its first public demonstration run was not hugely successful – difficult to control, it collided with a wall.
Significant modifications meant that successful tests on public roads were carried out in the summer of 1886 and two years and further improvements later, the ‘Mk III’ version was offered for sale, becoming the world’s first commercially available automobile.
Alongside Benz, of which there were six examples on the 2015 Run, the organisers are hoping to see veteran cars from manufacturers such as Adler, Bergmann, (German-built) Daimler, Lutzmann, Mercedesand Opel tackling the 60-mile run from London’s Hyde Park to Brighton.
As ever, the Run – a Royal Automobile Club event since 1930 – will take place on the first Sunday on November, which this year falls on the 6th. The first cars will leave Hyde Park at sunrise where more than 400 three and four-wheelers make their annual pilgrimage to the Sussex seafront. The Run is open to all vehicles built before 1905 - so even the youngest on the Run therefore being more than 110 years old - and while most will be petrol-powered there will be some powered by steam and, proving there’s nothing new under the sun, a handful will be battery-powered electric vehicles.
The Run itself will also be celebrating an anniversary this year. The very first ‘Emancipation Run’ from London to Brighton was held in November 1896 – 120 years ago – and marked the passing into law of the Locomotives on the Highway Act which raised the speed limit for ‘light locomotives’ from 4mph to 14mph and abolished the need for the vehicles to be preceded by a man carrying a red flag.
Tom Purves, Chairman of the Royal Automobile Club, said: “Karl Benz and his wife Bertha, who, in 1888, undertook the first long distance journey by car, were far-sighted automobile pioneers… but even they would be amazed by the role the car plays in 21st Century life. It is highly fitting that the 2016 Bonhams London to Brighton Veteran Car Run should honour Benz, his contemporaries and his country’s role in the history of the motor car.”
‘The Run’ is just one element of the Royal Automobile Club’s London Motor Week – a seven day celebration of motoring, which includes an art exhibition, motoring heritage lectures, a motoring forum and a motoring book awards evening. The penultimate event in the week is the free-to-view Regent Street Motor Show, on Saturday 5th November, turning London’s premier shopping street into a motoring showcase that puts the spotlight on veterans and moderns alike, before the week is rounded off with the Club’s premier event – the Bonhams London to Brighton Veteran Car Run.
–Karl Benz’s 130-year old patent The Benz Patent Motorwagen 2016 Bonhams London to Brighton Veteran Car Run