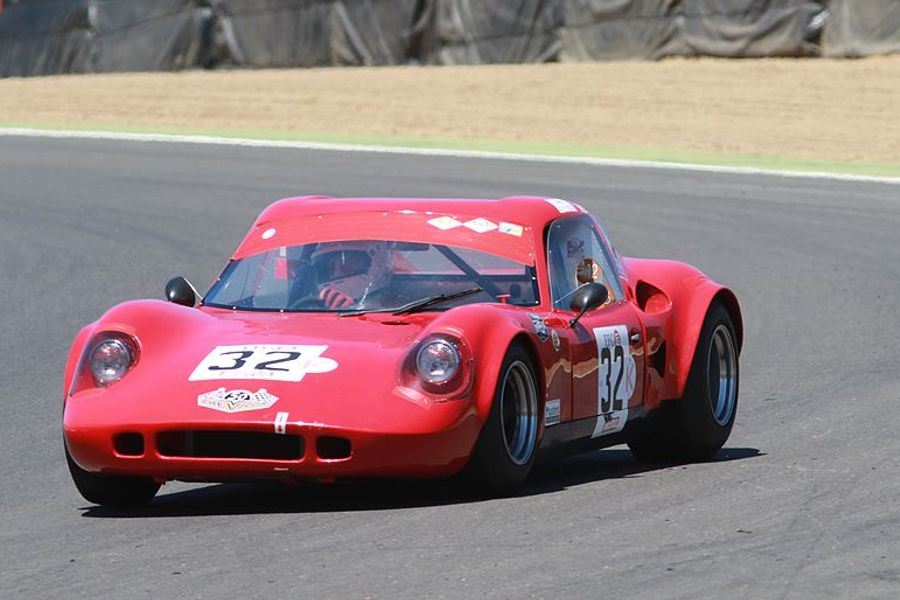 For the first time, a dedicated race will be held for the B8s and the earlier, but very similar, B6s. Three B6s are due on the grid and there is even a rare B4 coming from Sweden with marque enthusiast Kent Abrahamsson to show the earliest iteration of one of the most successful projects from talented designer and engineer Derek Bennett, the founder of Chevron.

To mark this unique celebration, Chevron racers from the 1960s and early 1970s will be on hand on Monday and Chevron employees from the B6/B8 era will also be out in force. The two class winners from this fantastic race will jointly be awarded the famous Oulton Park Gold Cup.

The entry includes a clutch of quick cars, including those of Martin O’Connell/Sandy Watson, Andy Wolfe, Charles Allison, Philip Nelson, Ross Hyett/Andrew Kirkaldy, Alec Hammond/Nigel Greensall, Dan Eagling and father and son Craig and Adam Jones. Nick Thompson and Sean McLurg top the B6s while father and son Hugh and Mark Colman make a very welcome return after their B8 was badly damaged at Brands Hatch more than a year ago.

As 2018 marks the 60th anniversary of the British Touring Car Championship, the HSCC Super Touring Car Challenge features the cars from one of the most successful and exciting chapters in the BTCC story.

Former BTCC champion and racing legend John Cleland tops the entry in his Vauxhall Vectra. Cleland was a BTCC star on and off the track and his passion for these cars remains undimmed. Local ace Jason Minshaw is back behind the wheel of the Volvo S40 that was raced by 1998 BTCC champion Rickard Rydell at the Silverstone Classic last month and will be very quick at a circuit he knows extremely well. More local knowledge should serve Mark Jones well in his Renault Laguna.

The final instalment of the HSCC Pre ’80 Endurance Series for 2018 will feature a diverse grid of sports-racing and GT cars for two half-hour races as the category makes its Oulton Park debut.

On a weekend that has a strong Chevron flavour, there is a strong possibility of two more Chevron wins as a marque ace John Burton heads the field in his B26. Among the big bangers, the versatile talent of Calum Lockie and the huge 8-litre March 717 Can-Am car will be outstanding.

The best field of the season will line up for round six of the HSCC Guards Trophy for Pre ‘66 GT cars and Pre ‘69 sports-racing cars. Sunday’s 40-minute race will feature pit-stops and driver changes for a tremendous range of cars and the 2018 champion could be crowned if John Davison takes another class victory in his superb Lotus Elan 26R.

At the head of the race will be the sports-racing cars, and a clutch of Chevron B8s will be racing ahead of their dedicated 50th anniversary race on Monday. Yorkshiremen John Waggitt and Peter Needham have been consistently quick in their Lenham, while leading Chevrons include those of Charles Allison and Philip Nelson. Adding spice to the sports-racing field is the fabulous Lotus 30 of Japanese racer Katsu Kubota and St Helens star Andy Middlehurst.

The penultimate round of the 2018 Jaguar Classic Challenge will run over 40 minutes on Sunday afternoon. The battle at the head of the race is set to be among a pack of quick E-types and father/son combo Graeme and James Dodd makes a very strong partnership. At Silverstone in June, James went solo in ever-changing conditions to take a resounding win.

Another fine field of cars will contest round 10 of the HSCC 70s Road Sports Championship. The absence of Charles Barter (Datsun 240Z) due to a family wedding opens the door for Jeremy Clark to capitalise in his Lotus Elan. In his class, Clark faces no less than six Lotus Europas including those of Will Leverett, former champion Jim Dean and the equally rapid Paul Tooms. However, the major contender for overall spoils could well be Russell Paterson in his Morgan Plus 8.

It is also proving to be a fine season for the HSCC Historic Road Sports Championship and another fabulous grid of production sports cars from the 1960s will contest round 10 of 13. Three drivers are closely matched at the head of the points and when dropped scores are factored in, Dick Coffey (Turner Mk1) and John Davison (Lotus Elan) are dead level with Kevin Kivlochan (Morgan Plus 8) only six points adrift.

David Walton and Andrew Storer have been the consistent scorers, but reigning champion Andrew Park could yet mount a late charge for another title. Callum Grant and Benn Simms are both major contenders and have each won twice in limited campaigns, while Ian Pearson is another potential winner. From the URS ranks, Chris Lord and Andy Lancaster are key players.

With nine wins from 10 races to date this season, Jon Milicevic has one hand on the HSCC Historic Formula 3 Championship crown. Two more wins could even settle the matter at Oulton Park. Aside from a non-finish at Brands after an engine drama, Milicevic remains unbeaten in his Brabham BT21B. However, this has not been a cruise for Milicevic and he will relish the return of his friend and rival Andrew Hibberd in the ex-Chris Irwin Brabham BT18.

Two races on Sunday will make up round nine of the FJHRA/HSCC Silverline Historic Formula Junior Championship with separate grids for the front and rear-engined divisions.

Defending champion Peter de la Roche is at the head of the points in his Lola Mk3 and the Sandbach youngster will be aiming for another class maximum score. However, the absolute pace in the race for rear-engined cars is likely to come from the Lotus pack. Jack Woodhouse should set the standard in his Lotus 22, with opposition from the similar cars of Katsu Kubota, Andrew Hayden and Adrian Russell.

There could even be a Woodhouse double as Jack’s father Mark heads the front-engined entry in his Elva 100, but he has rivals in the form of Alex Morton (Condor) and the front-wheel drive Bonds of Mike Walker and Andrew Tart.

Just three points split Ben Mitchell and Cameron Jackson in the HSCC Historic Formula Ford Championship as a single race on Monday marks round 13 of 17 in this most fiercely contested of championships. This is now firmly a two-way contest and last time out at Croft a double win for Jackson pared Mitchell’s advantage back to just three points.

Monday’s schedule also features a double header for the HSCC Historic Touring Car Championship and an excellent field of cars will contest rounds nine and ten of 14. With Mini Coopers and Hillman Imps taking on Ford Anglias, Lotus Cortinas and Ford Mustangs, the racing is always exciting. The title battle is still pretty open and it is Hillman Imp racer Adrian Oliver who has a small points’ advantage in his mission to add to the hat-trick of titles he won early in the millennium.

A welcome high-profile guest race on Monday is a round of the Historic Touring Car Challenge from the Motor Racing Legends organisation with three Ford Sierra RS500 Cosworths and three BMW M3s heading an excellent 25-car entry. As well as the Group A cars, a strong field of earlier cars will contest the concurrent Tony Dron Trophy for Group 1 racing saloon cars, including six Ford Capris and three Rover SD1s.