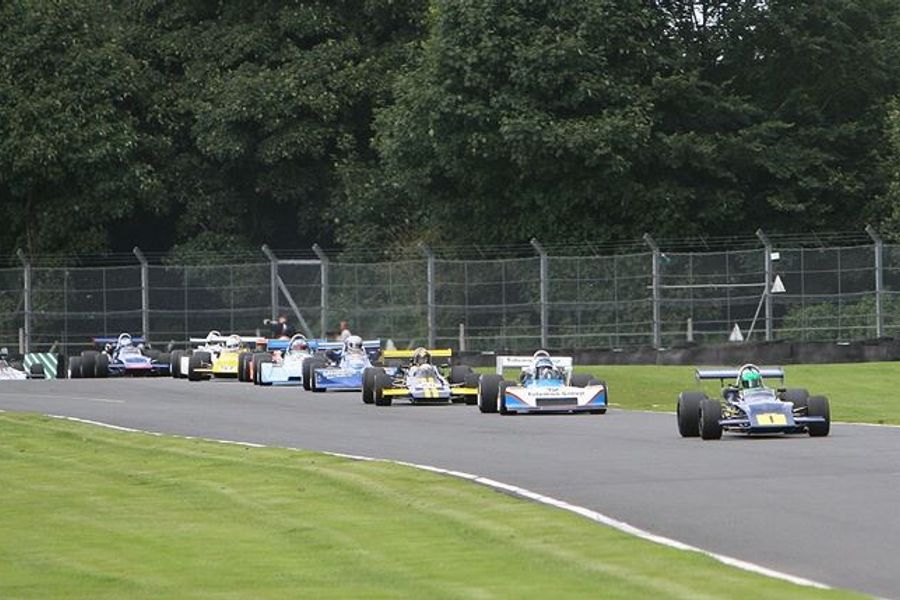 A fine entry of Historic Formula 2 cars is one of the headline stories for the Historic Sports Car Club’s Oulton Park Gold Cup meeting over the August Bank Holiday weekend (26th-28th August).
With 21 races across Sunday afternoon and Monday and over 300 entries for the weekend, the 2017 Gold Cup will be a fitting celebration of the racing heritage of the magnificent Cheshire track. Running alongside rounds seven and eight of the HSCC Historic Formula 2 FIA-sanctioned International Series will be high-profile races for the Jaguar Classic Challenge, the HSCC Super Touring Trophy and a welcome guest appearance from the Historic Touring Car Challenge. Add in a packed weekend of regular HSCC categories including the crowd-pleasing Historic Formula Ford Championship and Historic Touring Car Championship and it should be a tremendous weekend.
An excellent entry of 23 cars for the Historic Formula 2 races includes Irish ace Darwin Smith who will be making his first appearance of 2017 in his March 722. He will take on other pacesetters like Richard Evans (March 742) and Daniel Gibson (Chevron B42P), while Frenchman Robert Simac will be aiming to retain his championship lead as he bids for a record fifth straight title. Also in the field is period F2 racer James King from America, F2 newcomer Julian Stokes (Tecno) and drivers from Germany, France, Sweden and Australia.
Three touring car race series, for cars spanning 1960 to 2000, will feature as the Super Touring Trophy, Historic Touring Car Challenge and the HSCC Historic Touring Car Championship uniquely share the same bill.
Four of the weekend’s five touring car races run on Monday, including the Oulton Park debut for the HTCC from Motor Racing Legends. The 50-minute pit-stop race features cars from the 1970s and 1980s and is topped by the Rover Vitesse of Steve Soper and Chris Ward. Italian ace Gianfranco Brancatelli (Ford Sierra RS500) heads the Super Touring grid while the Pre ’66 pack includes Minis for former BTCC and current GT racer Sam Tordoff, Jonathan Lewis and Chris Middleton.
Callum Grant will bid to get his Historic Formula Ford 1600 Championship title bid back on track after losing the series lead to Michael O’Brien last time out at Croft. Grant, the reigning champion, will arrive at his local track with a 32-point deficit ahead of rounds nine and 10 of 14 this season. Added to the fantastic quality field for four races are Benn Simms, brothers Sam and Ben Mitchell, Richard Tarling, Benn Tilley, Max Bartell, Ed Thurston and Darwin Smith in the unique Smith Special built by his father.
As is now traditional at Oulton Park, the Guards Trophy grid is split into two races, one for the sports-racing cars and one for the GT cars. Both will run over 40 minutes on Sunday afternoon and in the GT contest a quartet of TVRs take on the AC Cobras of Robert Bremner and Paul Gibson. Philip Nelson’s Chevron B8 and the Elva Mk7 of Max Bartell and Ben Mitchell will be prominent in the sports-racing battle.
With a total entry of 50 cars, the twin HSCC Road Sports categories continue to be in fine health. The Historic Road Sports Championship opens the racing with the Morgan Plus 8s of Kevin Kivlochan, Will Plant and Tim Pearce taking on the Lotus Elans of Peter Shaw and John Davison. In the 70s Road Sports Championship, Russell Paterson (Morgan +8), Jim Dean (Lotus Europa), Charles Barter (Datsun 240Z), Julian Barter (Lotus Europa) and racing legend Richard Attwood (Porsche 928) are key contenders.
The Derek Bell Trophy contenders have a stand-alone race on Sunday then share a race with the Classic Racing Cars on Monday. The Formula 5000s of Neil Glover and Greg Thornton head the DBT pack while the Pallisers of Andy Jarvis and Steve Worrad top the CRC runners.
The penultimate round of the Jaguar Classic Challenge is a key feature of Sunday and a top quality field includes E-types, XK120s and Mk1 Saloons. Father and son Graeme and James Dodd will be at the head of the action along with local ace Jason Minshaw, Jamie Boot and Ben Short.
Finally, in action on Monday will be the HSCC Classic Clubmans Championship and the HSCC/FJHRA Silverline Historic Formula Junior Championship. The Mallocks of Mark Charteris and John Harrison will head the Clubmans while Benn Tilley, John Sykes and Katsu Kubota will be leading Junior contenders across a pair of races.
On Saturday, qualifying starts at 11.35 after testing from 09.00
On Sunday, the first of ten races will be at 12.05
On Monday, the first of 11 races will be at 10.45 after qualifying from 08.30