Thirty Plus Field for HTC at Eastern Creek 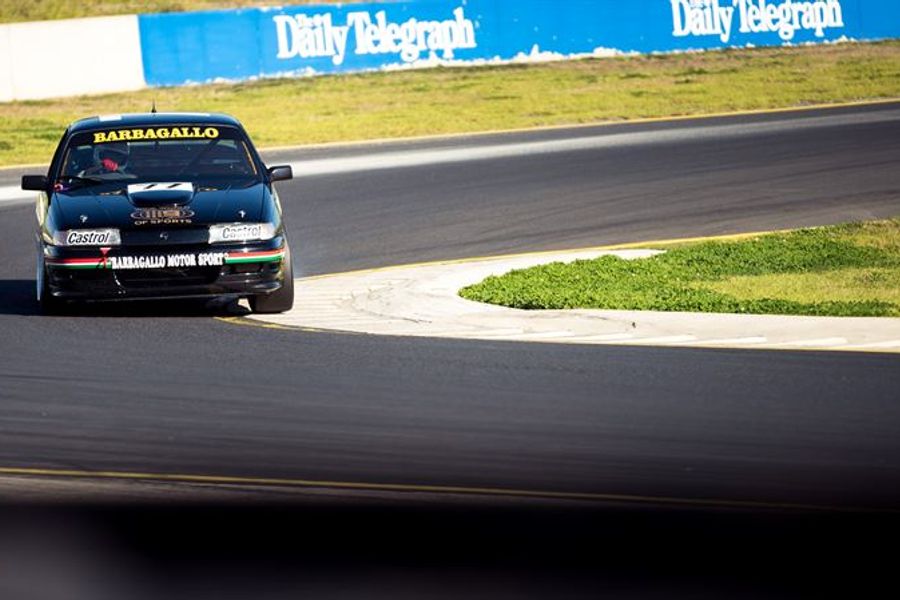 Australia’s Queen’s Birthday long weekend on June 11th and 12th sees a big field of historic Group C & Group A Touring Cars racing at Eastern Creek’s Sydney Motorsport Park as the Heritage Touring Cars series visits. With a record grid of 30-cars entered, all vying for points in the Championship, racing will be close and lap records are expected to be under threat.

In their first New South Wales appearance of 2016 the field will compete for class and outright honours in round three of the 2016 Heritage Touring Cars Championship.

Headlining the race for overall victory in Group A will be Tony Alford in the 1991 Sandown 500 winning “Godzilla” GIO Nissan Skyline GT-R, fresh from a dominant performance at the first two rounds of the championship. Hot on the heels of the Japanese monster will be two of the fire-breathing Ford Sierra RS500 rocket ships that dominated Touring Car racing in the late ‘80s. Group A reigning champion Carey McMahon has brought the last Benson & Hedges Sierra out of hibernation to challenge the ex-Glenn Seton Peter Jackson Sierra of Anthony Compton.

Also running fuel-injected, turbo power is a Volvo 240, the same model that won the ATCC in 1986 and the immaculately restored NetComm Skyline RS that was run by the legendary Murray Carter in its heyday.

Five-litre V8 power will be in abundance, with five Holden Commodores and two Ford Mustangs taking on the high-tech turbo cars and flying the flag for fans of old school Muscle.

Two spectacular ‘Walkinshaw” spec fuel injected VL Commodores, including the HRT car shared by Win Percy & Neil Crompton in the 1989 Bathurst 1000, will put on a sight and song not to be missed.  Both ends of the Group A Commodore spectrum will be covered with the Masterton Homes VK Commodore in its original spoilerless ’85 guise competing against the fuel injected, 6-speed Barbagallo Castrol VN Commodore in the same class.

Gunnedah’s Greg Keam has recently completed an immaculate restoration of the Ford Mustang which holds the extraordinary honour of having taken part in Australia’s first and last Group A Touring Car races.  Event director Terry Lawlor is expected to provide strong competition in what will be his first competitive outing in the famous Greens-Tuf Mustang.

Of course it wouldn’t be a true historic meeting without a classic English thoroughbred, so Tony Pallas will be running the ex-Garry Willmington Jaguar XJ-S, powered by 5.3 litres of magnificent V12 engine.

The under three-litre class will have a distinctly Bavarian flavour.  Sydney’s David Towe and his JPS BMW M3 had a dominant weekend in round one at the Phillip Island Classic and he will be looking to bounce back after a character-building round two in Queensland last month.  He will face a strong challenge from a car he used to own – the ex-Tony Longhurst JPS BMW M3, fresh from a full rebuild by the team at Bowden’s Own.  Another car new to this event is a JPS BMW 325i, completing a trifecta of the magnificent Frank Gardner-built machines.

Back in the day, the under two-litre class of Group A was dominated by Toyota’s giant-killing 16v Twin Cam Corollas and it’s no different today. An ex-Bob Holden Corolla Sprinter will be fighting one of his ex-TOM’s GB Corolla FX-GTs, to be driven by the man himself, 1966 Bathurst 500 winner, Bob Holden. The only time the Toyotas were beaten in the baby class was in 1987, when Mark Skaife won the title in the Gibson Motorsport Peter Jackson Nissan Gazelle.  Current owner Brian Henderson will be expecting a repeat performance in the two-litre rocket.

Group C outright honours will be hotly contested by a six-pack of Aussie V8s and two of the fast, nimble and loud, rotary powered Mazda RX-7 sports cars, both of which have won the Heritage Touring Car series Group C championship in recent years.

The V8 contingent includes the famous Army Reserve XD Falcon and the sinister black Falcon raced in the day by Jim Keogh, both of them powered by Henry's famous 351 Cleveland engine. Holden fans can see the VH Commodore that was shared by Scotty Taylor and Kevin Kennedy at the beginning of their record-breaking Bathurst partnership, as well as a genuine L34 Torana that raced in the Sandown enduro in the mid ‘70s.

Those will be joined by a pair of A9X Torahs including an ex-Team Brock Bill Patterson Holden car and the famous Cadbury Schweppes car that was shared by Peter Janson and Larry Perkins. I wonder if the driver today will be throwing Cherry Ripes to the crowd over the fence...

Group C under 2-litre honours will see a classic Holden vs. Ford battle in miniature with an ex-Bob Holden Ford Escort RS2000 keenly chased by a pair of rare Japanese PF60 Geminis, both of whom are running in the top 3 of this year’s Group C Championship, after strong runs in the previous two rounds.

Round one of the Championship was held at the prestigious Philip Island Classic in March and the second meeting was at Queensland’s Morgan Park country circuit just six weeks ago. After this event the cars travel to Winton in August, then back to Sydney Motorsport Park for the Muscle Car Masters in October for the final round of 2016.