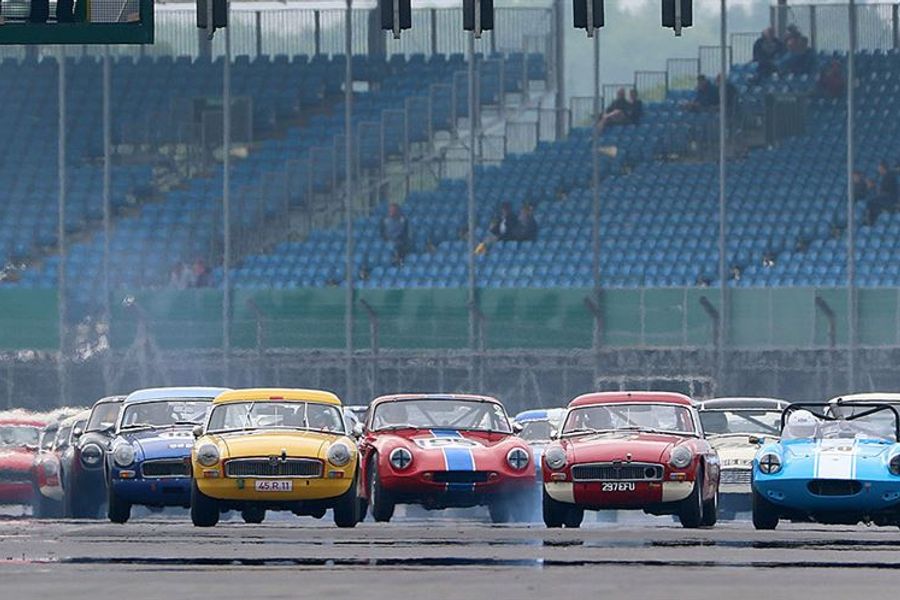 A mighty Equip GTS field was a feature of the MGCC’s MG:Live! meeting at Silverstone last weekend, with fifty-eight cars on the grid and putting on a fine display of close racing, all highly competitive with the top three competitors all qualifying within half a second.
Silverstone saw the third round of the 2016 Equipe GTS series, which came under new management in 2014 and has been going from strength to strength. A maximum thirty-four cars lined up at Brands Hatch on the 30th of April for the second race of the season and last weekend the series enjoyed its largest grid  ever for the double-header race weekend at MG Live.
Equipe GTS club competitors range from 18 to 80-years-old. All of which compete either solo in the two 30-minute races, or with co-drivers in the longer 40 minute races which have a mandatory pit stop. Entry fees are kept as low as possible to ensure the club concentrates on providing value for money and a good social atmosphere for drivers outside of the racing.
Equipe GTS is an independent series run by John Pearson and Rob Cull – who both race in the series. When asked about the success of the series John Pearson commented “This is a series for Drivers run by Drivers, we have been working hard on putting the club camaraderie back and building a good paddock atmosphere with the racing being just one part of the weekend.”
“There is no such thing as cheap racing but the Equipe GTS cars are an era where the classics are still affordable and really fun to drive and we have seen lots of new drivers this year including many ‘Dads & Lads' for the pit stop races. The racing is close, clean and hugely enjoyable.”
John also mentioned about their success “We give back to club competitors as much as they put in, so where possible we keep entry fees low, provide free jackets and paddock hospitality. The fact the grids are so packed is encouraging and it has worked out better than we could ever have imagined.”
Equipe GTS is a series for smaller engined pre 66 FIA cars running to Appendix K regulations. The grids encompass MG, Triumph, TVR, Healey, Lotus, Morgan and others providing great racing with affordable race entry fees.
2016 Equipe GTS series