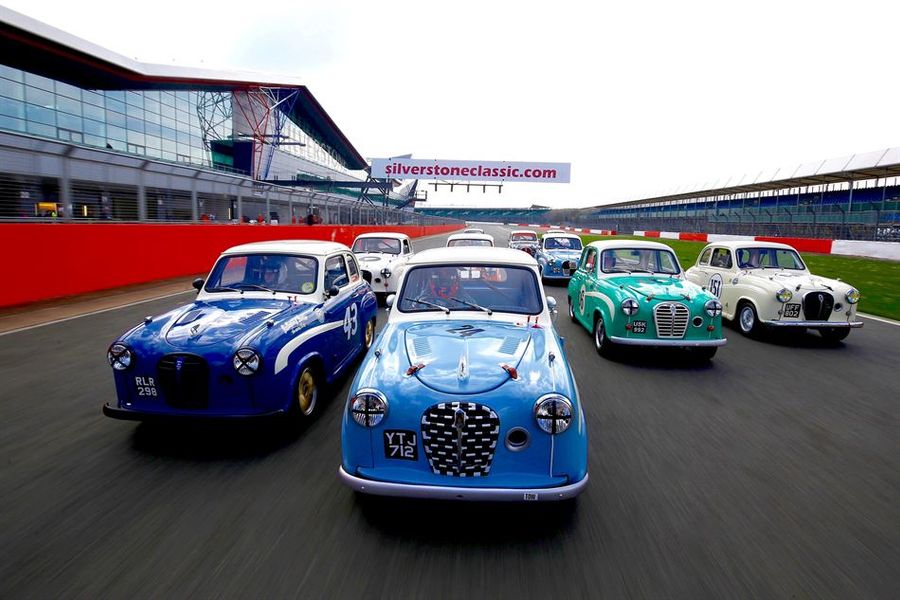 World and Olympic champions, chart-topping musicians, best-selling authors and familiar figures from TV and radio will all be on the grid for the inaugural Celebrity Challenge Trophy Race at this month’s Silverstone Classic (28-30 July).
The stellar big-name line-up features no fewer than five gold medal-winning athletes. These are topped by Jason Kenny CBE who, along with fellow track cyclist Sir Chris Hoy, is Britain’s most successful Olympian having amassed no fewer than six gold medals.
Other sportsmen revving up at Silverstone include 500cc World Motorcycle Champions Wayne Gardner and ‘Fast’ Freddie Spencer plus three-time boxing World Champion, Carl Froch.
Famous musicians are out in force, too – notably Howard Donald from chart-toppers Take That and Brian Johnson, who fronted rock legends AC/DC for over 35-years. Crime writer Peter James is another best-seller on the grid alongside a host of TV personalities including Ant Anstead (Wheeler Dealers), Tiff Needell (ex-BBC Top Gear) and Theo Paphitis (Dragons’ Den).
In keeping with the event’s prominence as the world’s biggest classic motor racing festival, these luminaries will all be racing flat-out in an evocative field of Austin A30 and A35 saloons from the late fifties. The cars have been kindly provided by members of the HRDC (Historic Racing Drivers Club) Academy who have their own race on the Sunday of the event.
Celebrities have been split into five teams representing their professions, and each team will be mentored by a renowned racing driver. Three of these are former F1 aces – Mark Blundell, Martin Donnelly and Rupert Keegan – the other two are touring car heroes: Anthony Reid and Steve Soper.
The celebrities and their team leaders will qualify and race on Saturday, and have the opportunity of winning the charity prize fund of £10,000 for the event’s official charity, Prostate Cancer UK.
“What an amazing line-up,” enthused Nick Wigley, CEO of organiser, Goose Live Events, who also explained the vast commitment that everybody involved has been making to pull off such an extraordinary high-profile spectacle. “The majority of those competing have never raced before, so they’ve all been put through their paces by those at the Silverstone Motorsport Academy to obtain their MSA race licences and have been learning the complexities of the GP circuit on a range of track days.
“Inevitably, with very busy diaries, a few such as Sir Patrick Stewart and Mike Gatting have had to drop out due to filming and personal commitments, but the final grid is every bit as impressive as we’d hoped. It’s going to be a lot of fun and the presence of so many personalities will add yet another dimension to what is already an incredible three-day event.”
Indeed, the Celebrity Challenge Trophy is one of 22-amazing races putting the spotlight on more than 80-years of glorious motor sport history.
SILVERSTONE CLASSIC CELEBRITY CHALLENGE TROPHY RACE
Going for Gold
Anthony Reid (team captain)
Amy Williams MBE
Jason Kenny CBE
Jonny Searle MBE
Greg Searle MBE
Mark Hunter MBE
Rocking & Racing
Martin Donnelly (team captain)
Brian Johnson
Howard Donald
Peter James
Neil Primrose
Bike Legends
Steve Soper (team captain)
Wayne Gardner
Freddie Spencer
Steve Parrish
Maria Costello MBE
Screen Stars
Mark Blundell (team captain)
Theo Paphitis
Ant Anstead
Vassos Alexander
Tony Jardine
Tiff Needell
SKY Sports Stars
Rupert Keegan (team captain)
Carl Froch MBE
Orla Chennaoui
Mike Wedderburn
Johnny Nelson

Podcast: Marcus and the Team with Peter Snowdon and David Hinton