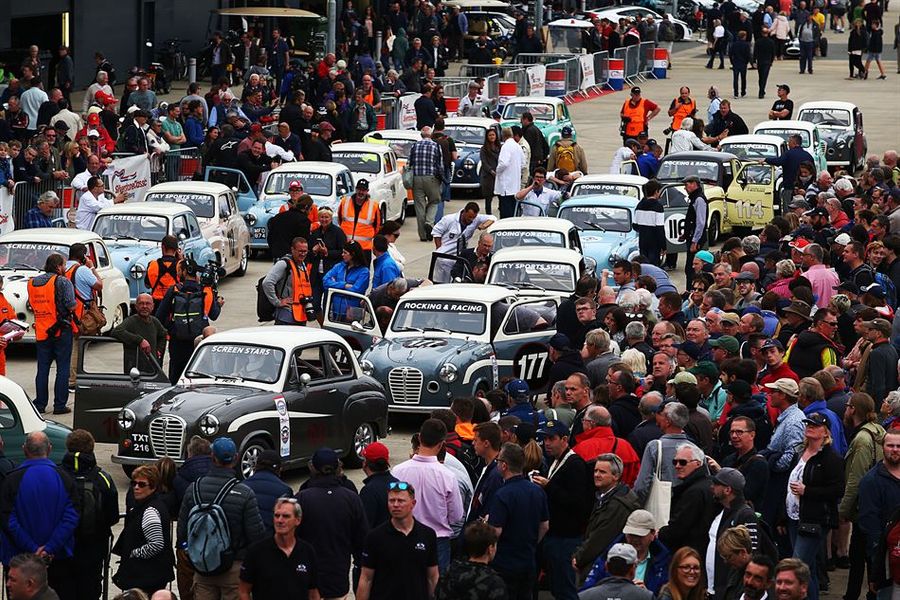 The Silverstone Classic not only served up an unrivalled banquet of action and entertainment both on and off the famous Grand Prix track but also raised record funds for Prostate Cancer UK, the event’s Official Charity Partner. To date, more than £45,000 has been donated with significant contributions coming from a number of different activities and initiatives running throughout the world’s biggest classic motor racing festival.
The Celebrity Challenge Trophy race, which saw famous personalities from sport, showbiz, music and media all competing in HRDC Academy Austin A30s and A35s on Saturday evening, generated nearly £20,000. Thanks to the enthusiasm of both the participating celebrities and the HRDC Academy race car owners who enjoyed their own race on Sunday, the initial £10,000 prize fund provided by the Silverstone Classic has been almost doubled via various JustGiving campaigns.
The highly popular eBay RESTORATION LIVE showcase was another major contributor. The 1984 Ford Capri – painstakingly restored in public during the event using parts only purchased on eBay – was subsequently sold on eBay for £17,015, raising funds for Prostate Cancer UK.
The generosity of ticket purchasers was also important. More than £4,500 was donated by those buying online, with further funds coming from show-goers via collections made during the three-day festival.
Two other notable benefactors were the Range Rover Register, one of more than 120 car clubs attending the Classic, and JET – the event’s Official Fuel Partner and sponsor of the family entertainment-themed JET Village Green.
“I’m really proud of our fundraising achievements at this year’s Silverstone Classic and must thank all those involved for their truly outstanding efforts,” said Nick Wigley, CEO of event organiser Goose Live Events. “I know Prostate Cancer UK will benefit from the substantial amounts that have so generously been donated by so many of those involved in the event but, more importantly perhaps, we have helped to raise awareness of the disease among large numbers of car-loving dads, lads and their families.”
Each year, more than 11,000 men die from prostate cancer in the UK – that’s one man every 45 minutes – and the disease is the most common cancer in men. Funds raised will go towards research into better ways to treat, diagnose and prevent prostate cancer, as well as support for men and their families affected by the disease.
Believing it could help make a difference, in 2016 the Silverstone Classic appointed Prostate Cancer UK as its first Official Charity Partner in a three-year relationship.
James Beeby, Director of Fundraising at Prostate Cancer UK, said: “We’re incredibly grateful to The Silverstone Classic and Goose Live Events for supporting Prostate Cancer UK for the second year running and raising such a phenomenal amount of funds. This partnership offers the perfect platform to reach large numbers of men and their families, and not only raises funds but awareness, too. Prostate cancer won’t beat itself. It’s a race against time but we believe if action is taken now we can stop the disease being a killer.”
Anyone still wanting to make a donation to Prostate Cancer UK can do so at: https://www.justgiving.com/campaigns/charity/prostatecancer/silverstoneclassic2017.