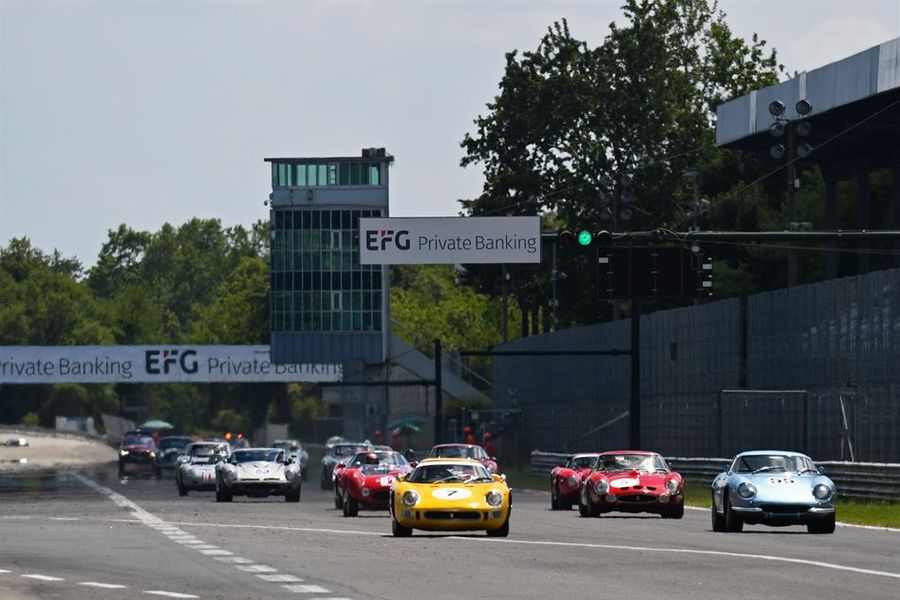 Last weekend, the Monza circuit was the scene of the second Monza-Historic. It gave the seven Peter Auto grids and the guest event, the FIA Lurani Trophy and its Formula Juniors, the opportunity to bring the past back to life on this track which is one of the fastest in the world, and on which some of the greatest pages in the history of motor sport have been written.
Thus the 200 historic racing cars divided up among Classic Endurance Racing 1 & 2, Sixties’ Endurance, Heritage Touring Cup, Trofeo Nastro Rosso, Group C Racing, Euro F2 Classic and FIA Lurani Trophy were able to do battle over three days on the very demanding 5,793 kilometres layout, which puts engines and brakes under extreme stress.
While light rain fell during the Sixties’ Endurance event leading to a few tank slappers in the famous Parabolica, the other races took place on a dry track in good weather. In these conditions drivers were able to give full rein to their skills, and this led some mind-boggling duels in some of the events starting with Classic Endurance Racing 1 in which Carlos Monteverde’s Ferrari 512 M and Claudio Roddaro’s Porsche 917 battled for the lead for more than 50 minutes. In the end victory went to the Italian car after the Porsche had to retire due to a mechanical problem.
There was another great scrap in the Group C race between Kriton Lendounis/Rui Aguas’ Mercedes-Benz C 11 and Ivan Vercoutere/Ralf Kelleners’ Porsche 962C, which won.
In the Heritage Touring Cup, Dominik Roschmann’s BMW 3.0 CSL and David Huxley/Nigel Grennsall’s Ford Mustang GT Pinepac went head-to-head for first place for two-thirds of the race until the latter began to fall back letting the car from Munich roar on to victory.
Among the well-know drivers who took part in the second Monza-Historic were Jacques Laffite in CER1 in a Lola T70 MkIII shared with Philippe Vandromme, Paul Belmondo in CER2 in a Chevron B12 and Italian Alex Caffi in the same grid in a Lancia Beta Montecarlo Turbo.
Perhaps the highlight of the drivers in the Sixties’ Endurance stay in Italy - something which they will never forget - was the prize giving dinner on Saturday evening in the Museo Storico Alfa Romeo that tells the story of the make from Biscione from 1910 to 2010. It gave them the opportunity to see iconic cars as well as unique lesser-known models that have contributed to the legend of the manufacturer from Milan.
The next rendezvous for all the entrants in the Peter Auto series is the first Hungaroring Classic between 29th September and 1st October in Hungary. In the meantime Group C Racing fans can head for Silverstone Classic on 28th to the 30th of July to watch the fifth round of the season. Lovers of exceptional cars and the French art de vivre are invited to Chantilly Arts & Elegance Richard Mille on 10th September for a unique celebration of Ferrari’s 70th anniversary, as well as a display of the most beautiful cars in the world plus the concept cars taking part in the Concours d’Etat and Concours d’Elégance.